Last season many pundits had the Suns right at the bottom of the Western Conference. They correctly prophesied a wretched season. Likewise, the NBA Rank glitterati didn't issue stellar individual marks to the Suns' cast of misfits. How did this year's version score?

The Suns participation in this year's NBA Rank edition ended at spot #63 with the appointment of new acquisition Eric Bledsoe. The Suns actually weren't even the first team to bow out of the convivial collaboration, though. Shockingly, they were fourth. But more on that later. Let me begin this examination with a history lesson.

*The NBA Rank system is a predictive tool (a very shaky one). All rankings are based on expected player performance for the upcoming season. 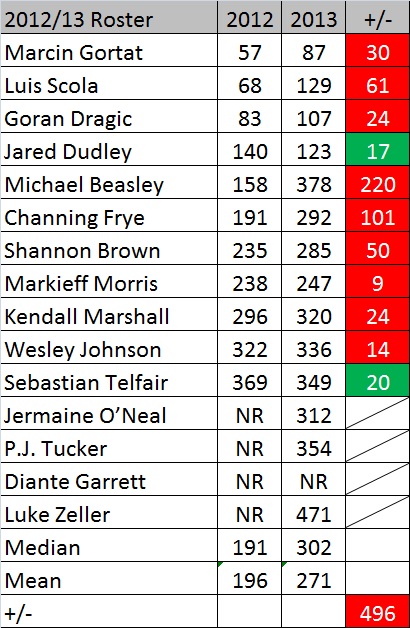 This chart depicts the rankings of last season's opening day roster. I know many of us are trying to efface the memories of last year's ineptitude, but this is unfortunately necessary to illustrate my ultimate point.

Allow me to introduce a mechanic I will employ to assign a player's position in terms of roster depth. If all of the players in the league were subject to a fantasy draft by virtue of their NBA rank score, given 30 teams, the top 30 players would be the best on a team, 31-60 would be the #2 starter... 151-180 would be the sixth man, etc. By this metric, the Suns (according to the geniuses involved with the NBA Rank compilation) nearly had five starter quality players last season and sported eight players worthy of top eight rotation spots. With the obvious exception of top end talent, one could construe that the Suns may have had at least a marginally competitive roster...

But that would have been specious logic. And the vast majority gave no credence to this type of perspective as the prevailing opinion was that the Suns would be one of, if not the, worst team/s in the Western Conference. Despite the clamor from the Brightside that some of these people were ignorant haters (We couldn't be that bad, right?), they ended up being right (for a change).

And these doom merchants predicted our chthonic descent without suggesting that Michael Beasley would be the very worst player in the entire league that was given a significant number of minutes! I sanguinely slotted the Suns higher than the basement, but ultimately gave myself an escape route noted that the play of Beasley and Markieff Morris would be the most important factors in the Suns' success results. Dammit.

Interestingly, every single Suns player who returned from last season received a lower ranking than the previous year. I disagree with a couple of their decisions (which I will elaborate on below) that seem to be misinformed snubs, but I think they kind of got it right even though they may have took a circuitous route. And while the Suns muddled their way to 25 wins last season, the new rankings reveal that the Suns would have been even worse if they kept the band together....

Also, how in the hell can they justify the claim that there are 122 players worse than Beasley? 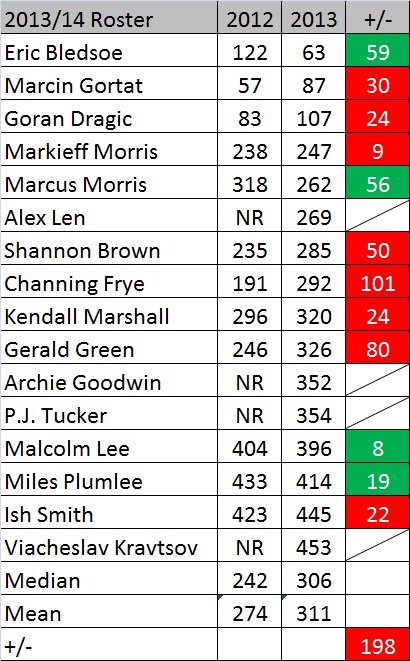 Now we move on to the upcoming 2013-14 season. This is where things get even more insulting interesting. The Suns median and mean drop from 191 and 196 to 306 and 311, respectively. The team goes from eight players in top eight roster spots to three. Three. The Suns only have three players on this team worthy of meaningful minutes. While the Suns traded for their predicted best player, they also acquired four of the bottom 105 players in the league. And while four players are expected to improve this season, double that (eight) are expected to erode.

Arbitrarily using the mean value to augur wins this season (311/196 = 1.58, 25/1.58 = 15.82) the Suns should be on the orange and purple brick road to 16 wins. Keeping the band together would have made the team worse, but this accomplishes the feat in even more spectacularly catastrophic terms.

Now I get to disagree...

Goran Dragic should be ranked higher than #107. Point guard is the deepest position in the league and Goran should probably be 15-20 at that spot (maybe higher). By that logic, the #83 ranking from last season should be pretty apt. I really don't see him regressing and I'm assuming those that do (I believe incorrectly) think that Bledsoe will stymie his production.

A healthy Channing Frye is not the 292nd best player (10th man) in the league. Considering his progress to this point I think he will easily be a top 200 player. This slotting embarrassingly reveals that the national crowd isn't familiar with the situation. Frye apologists man your stations.

P.J. Tucker (#354) is better than a 12th man who should never see the light of day except in circumstances where there is a +/- 20 point disparity on the scoreboard late in the fourth quarter... His energy and tenacity are valuable enough to overcome his offensive limitations and at least make him an 8th or 9th man that can contribute to a team. But... the proposition of him starting for the Suns this season is telling of the team's woeful nature.

The encouraging play of Miles Plumlee reveals that he may be able to have a positive impact in limited minutes. He does not appear to be a guy who would be damn near the worst player on any roster in the league. Seriously, he's ranked 36 spots below Beasley...

However, I agree that many of these players are just not that good and won't be surprised if Gortat (the Polish Pillow) underplays his ranking (again). The Suns are likely to duplicate their performance of being a bottom five team. That being said, I still take a little bit of exception to this ESPN/True Hoop compilation (mostly because they truly are ignorant haters).

Like I mentioned at the beginning of the article, the Suns still had a top end talent (Bledsoe - #63) higher than three other teams. The nadir of the league is the Orlando Magic (Nikola Vucevic #97), followed by the Philadelphia 76ers (Thaddeus Young #89) and Utah Jazz (Derrick Favors #68).

Below are the 62 players ranked above Eric Bledsoe

<li><a href="http://www.brightsideofthesun.com/2013/10/11/4828882/phoenix-suns-practice-report-marcin-gortat-going-to-run-the-shit-out-it?utm_source=brightsideofthesun&utm_medium=nextclicks&utm_campaign=blogs">Phoenix Suns Practice Report: The Suns are going to "run the sh*t out of it" this season</a></li>

<li><a href="http://www.brightsideofthesun.com/2013/10/10/4823624/phoenix-suns-coaches-are-teaching-at-a-level-we-never-had?utm_source=brightsideofthesun&utm_medium=nextclicks&utm_campaign=blogs">Phoenix Suns coaches are teaching "at a level we never had"</a></li>