Phoenix Suns youth is served, but team not as young as you might think

A great deal has been made of the Phoenix Suns moving entirely to youth this season, with an eye toward getting the most ping pong balls in next May's lottery. But a look at the projected playing rotation says different.

Share All sharing options for: Phoenix Suns youth is served, but team not as young as you might think

The Phoenix Suns will be young this season. Younger than they have been in a very long time. But historically young? No. Young compared to the youngest teams in the NBA? Not really.

After drafting Alex Len (20) and Archie Goodwin (19), acquiring Eric Bledsoe (23) and trading away veterans from last season's rotations ranging in age from Jared Dudley (27) to Luis Scola (32), while also letting 34-year old Jermaine O'Neal walk away, you'd think the Suns got a lot younger this season.

The numbers agree, but not as dramatically as you might think.

Every other player on the current 14-man roster was acquired this summer by incumbent President of Basketball Ops Lon Babby and new GM Ryan McDonough. That's 10 new faces, start to finish. Some were only here in spirit: Caron Butler (32) and Malcolm Lee (23).

Based on final preseason games, the following rotation will likely play out in November (barring any more trades). The rotation excludes Emeka Okafor (neck) and only goes 11 men deep, despite a 14-man roster. Coach Hornacek said it's ideal to play no more than nine men a night, but that this roster would have to go further because of where they are. I went 11. 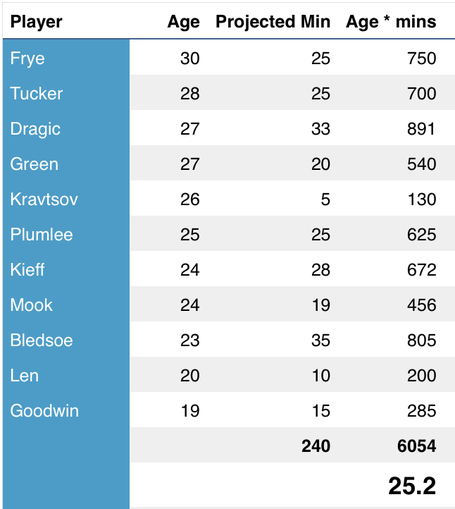 *the formula is quite simple. You just multiply the player's age by the projected minutes, then divide the totals

November's playing rotation will likely be about 25 years old. It's possible that some minutes are off, in fact it's highly likely. But the players are right, and their age is their age. So, the final number for November won't be materially different. Alex Len and Archie Goodwin won't start the season on big minutes, while veterans like Frye and Tucker will take the load.

How does that compare to the rest of the league? That's what I'm here to tell you.

In the spring, I did a whole analysis of the every team's true rotation age using March 2013 stats. 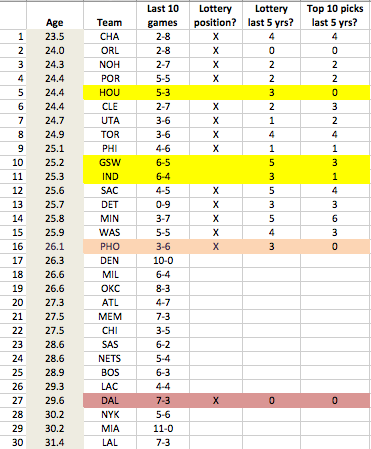 Just how young were the March 2013 Suns?

The 2013 Suns playing rotation was old by lottery standards

That analysis resulted in the following conclusion: even at 26.1 years old, the Suns playing rotation was second-oldest amongst lottery teams. Only Dallas was older. Even worse, three playoff teams were younger than the Suns, and that's not a good thing at all.

But look at the average age of last spring's lottery teams. The current Suns rotation of 25.2 years old, if applied to last year, would still only rank 10th youngest. Out of 14 lottery teams.

Now, of course, as lottery teams settle into the basement of the league, they start playing younger players. The Suns most likely will be playing Alex Len and Archie Goodwin much bigger minutes next March than they will this fall.

The current Suns rotation, if applied to last year, would still only rank 10th youngest in league

But even then, the Suns can't get much younger in a 10-man rotation. With only three players under 24 years old going into the season - Bledsoe, Goodwin and Len - the Suns would be hard-pressed to play the league's youngest rotation. In fact, it would be next to impossible, barring more than trades of veterans for youth.

Still, this team is historically young by Suns standards. You'd have to go back 10 years, to the 2003-04 season to get a younger Suns rotation. Of players who logged more than 1,000 minutes that season, the oldest was Stephon Marbury (26) who was traded after only 34 games.

That was a young group, to be sure. And as we all know, that group formed the core of the resurgent teams of the mid-2000s.

Yes, this is a young Suns team. But youth is relative. It's younger than any Suns team in 10 years.

But next year's team - buffeted by more draft picks - will be younger still. And hopefully, more successful.