The Suns are at a watershed point. It's almost Halloween. Obviously the Phoenix Suns Charlie Brown and tanking/rebuilding/hope the Great Pumpkin are deliciously apropos.

"It's the Great Pumpkin, Charlie Brown" will be shown Thursday, October 31st on ABC at 8:00 ET. The classic Halloween special based on the Peanuts comic strip, created by Charles M. Schultz, first aired in 1966 - predating the Phoenix Suns by two years. If you haven't seen this, I encourage you to do so... it's iconic American culture.

But what exactly does this have to do with the Phoenix Suns?

Well, as Linus would say, "There are three things I have learned never to discuss with people: religion, politics and the tanking/rebuilding strategy Great Pumpkin."

But Linus's belief in the Great Pumpkin symbolizes an unflappable conviction in an ideology even when it may not be popular with the opinion of the majority. Linus, I believe, is a tanker. And Linus and I are cohorts.

There has been much discussion on the concept of tanking relative to the Phoenix Suns over the last few seasons. The word has become trite from overuse and at the same time is still nebulous in that people interpret its meaning in different ways. While the simplest definition to some may be "losing on purpose", it's just not that simplistic. By this logic a team can never take a step back to take two forward. A team can never lose the battle to win the war.

A mantra that a team should do anything and everything to win as much as possible and avoid the pitfalls of losing was prevailing (from my perspective) on this site in the not so distant past. Many told precautionary tales that once a team bottoms out it's easy for them to stay that way for a long time. The culture deteriorates. The fans become apathetic. Losing breeds losing. It becomes a vicious, unavoidable cycle. But now, the Suns have been blown to smithereens and people are pleased as punch. Is it possible many of them have been proselytized into sitting with Linus and me in the pumpkin patch?

Just as tanking is a multifaceted concept, rebuilding is a polysemous word and the process can take many different forms. In fact, what some people call tanking I call rebuilding. I don't see the terms as mutually exclusive.

I have supported this rebuild (that's what I see happening here) since the time I was pining for it long before it commenced. And now, with the reigns of the Suns changing hands from oft-maligned Lance "shooting" Blanks to Ryan McGettingitDonough, it appears that I am in the majority. While the team was rolling out its "Ignite the Future" theme Ryan was busy igniting the fuse to fulminate what was left of "Next Starts Now." All that remains in the wake of this carnage are a scattering of young assets, a slew of first round draft picks and a focus on the future past this season.

The Suns have made it completely transparent where they currently stand in terms of trying to win as many games as possible while transitioning between eras vs. stripping the carcass down to it's skeleton. So how exactly have the Suns went about vindicating team Linus in preparation for the 2013-14 season?

The first, and predominant, domino of the off-season. After the quagmire of the last two seasons, this decision was not only refreshing, but imperative to establishing a clear new direction.

This hiring was universally well received as McDonough was viewed as somewhat of a prodigy and his ambit in his new role has been far reaching. Ryan has been playing a game of speed chess since his introductory news conference in his attempts to reshape the roster in his vision.

The Suns decided to part ways with Alvin Gentry at the midpoint of last season as he was viewed as more of a veteran friendly coach and this team was going in a different direction. The situation was botched, but the reasoning was sound. Enter interim Lindsey Hunter armed with his questionable qualifications draped in ulterior motives. Alas, the affable Hunter and his throwing players under the bus philosophy was ephemeral and his bid to secure the full time coaching gig failed. Gentry was the wrong coach for this team. Hunter was the wrong coach for any team. Hornacek has a chance to be the right guy if he can get the players to adopt his nature.

In lots of cases, a team bad enough to finish with the fourth worst record in the NBA is looking for instant help from their lottery selection. Not so with the Suns. Alex Len appears to be behind 25 year old Miles Plumlee, he of 55 minutes of NBA experience, and may be fighting for playing time with the incomparable Slava at the beginning of the season. These picks are win later moves, as the precocious duo of Len (20) and Goodwin (19) may not crack the top eight in minutes played this season. Although the Suns former incredible vanishing GM deserved his share of derision, he was at in the vicinity of the helm when the Suns traded with the LA Lakers for the draft pick that eventually became Goodwin. But since all accounts report that Sarver himself gave the final blessing on that deal, I'll dole out the credit to him.

A minor move, but a cap space move. Only 200K of Hamed's $1.4 million was guaranteed, netting the Suns $1.2 million. Flexibility moving forward has been of paramount importance under the Suns' new management.

This began the real cataclysm, but this, viewed independently, wasn't necessarily a step back move. It would be easy to argue that this actually improved the Suns immediately since they just added two potential starters at the expense of one. It was also a building block towards the future, as Bledsoe became the team's best young prospect who could be expected to contribute immediately.

Although this was widely viewed as a talent dump for future asset move, it may not be that clear cut. While Scola's presence and production will be hard to duplicate, the incoming tandem have a chance to be rotation players this season. So while this move still apparently makes the Suns worse, it doesn't appear to be a starter for warm bodies swap. Of course the crown jewel is still viewed as the incoming pick, but is it impossible to conceive that Plumlee may end up being better than the player that pick eventually becomes?

This was a talent dump. Butler was incongruous with the team's direction and fostering good will with player relations was a boon in addition to the $5.6 million in cap space this move created. Slava and Ish do seem to fit the description of barely warm bodies, though, so trading a potential starter for them had the effect of making the team instantly worse.

A necessary end to a failed experiment.

More attrition. The Suns traded a quality starting center for the expiring contact of a player with a toe tag. Basically the Suns traded Marcin for the Wizards pick. The Suns were able to get Washington to take back some contracts, though. The deal would have worked financially with less going out from the Suns. More small victories.  Not only do the Suns preserve some cap space after this deal, but (by virtue of Marshall's egress) it appears that Smith will now make the team... keeping alive my hopes of hearing Al McCoy proclaim, "Ish with the swish."

Ultimately the Suns maelstrom of activity has culminated in the exit of three of their top four rotation players from last season for unproven, low ceiling talent and draft picks. The totality of the moves make the Suns worse now while arming the team with assets to become better in the coming years.

Which leaves us with the Phoenix Suns Charlie Brown still trying to finally win kick that damn championship football. 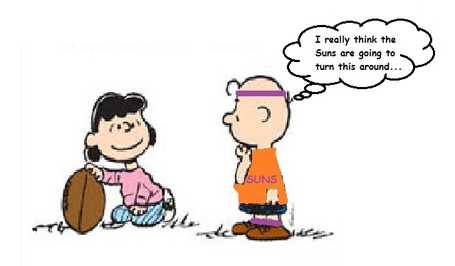 And despite Lucy's uncanny ability to stultify him and stifle his quest, Charlie Brown still hasn't given up.

So maybe the Great Pumpkin analogy is most fitting to the renascent belief that the Suns are back on track under the watch of new GM Ryan McDonough. And as the new season kicks off in just a few days there are a lot more of us out in that pumpkin patch. Considering the paradigm shift from last season's woes to the present day optimism it certainly seems like a Halloween McMiracle.