After a long offseason reserved only for the lower half of the NBA stratosphere, the Phoenix Suns and Portland Trailblazers tip off the 2013-14 season with different hopes and expectations.

The Phoenix Suns tip off the 2013-14 season by hosting the playoff-hopeful Portland Trailblazers at 7pm tonight in US Airways Center. Tonight mark's Channing Frye's return to NBA basketball, and the Suns first foray into a transition year while they develop their youth.

According to national pundits who interview rival GMs, scouts and beat writers on a regular basis, the Phoenix Suns would be happy to see an 0-82 record slapped up on the board over the next five months.

A few national outlets have created a brand new topic to follow all season, and the Suns rank at the top of the list to start the year. ESPN's Suns fan fave Chad Ford has the Suns all alone at the top of the charts in the race for the worst record in the NBA.

Suns GM Ryan McDonough shook things up on Friday in a "tanktastic" blockbuster trade that sent the best player on Phoenix's roster (and one of its few vets), Marcin Gortat, to the Wizards in exchange for Washington's protected first-round pick in 2014 and a guy with a herniated disk in his neck -- Emeka Okafor. The move, in the opinion of a number of GMs I spoke with, catapulted the Suns into the lead for the worst record in the NBA this season.

Coming closer to home, our own SBNation.com has a Tankapalooza ranking as well, placing the Suns in the top tier along with Philadelphia and Orlando.

The Suns may be better off without Michael Beasley, but after last week's trade of Marcin Gortat to the Wizards for indefinitely hurt Emeka Okafor, they're clearly neck-and-neck with the Sixers. Alex Len appears healthy after the preseason, but he's considered a project anyway. Gone is Jared Dudley, and while Bledsoe is talented, there isn't enough on this roster to compete most nights against the Western Conference.

All along, our own Jim Coughenour plans to keep the Bright Side faithful up to date on the Suns tanking status as the season progresses.

The Suns new GM eviscerated a roster that only won 25 games and collected young assets and picks while reconstructing a new roster that will only win slightly less. The Suns are near the bottom of this group in young assets, though, as they are still much closer to the beginning than the end of their rebuild.

Okay we get it. The Suns are tanking. Just don't tell the players on the court.

You won't find a single Suns fan saying they'd buy tickets because the team is so talented and it's fun to see them beat up on the competition.

But you WILL find Suns fans more excited about the prospects of the time than they have been in years. And the ticket sales apparently show it.

While the feds won't release how many people have signed up for insurance since the release of healthcare.gov, the Suns have decided it's time to tout their horns on ticket sales, as Paul Coro of azcentral.com and the Arizona Republic reports this morning.

After selling about 8,500 full season-ticket equivalents (partial-season tickets are combined) last season, the Suns are closing in on 10,000 for this season. That would put the Suns on par with the 2008-09 season, when the club was coming off four consecutive playoff appearances. This team is coming off three consecutive non-playoff years for the first time since 1985-88, but its retention rate has risen by 12 percent.

What's there to see?

If you're reading this article and you don't know anything about the team, then I recommend reading any number of other articles here. On the right-hand sidebar is a long list of season preview articles created just for you over the last few weeks. Read up!

One likely reason for a rise in ticket sales is the promise to emulate run and gun Suns teams of old. No, they aren't trying to recreate 7SOL from the mid-2000s. Rather, these Suns are trying emulate the exciting teams of the late-80s. Not only do the current Suns boast a couple of combo guards in the lineup just like those late-80s teams did, these Suns boast no less than THREE of that team's roster on the new coaching staff.

Jeff Hornacek, Mr. Combo Guard himself who was the only person to make a half-court shot at the last open practice, takes over the reins of the young Suns after a few years as an assistant coach in Utah. To help him, he hired Mark West and Kenny Gattison to the staff - both players on those late-80s teams. West and Gattison work with the bigs while Hornacek works with the guards along with assistant head coach Jerry Sichting, and Mike Longabardi organizes the defense.

Hornacek is sure to get a rude awakening to the tough challenge of winning NBA games when they matter while saddled with a talent-limited roster, but so far he's been the aggressor on the competition. Somehow, the undertalented Suns went 7-1 in the Summer League, and then 5-2 in the preseason.

Not only did the Suns have a 5-2 preseason record, but somehow they had the league's 7th best offense and 6th best defense through 7 preseason games.

You can see the Blazers individual stats here, and the Suns stats here. As mentioned above, the Suns were preseason top-10 in both offense (7th) and defense (6th), while the Blazers were 19th in offense and 5th in defense. 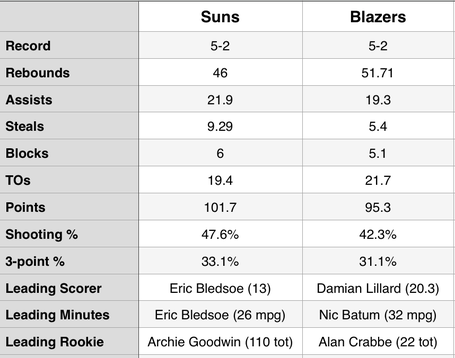 Both teams had a good preseason as they try to establish a winning culture. The Blazers made it their business to play their rotation a lot of preseason minutes to get their chemistry right. Lillard, Frolo and Matthews got lots of burn (25+) along with sixth man Mo Williams. And while Aldridge and Batum sat out three of the games, when they played they got 25+ minutes a night.

The Suns, on the other hand, regularly played 13+ players a night and only Bledsoe played more than 20.7 minutes a night. It was a mix and match affair, made easier last Friday by shipping out four players without returning anyone who is ready to play immediately. That leaves Jeff Hornacek with a likely 11-man rotation (at most) with three guys in reserve in case of foul trouble or injury.

The actual lineups haven't been announced, but this likely what you will see tonight.

The Blazers have the advantage at every single position in the starting lineups, and that's no surprise. The Blazers starters were actually very good last year. It was the bench that did them in, leaving them in late lottery land.

The Suns are missing Markieff Morris, suspended for elbowing another player in preseason last week, so Channing Frye gets the nod at starter despite likely being limited to 20-25 minutes of game action. Expect to see Miles Plumlee slide into the PF spot for size at some point when Channing comes out, with Alex Len taking over the pivot.

Tonight mark's Channing Frye's first regular season game back from missing an entire year due to his enlarged heart. Frye played in six preseason games, and has logged more minutes than he ever imagined he'd be able to log. Now he has to go up against former teammate LaMarcus Aldridge as he continues to get back into shape.

He will likely be very pumped up for this game, so let's hope he doesn't log too many fouls and/or rim-clankers in the first few minutes to mess up the game.

Bring on the FroLo!

On his third team now, Robin Lopez enters the season as the clear #1 option at center for the Blazers. He is backed up by disappointing Joel Freeland and Myers Leonard. Since being beaten out for the center position in Phoenix to since-traded Marcin Gortat, Lopez spent a year in New Orleans impressing them so much they'd rather have a future second-round instead of his reasonable $5 million expiring salary.

Now Lopez comes in with health on his side and a chance to make a difference for a playoff team. Shades of 2010 for him. Let's hope he stay healthy the whole time.

Tonight he matches up with energizer bunny "Frequent Flyer" Miles Plumlee, who logged all of 55 minutes last season in his rookie year. Plumlee is somehow less than a year younger than FroLo, even though FroLo has four more years of experience in the league.

Keys to the game

The key for the Blazers is to beat up on the lesser Western Conference teams, and that certainly includes the Suns. Nobody is going to predict a Suns win, so the Blazers really need to make sure they don't mail this one in by assuming an easy win.

The key for the Suns is to punch hard and fast. Nobody knows what to expect from the Suns, including the Suns themselves. Over the course of the year, they are likely going to be a very poor shooting team that lacks production along the front line, and lacks a star to close out close games. Yet on any given night, the Suns are liable to put it all together to beat anyone thanks to their hustle and hopefully a helter skelter style.

The Suns must get the number of possessions as high as possible, and generate easy buckets through steals and fast breaks. Portland will rebound the heck out of the ball, so the Suns need some back court steals to turn the tide before the ball gets dumped into the paint for Lopez or LMA to finish the possession.

The faster the game, the more likely the Suns will be competitive. And, if Channing Frye and Marcus Morris and Gerald Green can dump some three-balls, the Suns just might surprise the Blazers tonight.