The Phoenix held their annual intrasquad scrimmage in chilly Flagstaff Arizona yesterday in front of more than two thousand fans. Standing out for the Suns were Miles Plumlee and Gerald Green, acquisitions from Indiana for Luis Scola.

Share All sharing options for: Phoenix Suns hold off late rally to beat Suns behind Miles Plumlee and Gerald Green

In a game that wasn't very crisp or particularly competitive, the #newlookSuns showed an eager crowd that there are some standouts on this squad who weren't on the team last season.

"That first five minutes was really hard to get your second wind," new forward/center Miles Plumlee said of the altitude.

Incumbent starters Marcin Gortat and Goran Dragic, at least mentally, took a back seat to the new guys who wanted to make a mark for their new team. Miles Plumlee scored 17 points (8 of them on impressive dunks) and pulled down 9 rebounds, while Gerald Green showed a dead-eye three point shot in making 6-9 from distance for 20 points.

"I just feel like I fit in really well," Plumlee said after the game. "I just gotta be there for the smalls, set screens and rolling. It's pretty easy. I've been looking forward to this as soon as I was traded."

Regarding Gerald Green, Plumlee said "I knew he'd fit in really well with this style of play."

Newcomer Eric Bledsoe looked the part on Saturday, playing point guard for a "black" team that took a big early lead. He scored 13 points (5-10 shooting) with 7 assists, 7 rebounds, 4 steals, 1 block and 5 turnovers while playing almost all 40 minutes of the scrimmage.

But the crowd cheered loudest for Channing Frye, who surprised everyone - including himself and coaches - by playing 24 of the 40 minutes of the scrimmage.

"We went into tonight's scrimmage and he was concerned about it," head coach Jeff Hornacek said of Frye's integration back into live gme play, "We said okay we'll keep you to 2-3 minute stints so you don't get tired and all of a sudden I'm looking up and going 'he's still in the game?' but he said 'I'm good, I'm good'. It was great to see him getting extended minutes in the game."

Frye, who missed all of last year with an enlarged heart, made his first three pointer before the first quarter was over and finished with 11 points and 5 rebounds on the day.

P.J. Tucker was P.J. Tucker, chipping in a strong 12 points, 7 rebounds and 3 assists (with 3 turnovers) in his 27 minutes of play. Shannon Brown was Shannon Brown, occasionally dribbling himself into trouble but making some really nice catch-and-shoot jumpers (11 points on the day). If Brown could transform into a catch-and-shoot guy, he could be deadly on the right team.

The Morris twins had an uneven day. Marcus looked pretty good at his small forward position, posting 13 points (including 2-5 on threes) and 5 rebounds, but brother Markieff looked tentative. As we've come used to seeing, Kieff made some nice moves around the basket only to miss the bunny by trying to make the shot too softly. He finished 2-12 on the day,

Kendall Marshall still shoots from the chest, which makes it too easy for the defense to contest his shot, but looked a lot more chiseled this year than last year. He was quicker, more decisive, yesterday but still doesn't show any domination to his game. He finished with 8 points, 3 assists and 2 rebounds.

Of the guys trying to beat the odds to make the roster, the waterbug Ish Smith darted his way to 5 assists before halftime (6 for the game) but clearly doesn't have an offensive arsenal either from long range, midrange or at the basket. Dionte Christmas went 0-5 while James Nunnally went 1-4 and Slava Kravstov 1-2.

Rookies Archie Goodwin (1-7, 2 points, 2 rebounds) and Alex Len (1-4, 3 points, 6 rebounds) were non-factors, while Marcin Gortat had a nice fourth quarter to put lipstick on the pig that was his first 3 quarters (7 early points on jumpers, 0 points in Q2 and Q3, 0 rebounds). Gortat finished with 10 points and 7 rebounds overall though.

Eric Bledsoe is exactly as advertised, a jack of all trades who looked like the best player on the court. He made some really nice passes to drive and set up Plumlee for thunderous dunks, showing a nice court vision that told everyone he knew what he was doing. He also out jumped players for contested rebounds and made some nice catch-and-shoot threes as his team took a 33-15 lead (or something close to that) in the first quarter.

His running mate Goran Dragic made some nice passes and had a transition layup but otherwise didn't make an impact on the game (sore toe, tired from Eurobasket). The two of them played only 5 minutes together in this setting because they each started at PG for their respective team.

There's no other way to say it than this: Miles Plumlee punked Marcin Gortat in this game. Just like Gortat gets dominated sometimes by bigger, more active centers, he was whitewashed by Plumlee in this game. While Plumlee got 13 impressive points and 8 rebounds in the first three quarters, Gortat was held to 7 points (all on long midrange jumpers) and 0 rebounds. Once, Plumlee rotated on a carom that ended up in Gortat's hands two feet from the basket and stuffed Gortat's little layup attempt right back in his face.

Plumlee was one of the few players who didn't look tired after a week of two-a-days in the high altitude, and his game takes place about a foot higher than Gortat. "Frequent Flyer" Miles regularly plays above the rim - dunks, high rebounds, blocks - while we all know that Gortat prefers to stay closer to the ground.

This doesn't mean that Plumlee is a better player than Gortat. He's not. But at the very worst he appears to be a 7-foot version of Suns fan fave Louis Amundson - always active, beating other players on hustle and pogo sticks for legs, but probably best in a limited role off the bench because his offensive arsenal is limited.

Archie Goodwin was a no-show in this one. His shots came up short and his aggressiveness was totally missing. He looked like a 19-year old out there.

Alex Len is clearly bigger than any other Suns big, and pulled some two-handed rebounds (ahem, Fropez, ahem) away from smaller players by simply getting his arms up there higher than the rest. He's got a nice shot from midrange, but otherwise looked a step slow compared to Plumlee. The 20-year old has some learnin' to do, and he still has to get in game shape.

I had a great time driving up to Flag and back with fellow BSers Sean Sullivan and Jim Coughenour, as well as ESPN's Amin Elhassan. Sean was a gracious host to drive all the way up and back while we all BSed about the Suns for 4 hours, reminiscing about the past 9 years in the valley.

In the end, we all agreed that the Suns are finally heading in the right direction post-Nash, and that the bricks have been laid. Now the hard part comes: getting lucky when the opportunity arises. Luck is a combination of preparation and opportunity. You have to recognize your opportunities when they arise and be prepared to meet them. The Suns weren't prepared for the James Harden situation last time, but maybe they will be ready next time.

The house was more packed than I expected (a few thousand fans) and the Suns looked relaxed and maybe a little surprised by the excitement. They didn't have their game faces on, and it showed in their early play. Coach Hornacek was in a great mood, smiling and cracking jokes much of the game while he let his assistants run the show for their respective teams.

And finally, I took my buds to an old standby from back in the day. An alum of NAU, I have a soft spot for Buster's restraurant right there on Milton (ie. the main drag). And despite looking like it was still stuck in the 80s (I mean seriously, it was the SAME restaurant in 1989), we got some great chicken wings and very hospitable service. Well done, Busters!

Notes from the scrimmage

Sreekar's got a couple of favorite Suns liking their BSotS nicknames! 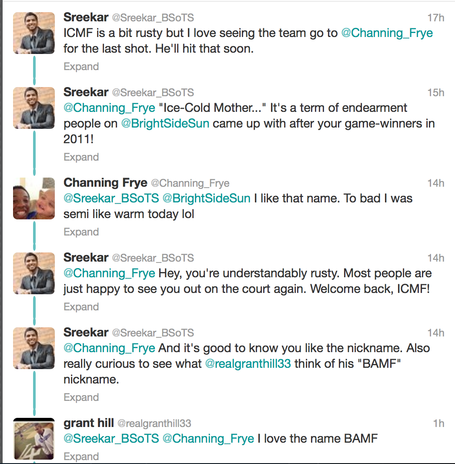