Having problems with premature estimation? Check your sample size. The Phoenix Suns are off to a scintillating start, but what kind of bellwether does seven games provide?

Share All sharing options for: Small sample size can lead to premature estimation

Some of us have done it.  A season starts with fireworks and a person becomes enthralled with the early returns. Optimism and ardor abound.  Then it fizzles out.  Premature estimation.

But it also goes the other way.  Sometimes the early indicators do tell the true story and that passion builds to a rumbling crescendo.

Obviously the latter is preferable.

So, which of these scenarios (completely devoid of innuendo) will the 2013-14 Suns fall into?  Let's look at last season to try to shed some light on the situation... 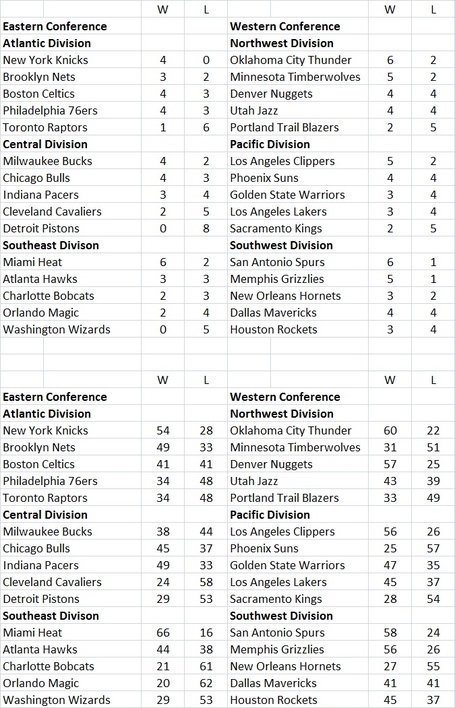 Here are the standings from last year on November 12th and again at the end of the season.  Let's examine some trends.

Of the nine teams that started at least 5-2 (Milwaukee, Brooklyn and New York did end up with this record), seven finished with winning records and eight made the playoffs. Minnesota and Milwaukee brought up the rear.

These trends seem to adumbrate quite auspiciously for continued success for the Suns this season.

Now let's look at the biggest outlier, Minnesota.  An injury riddled season for Kevin Love sullied their season, as he only managed to play (ineffectively) in 18 games.  But he wasn't there for the hot start.  Ricky Rubio also dealt with injuries, but he also missed the beginning of the season.

So who the hell played for them?

Here are the players who logged minutes on opening night.  Nikola Pekovic, Andrei Kirilenko, Brandon Roy, Derrick Williams, Luke Ridnour, Jose Barea, Dante Cunningham, Chase Budinger, Greg Steimsma and Alexey Shved.  Not exactly a murderer's row, but not completely bereft of talent. Roy was starting, but only lasted five games.  Budinger only made it through six. Pekovic missed two games after the 5-2 start (both losses) and 20 games total on the season. Even AK, who started every game he played in, was out for 18.

The Wolves were basically crippled by injuries and didn't even have a chance to build continuity with players popping in and out (or just out) of the rotation.

Milwaukee just didn't turn out to be a very good team.  They didn't suffer any major injuries and even added J.J. Redick and got a contribution from John Henson as the season progressed.

If the Suns are Milwaukee they won't make the playoffs in the Western Conference.  To be Minnesota it would seem like the team would have to suffer catastrophic injuries.

Looking at the opposite end of the spectrum, four teams with losing records after seven games (all 3-4) finished with winning records and made the playoffs.  The Lakers, Warriors, Rockets and Pacers.

But what if we deviate from the lucky (from above) number seven?

First, let me use an example that I haven't seen brought up yet.  The Charlotte Bobcats started last season with a stellar (by their meager standards) record of 7-5.  Then the wheels fell off and they proceeded to lose 18 straight.  How the hell does that even happen?  Charlotte ended up posting a 21-61 record.

Some of you will probably remember the Bobcats third game of the season, a 117-110 loss, against the Suns.  That was the game Shannon Brown drained six three pointers in the fourth quarter, including several that were impossibly difficult, tenaciously defended attempts.  The typically horrible "Cannon" shots that amazingly went in for a change. Dude was unconscious.

The only win that turned out to be signature in nature was against Indiana, but the Pacers staggered out of the gate. Charlotte did beat a couple middling teams such as Dallas and Milwaukee, and had a victory over the Wolves in their seventh game, which put Minnesota at 5-3 and spelled the beginning of the end.

The Bobcats didn't suffer any major injuries.  They just outplayed their talent for a stretch.

Next lets scrutinize the breakdown by the Orlando Magic last season.  Orlando made it to the 25 game mark with a 12-13 record.  In the less than fearsome (after a few teams) Eastern Conference this put them just 1.5 games back from the fifth best record.  They went 3-28 over their next 31 games.  8-49 to finish the season. Their final record was 20-62.

What incited this complete and ignominious failure?  Glen Davis was actually injured right at the 25 game point and missed most of the rest of the season.  Arron Afflalo and Jameer Nelson both missed some time, but both played through the vast majority of the monumental collapse stage.  Is Davis really worth 20 wins a season all by himself? Or even a couple for that matter?

It seems to me that the losses just piled up a little bit and then things snowballed as the team became demoralized. There was no coaching change or loss of the magnitude of an all-star caliber player.

While these are cautionary tales of becoming fully invested in early returns, the Suns have even more evidence that supports continued good play (although not quite at their current pace).  The team has had meaningful contributions from many different players already sporting individual or multiple games that are close to, or even exceed, career bests.  The team even played through an injury to Goran Dragic without obvious impairment, which supports a train of thought that an injury to a single player, with the probable exception of Eric Bledsoe, may not be debilitating.

At the same time, there are still questions about the sustainability of this level of play, since Bledsoe, Plumlee, Markieff, Marcus and Green are all basically on pace for career years.  It is reasonable to expect at least some fall off from the group as a whole, but to what degree?

Other teams who were slated to be buried underneath the floor of the basement have at least temporarily exhumed themselves in the early going. The Philadelphia 76ers started 4-2, with signature wins over Miami and Chicago, before losing two straight.  Their early schedule has also included Golden St. and San Antonio.  The Boston Celtics, who have also beaten Miami, have won four straight after an 0-4 start... without all-star point guard Rajon Rondo.

The Suns best wins this season are over the Portland Trail Blazers (currently 5-2) on opening night at home and at the New Orleans Pelicans (3-4, but 3-2 against teams not named Phoenix).  The game against the Blazers in Portland tomorrow may be a good barometer of the two teams development since that game.  Other than that they've beaten some bad teams at home (Denver 2-4 and Jazz 0-8) while losing to some really good teams (OKC 5-1 and SA 7-1) on the road.  I think the nature of the road losses makes this complete body of work somewhat impressive, though.

The team's upcoming schedule may leave us wondering for a bit, too, as they play Sacramento (twice), Utah (twice), Charlotte and Orlando in their next 10 games.  It may well be that we still aren't sure a quarter of the way into the season...

And this shouldn't necessarily be a surprise... remember 2009-10?  The Suns started 14-3 (great!) before struggling through a 12-18 stretch (terrible!) and finishing strong by going 28-7 (wow!).  The Suns were basically three teams that season, and that was a damn entertaining season.  Hopefully this one can be closer to that than the last three...

I guess we'll have to wait and see.