The Phoenix Suns fell to 5-3 on the Season after falling to the Portland Trail Blazers in a game that went right down to the final second.

The Phoenix Suns went to Portland and came up just one point shy, losing 90-89 in a game that went down to the very last second.

The Suns played terrific defense all night, locking down Portland point guard Damian Lillard for 47 minutes and 45 seconds. However, he broke free in the final 15 seconds to score the game-winning layup for the Blazers on a complete defensive breakdown by the Suns. Lillard and LaMarcus Aldridge combined for just 23 points on 32 shots, but it wasn't enough for the Suns to get the win. Eric Bledsoe had a phenomenal first three quarters before struggling in the fourth. Oh, and Goran Dragic had to exit early again with another injury.

The first quarter set the tone for the rest of the game as the two teams traded blows and neither was able to oull away.

Goran Dragic was active early but picked up two early fouls and had to take a seat. Fortunately for the Suns, however, LaMarcus Aldridge followed him to the bench in foul trouble shortly after.

The two teams traded, in Eddie Johnson’s words, "boneheaded" plays late in the quarter. Marcus Morris fouled Thomas Robinson 30 feet from the basket on a desperation heave with the shot clock about to expire. Then the Blazers returned the favor by fouling Eric Bledsoe on his own 3-point attempt with less than one second left on the clock. Robinson made one of his attempts while Bledsoe made all three, so I guess advantage Suns.

When the dust settled, the Blazers were ahead 25-22.

Aldridge and Dragic returned to the court to start the second quarter, and the two teams went back and forth early on, with each squad hitting a two and a three to up the score to 30-27. The two teams also traded a series of missed layups as the rims were not kind in Portland. The Morris to Morris three-quarter court connection resulted in a layup that actually stayed in and brought the Suns within one at 34-33 halfway through the quarter.

The Suns took the lead on a fastbreak layup by Dragic that was created by terrific defense, particularly by Markieff Morris on Aldridge. Robin Lopez answered with a hook shot but a fastbreak dunk by Archie Goodwin and a pair of free throws by Dragic put the Suns ahead 39-36. The teams continued to trade points. LaMarcus Aldridge scored his first points of the game with 25 seconds left in the half after being locked down in the first 23:35 by Markieff Morris and Channing Frye.

Phoenix took a 43-41 lead into halftime. As the low score indicates, it was an ugly half with each team shooting 39 percent from the field (including all the layups that rimmed out). The fact that Robin Lopez had 10 boards in the half tells you how many bricks were thrown up.

The Suns held the duo of Damian Lillard and Aldridge to just seven points on 3-14 shooting combined. Goran Dragic struggled in his return to the starting lineup, shooting just 2-7 for six points. Eric Bledsoe, however, had a big half with 11 points and was the only one in the game to reach double figures in the first half.

The shooting woes for both teams continued into the third quarter, and the Suns managed to hang on to their lead throughout the quarter. Portland pulled within two at 58-56 with just over two minutes left in the half, but Phoenix exploded for a 10-3 run to expand the lead to 9. Unfortunately, Mo Williams banked in a 3-pointer at the buzzer to cut the lead to 68-62 at the end of the third quarter.

Bledsoe continued to roll for the Suns, scoring 10 in the period to push his total to 21.

Portland scored the first five points of the final period, but Phoenix responded with a 6-2 run as Dragic hit two 3-pointers. A nasty collision between Williams and Dragic resulted in both guys going down, but the Suns continued to play and Gerald Green drilled a 3-pointer. Unfortunately for the Suns, Dragic had to be taken back to the locker room to get stitches. Dragic would not return to the game.

Following Dragic’s departure, the Blazers went on a 9-0 run to take a 78-77 lead with just under seven minutes remaining. Neither team was able to get a stop as the two teams traded buckets for the next couple minutes until Thomas Robinson was fouled and missed both free throws. Phoenix scored and came right back to fouling Robinson, this time intentionally, and he split a pair.

Bledsoe took it straight to the rack and finished for the Suns (unfortunately, his only points of the quarter), but Wesley Matthews responded with a tough step-back 3-pointer. An offensive foul by Tucker gave the ball back to Portland and they capitalized to take an 88-87 lead.

Bledsoe pulled up for a jumper and missed, but Plumlee managed to get a hand on it and tapped it back to a teammate. Following a timeout, Bledsoe found Plumlee rolling to the basket for a layup to put the Suns back up by one. On the other end, the Suns got the stop they needed as Aldridge missed a turnaround jumper over Mook Morris.

Eric Bledsoe looked to expand the Suns' one-point lead with a strong drive to the rack, but he couldn't finish at the rim and the Blazers secured the rebound with 11.3 seconds left.

Needing a bucket, the Blazers run a high pick-and-roll, which the Suns decide not to defend (Bledsoe got picked off, Frye stuck with the screener, and nobody else helped). Lillard virtually strolled to the rim for a layup with 6.5 seconds left. 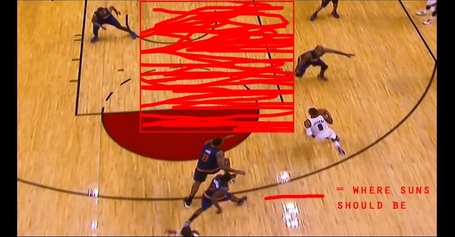 Trailing by one, the Suns had one more chance. Once again, Bledsoe got all the way to the basket ... and once again, he wasn't able to finish. P.J Tucker and Markieff Morris both had a chance at tip-ins but neither one fell and the clock ran out. 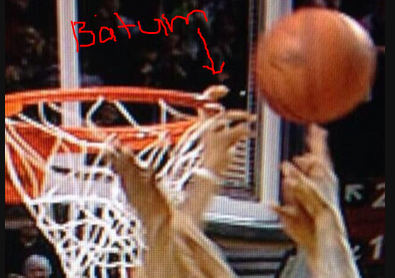 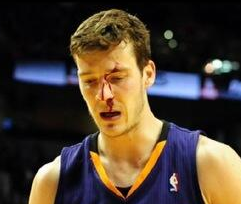