Share All sharing options for: Solar Flares: Phoenix Suns News from Weeks 2-3 of the 2013-14 NBA Season

The Phoenix Suns are now 5-3 after a tough, heartbreaking loss against the Portland Trail Blazers last night. On the bright side (because that's how we roll around here), there were plenty of positives to take away from that game - Eric Bledsoe's continued brilliance, Plumlee's play, the consistent defensive effort of the entire team, etc.

The Suns will next play the struggling Brooklyn Nets on Friday night in Phoenix. The Nets, at 2-5, have begun the season in poor fashion and many of their fans are already in panic mode. This should be a fantastic matchup of an old yet talented team of All-Stars playing lethargically and underperforming versus a young, overachieving roster of athletic players.

Anyway, let's take a look at some random Suns-related content that floated around various parts of the internet this last week.

They're in every game. They never give up. They have so many weapons. They stay calm when things go badly. None of these things are things I expected to say about this team this season.

The Suns continue to defy expectations, winning three of their last four games despite the absence of starting point guard Goran Dragic. Eric Bledsoe is playing like a mini-Russell Westbrook, averaging 20.9 points, 7.3 assists, 4.3 rebounds and 1.9 steals. It doesn't hurt that Markieff Morris has been on fire, averaging 24.7 points off the bench in the last three games.

With a 4-0 start at home and a 2-0 mark against the playoff-chasing Pelicans, Phoenix is threatening to surpass Philly for No. 1 in November's Cinderella rankings. More important: Jeff Hornacek already gives you the impression that he can get his players to buy in. Which is huge if it lasts.

The fast start is in part due to Eric Bledsoe, but also Jeff Hornacek has them playing the seventh best defense in the NBA (based on points per possession). It's early, we'll see what kind of level they can sustain, still this is a good sign for trying to build a foundation going forward. 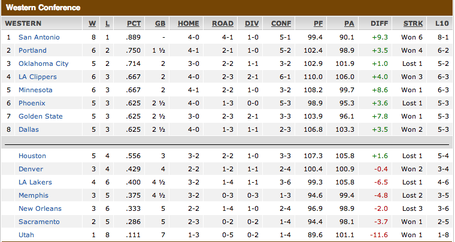 See you in the postseason, OKC!

If there's one link you click on this week to read something about the Suns not on Bright Side of the Sun, make sure it's this phenomenal profile on Bledsoe's play thus far into the season by Jack Winter of Hardwood Paroxysm. It's fantastic and you won't regret it.

Kieff's put-back dunk on Mozgov after a missed free throw:

Goran Dragic dominated the Twitter headlines for the Suns this week, first with the birth of his son Mateo (Baby Dragon!) and then with the nasty cut he received on his face against Portland:

I would like to thank everyone for sending their best wishes. It is the best feeling in the world! #maliJunak

Just wanted to take time out to say congratulations to a great teammate @Goran_Dragic on his new born son!!

Congratulations to @Goran_Dragic and his wife on their new baby boy!

RT @suns_jfie: Goran Dragic has just gotten off of the doctors table, 13 stitches to close gash on side of nose (NASH WOULD BE PROUD)

I be back next game!!! Nasty cut pic.twitter.com/sMbzcGqOHr

Goran Dragic gives his son the same name as Steve Nash's son, gets a vintage Nash injury the next day. COINCIDENCE? pic.twitter.com/mRGFJG2Pye

I had to make a new category just to post the gem of a tweet Matt Barnes shared with the world last night after he (shocker) was ejected for his role in instigating a ruckus against the Thunder. Barnes then tweeted the following (while the game was still being played) but deleted it after a while. For some reason, athletes tend to forget that the internet always remembers what you share: 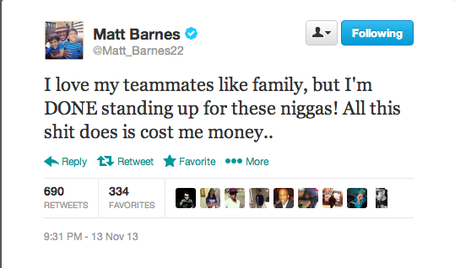 The second Bright Sider of the Week award in the history of awards goes to (drumroll please).....Andy Buckdawg for his awesome "Comedy Screencaps" fanpost. If you haven't seen it yet, go check it out. Andy, you can collect your award when you post your next issue of comedy screencaps. Congrats!