The circus is coming to town, and the Phoenix Suns are ready for it. As has long been the case in the NBA, a veteran team's kryptonite is a brash, young opponent early in the NBA season. Enter the Phoenix Suns.

For the past several years, the Phoenix Suns have been the team dreading that game on the schedule featuring a young, upstart team who could run the aging Suns off the court on any given night. Finally, the Suns are that team and the Brooklyn Nets are that aging unit wishing they could just fast-forward to Saturday.

The Brooklyn Nets starting unit is "swoll" with All-Stars at nearly every position: each of PG Deron Williams, SG Joe Johnson, SF Paul Pierce, PF Kevin Garnett and C Brook Lopez have all made at least one All-Star game. Compare that to the Suns starting lineup boasting 0 All-Star games and you'd think the Suns would be easily eclipsed tonight.

Yet the Nets have started the season 2-5 with no signs of a turnaround yet. Their offense is horrendous, ranked 26th in points-per-100-possessions while their defense is middle of the pack (14th).

The Nets are 0-4 so far on the road, with losses to Cleveland, Orlando, Washington and Sacramento who are collectively 7-22 against the rest of the league. Worse than that, the Nets are losing to those losers by an average of 106-93.

Only Brook Lopez is playing well among their starters, putting up nearly 20 points and 7 rebounds a game at the center position.

Still, these guys are All-Stars and the Nets can wake up at any moment. Let's hope it's not tonight.

For an inside scoop on the Nets, be sure to check out my Q and A with Nets Daily's Dennis Velasco on the state of the Nets.

We all know about the Suns, but did you know the Suns are now up to 4th in defensive efficiency after the Portland game while their offense has dropped to 19th overall. Frankly, when the Suns aren't fast-breaking, they're not making enough shots in the half-court sets. The Suns need to run to succeed. If the Nets can slow down the game, the Suns will be in trouble.

Goran Dragic most likely returns to the lineup, hopefully to finish the game this time. Dragic has only finished 3 of 8 games so far this season, missing two games entirely due to ankle injury and leaving three others (ankle, bleeding gash) before they finished. Let's hope new daddy Dragic can see out of both eyes on Friday night. 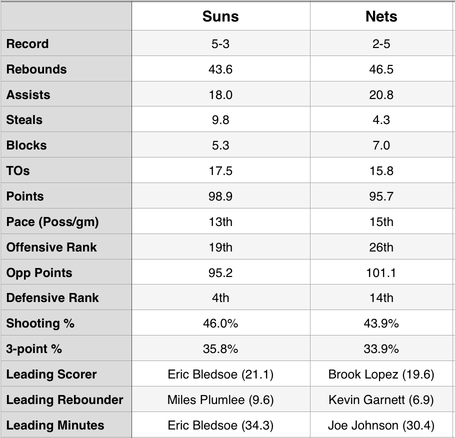 The Suns get a lot more steals and play much better on the defensive end. And, while the Suns are struggling on offense they seem to be a lot better than the Nets there too. The Nets rebound the ball well, and get to the free throw line for easy hoops.

All-Stars up and down the line for the Nets. At least two Hall of Famers. Yet only one of them is still on his way up (Brook Lopez) while the others are either clinging to the top or have already slipped down the back side.

The key matchup is the face-off of big PG Deron Williams against the speedy Eric Bledsoe. Williams has the ability to get hot and pour in 30+ points in a game on a ton of 3s and array of midrange shots and layups. He is (was) the complete package. Bledsoe may be able to take Williams out of his rhythm simply by playing at top speed. Let's hope it goes that way.

Brooklyn is 0-4 on the road, losing by an average of almost 13 points.

Phoenix is 4-0 at home, winning by and average of almost 9 points.

The law of averages state that teams regress to the mean. Let's just hope that's not tonight. The Nets have shown no inclination to win on the road yet, and Phoenix is the toughest team they've faced. Their previous road opponents are a combined 7-22 in other games.

For more coverage, check out NetsDaily