After the four-player trade that sent Marcin Gortat and others to Washington, the Phoenix Suns have even more room in the summer of 2014 for free agent signings.

After finishing an abysmal 25-57 season with a middle-aged club, the Phoenix Suns entered the summer of 2013 with 10 players under guaranteed contract for the next season and only about $7 million in cap room to add free agents.

Seven million dollars does nothing to improve a 25-57 team, so the new GM set about to make wholesale changes.

"The talent needs to be upgraded across the board," General Manager Ryan McDonough said in his opening media conference in May after being hired.

Six of those incumbent players were traded or released. Ten players and two future first-round draft picks have been added to those returning four, including P.J. Tucker whose 2013-14 option was later guaranteed.

McDonough made four trades, drafted two rookies (three, technically, but only two are in the NBA) and signed one free agent (Dionte Christmas).

In the end, the Suns enter the 2013-14 season with 14 players (plus 6 upcoming first rounders in the next two years) and only sacrificed about $1.5 million in cap room.

The cap room during this season can be used to absorb the contract of another player(s) whose team is underachieving and want to rid themselves of salary (for the price of more assets, of course) by the Trading Deadline in February.

Flexibility is king, and the Suns have it. Only Philadelphia has more available cap space for contract absorption this year.

But what about next year?

Well, in the purest sense, the Suns could have as much as $28 million dollars in cap space to spend in free agency. That's a lot a chedda - but the Suns would only have 8 players under contract, and each team can have a minimum of 13.

Yet it's not that easy. To get the $28 million in spending money, the Suns would have to renounce their rights to six free agents, though only two of them are in the regular rotation so far this season: Eric Bledsoe and P.J. Tucker.

But it's very unlikely the Suns would just renounce their Bird Rights on Bledsoe and Tucker, so each will have a cap hold associated with them all offseason until they sign with the Suns or another team.

In addition, the Suns will be charged with cap holds for their four first round draft picks (guesses on their draft position are pure speculation at this time, but they cannot be ignored when considering cap space).

This means that on July 1, 2014, when it comes time to sign free agents, the Suns will likely only have about $11.56 million to spend. Cap holds are charged to teams so that they don't cheat the system and arrange to exceed the cap before re-signing their own free agents.

However, I have some very good news for Suns fans. The more you understand about cap holds, the more you will see the genius behind waiting to re-sign Eric Bledsoe until after next summer's feeding frenzy.

Bledsoe's "cap hold" while he is a restricted free agent is only $6.57 million. No matter how big the offer he gets, the Suns only have to keep $6.57 million in cap room available to match any offer from another team.

"From the Suns' perspective," Suns President Lon Babby said to Paul Coro of azcentral.com last week regarding not extending Bledsoe just yet, "It needs to be considered from the context that Eric will be a restricted free agent in the summer, which gives us matching rights. In the end, it seemed prudent to wait until July. In the meantime, we will be rooting for Eric to have a great season."

Babby later confirmed to me that "We can match an offer sheet with Bird rights. Salary in offer sheet is included in team salary once team gives right of first refusal exercise notice."

So not only do the Suns have the right to match any offer, they don't even have to have all the cap space to do it (just the cap hold), while the signing team needs every penny of the offered salary. The Suns can use their Bird Rights on Bledsoe to exceed the cap to re-sign him (for anything bigger than his cap hold).

Now you can see more reason why the Suns waited and why Bledsoe waited as well. Bledsoe will still get every penny, and then some, without strapping the Suns cap future yet. In the two weeks or so it takes to match a Bledsoe offer next July, the Suns will have $4-7 million more dollars to spend in free agency (the difference between his cap hold and the likely offer amount).

And by just doing a little more creative finagling to reduce cap number even further, the Suns could offer a mini-max contract to a free agent small forward or power forward (whichever hole remains after the draft) to pair with a re-signed Eric Bledsoe and the returning young core.

Imagine this current Suns team with a top-5 pick AND a top free agent next summer to fill the forward spots around Len/Plumlee and Dragic/Bledsoe/Goodwin. The best free agents will be restricted (like Bledsoe, 2010 draftees) who were not extended this fall, two of whom are named Gordon Hayward and Greg Monroe.

Even if the Suns don't want to spend all that money next summer, depending on trades between now and then, why tie up the money when you don't have to do it? Better to stay flexible as long as possible.

In the end, the Suns are in better shape than you might have thought next summer.

Whoops, I forgot about the stretch on Beasley's $2.3 million remaining, which adds another $1.6 in cap space starting next summer. By waiving Beasley, any future years are stretched by twice the remaining years plus one (ie. stretches 1 year into 3 years, in Beasley's case). 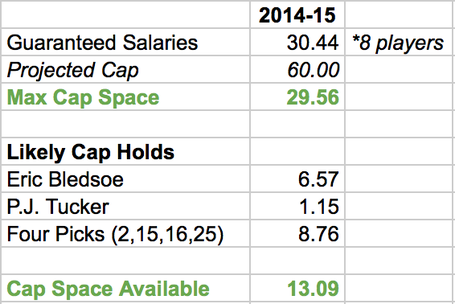 So, the numbers are even better than I thought. The Suns just need to make another minor trade OR renounce P.J. Tucker in order to have enough space to sign a mini-max next summer before matching on Bledsoe, IF that's that they want to do.

Renouncing P.J. Tucker doesn't preclude the Suns from re-signing him. It just doesn't give them the Bird Rights to do it - ie. exceeding the cap to bring him back to whatever contract he deserves. All that depends on Tucker's play this season, and the draft picks, and etc. etc.