After losing in the final seconds -- for the third time in a row -- the Phoenix Suns try to get revenge less than 24 hours against the Kings as part of a home-and-home series against their Pacific Division foe.

Share All sharing options for: Game Preview: Groundhog Day - Phoenix Suns vs. Sacramento Kings, this time in the desert

The Suns and Kings are in the middle of a home-and-home against each other. The Suns couldn't hold a solid second-half lead against a bad team, allowing the Kings to tie the game at 95-95 with 6 minutes to play and folding for a 10-0 Kings run to end the game.

The Suns now are on a three-game losing streak, with back-to-back-to-back last second losses by a total of 6 points.

The Kings have been bad this year. Eight of their first ten games at home, yet only going 3-7 with one of the worst defenses in the league and a barely better offense.

Yet they beat the Suns once again. The Suns have been bad against the Kings the last few years, especially in Sacramento.

DeMarcus Cousins has eaten the Suns centers for lunch. Cousins went off for 19 first-half points, despite the Suns taking an 8-point lead into halftime, before hurting his shoulder and becoming an afterthought in the second half until he was a difference-maker at the end of the 4th in the 10-0 run with steals, rebounds and scores.

The Suns still can't consistently get Bledsoe and Dragic on the court together. Last night, it was Bledsoe's turn to miss the game and Dragic struggled to run the team at the end of the game when it got tight.

Archie Goodwin showed flashes of his summer league self in that second quarter last night - scoring 12 points on 5-7 shooting and making a 3-ball, but also creating three of those shots thanks to his defense with breakaway steals in the second quarter.

In fact, the entire team got hot for a while there during a 19-2 team run that included several threes in a row, including one from 19-year old Goodwin.

Marcus Morris was hot as well, making his first five jumpers and drawing shooting fouls to the tune of 14 first-half points, and 19 for the game overall.

And then there was Gerald Green with his season high

In the "bad" column, we got downside of the big yoyo called Markieff Morris. After being the best player in the WC for a week, he's been really bad for the past week. I mean, really bad. Last night: 3 points, 0 rebounds. 5 personal fouls in 10 minutes of play. Take a seat, young man.

And then there's Goran Dragic, who had almost as many turnovers (7) as assists (8) on the night. 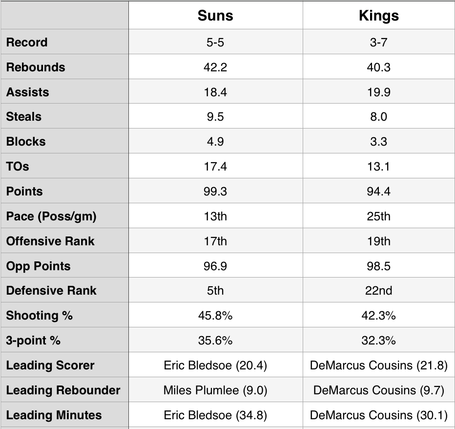 The Suns are supposedly a much better defensive team than the Kings, and even a little better on offense. A check through the stats shows you why.

It's probably going to be a game-time decision on whether leading scorer Eric Bledsoe will play in Phoenix after missing last night's game due to a shin bruise. If he sits, Gerald Green slides into the starting lineup at SG while Dragic becomes the full-time PG.

Any matchup against DeMarcus Cousins is a tough matchup, but the Suns have no success no matter who defends the guy. Cousins is just a beast. So it's not really a key matchup.

Let's say the real matchup is the rookie shooting guards, Archie Goodwin vs. Ben McLemore. It's not that they play against each other necessarily, as McLemore starts while Goodwin sometimes doesn't get big minutes off the bench. But Suns fans will remember that McLemore was at one point considered the #1 prospect in college last season and he was available when the Suns picked at #5. The Suns passed on Ben in order to take Alex Len, and then they drafted Archie Goodwin at #29.

Last night, Goodwin had his best game of the year with 16 points on 7-10 shooting with 2 assists and 2 steals in 19 minutes of play - all career highs (in a 10-game rookie career). Six of his points were on breakaways off a Kings turnover - two of them created by Goodwin himself. Goodwin was very good last night.

McLemore has had a lot more opportunity to play, playing in all 10 games for the Kings and starting four of them so far. Ben has had four games of 10+ points with 6 games at less than 10. When he's good, he's good. But just like any rookie, he disappears as well. He's making 36% of his threes, but just 38% overall.

Suns win at home. For the good of their psyche.

The Suns are the only NBA team to lead in every fourth quarter, yet they are tied at 5-5. Does that mean that close games - those that come down to the wire - often have random outcomes that eventually even out?

If so, then the ball is likely to start bouncing the Suns' way again soon.