The Suns looked to be in control late in Sacramento against the Kings, holding a 104-97 lead with only three minutes left. So how the heck did they lose? Let's find out.

Ed. Note: We know the Suns already played a second game against Sac, but the real breakdown was in Cali on Tuesday night after holding a late lead. Let's focus on that for a moment here.

At the 3:35 mark of Tuesday's game against the Sacramento Kings, Suns fans had to be feeling good. Gerald Green had just drilled a 3-pointer to put the Suns up 104-97 and it looked like Phoenix was in control.

Unfortunately, what followed was a complete and total disaster, as the Suns did not score a single point in the last three minutes and change. Not one. The Kings by no means played well down the stretch either, and gave the Suns every opportunity to win this game, but in the end the Kings hit shots and the Suns didn't. Your final score was 107-104.

Let's take a closer look at what exactly went wrong.

First of all, following Green's 3-pointer, Kings point guard Isaiah Thomas (more on him later) took it the the rack and drew a foul. He hit both free throws and cut the lead to 104-99 with just under three minutes remaining.

The ensuing Suns possession was a bit of a mess. Isaiah Thomas didn't even let Goran Dragic get over halfcourt before he started pressuring him. 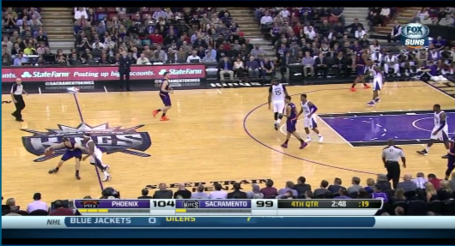 Thomas is 5-foot-9 and is a very good athlete, and he was able to get up under the bigger Dragic and bother him. This is something that you'll see a lot in the next several screen caps.

Phoenix tries to run the pick-and-roll with Miles Plumlee a couple times, but Thomas goes under the screen and Dragic doesn't do anything with the ball. 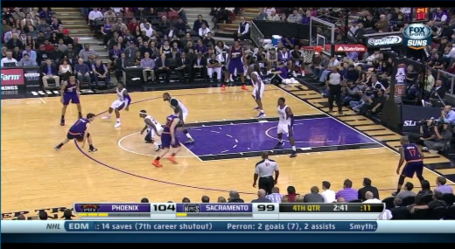 With Dragic still holding the ball at the top of the key, Thomas steps out and gets in his face again. Plumlee comes up to set the screen again... 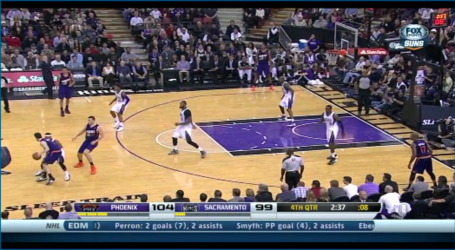 And this time he makes solid contact and springs Dragic. 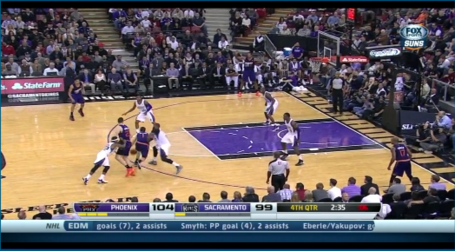 Dragic came off the screen with Thomas trailing him, but DeMarcus Cousins is in help position. Instead of driving right where he had more room to work with, Dragic went back to his dominant left hand and had the ball knocked free by Cousins. 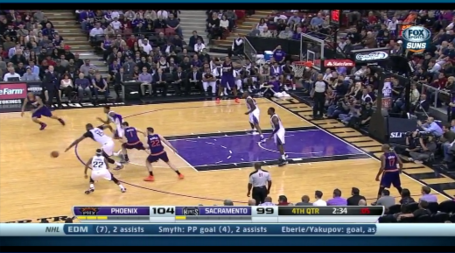 Turnover. The ball never left Dragic's hands and Plumlee was the only other player that even moved. That's not what you want to see on offense.

The Kings didn't score on that break as Gerald Green hustled back and knocked the ball out of bounds, but they still scored on the possession as Cousins bullied Plumlee in the post for an and-one finish (Plumlee on Cousins is not a good match-up for the Suns).

The Suns' next play shows how much the Suns missed Eric Bledsoe, who sat out the game with a bruised shin. Why you ask? Well, because Ishmael Smith was in the game in crunch time.

Smith brought the ball up but quickly got it into the hands of Dragic. Notice that Thomas is right in his face again. 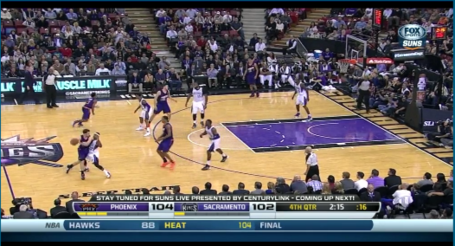 Thomas backs off as Channing Frye comes up to set a ball screen. 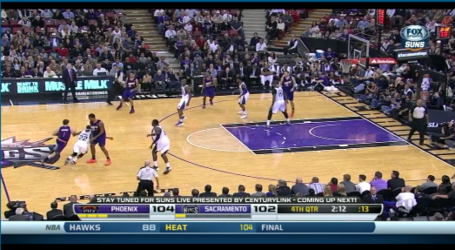 So far away from the basket, and with Thomas dropping back, Frye wasn't able to get a solid screen set and Thomas got around it. Dragic drove hard anyway, though. 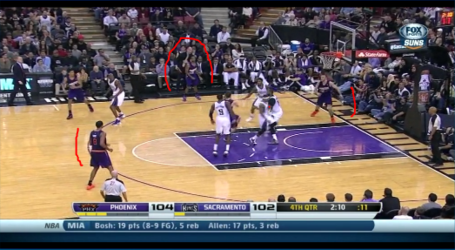 Dragic actually had a couple options as he collapsed the defense with his penetration. Frye is near the top of the key and Plumlee is under the basket. But Dragic chose to make the most simple and probably the correct pass by kicking it out to the corner. Unfortunately, Smith was the guy standing there. He was wide open and Dragic hit him with a good pass, but he missed anyway. However, a long shot means a long rebound often enough. 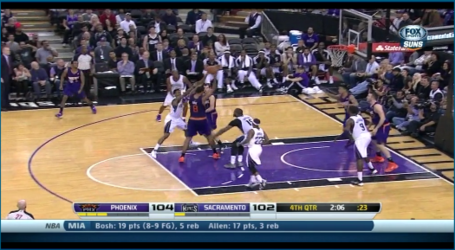 Frye had the ball bounce off hard and go right to him for the offensive board and a new shot clock. However, instead of kicking it back out, he tries to go up with it himself. 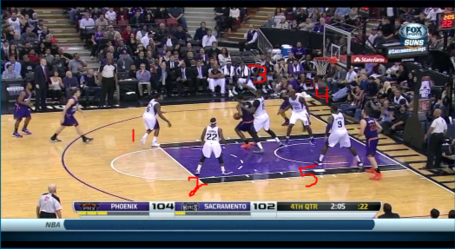 If you look at the screen cap above, you'll notice that I counted how many defenders had at least a foot in the paint around Frye: all five of them, including Cousins who is right on him. Frye tries to shoot over Cousins and has it blocked. Kings ball, under two minutes to go.

The Suns caught a break, however, as Isaiah Thomas picks up his dribble 30 feet from the basket and has his pass deflected and stolen by Smith.

The game started to look more like hot potato than basketball as the Suns gave it right back on the next possession. After Dragic drew a blocking foul on Thomas off the ball, the Suns came back and tried to run a pick-and-roll with Plumlee. Plumlee rolls but doesn't get the ball and then never leaves the paint, resulting in a three second violation. Kings' ball again.

The Suns get the ball back yet again when Cousins throws Plumlee out of his way and is called for an offensive foul.

Phoenix runs a standard play, with Dragic passing off to the wing and down screening for Marcus Morris. Mook pops to the top of the key, gets the ball, doesn't have a look and passes off to the other wing. 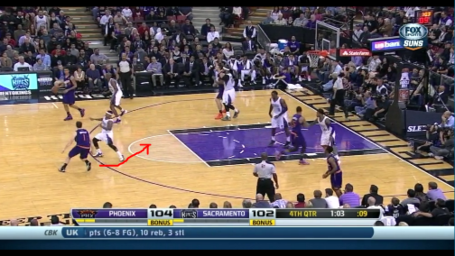 Morris clears out and Dragic runs up to take his place, only Dragic plants and back-cuts on Thomas. 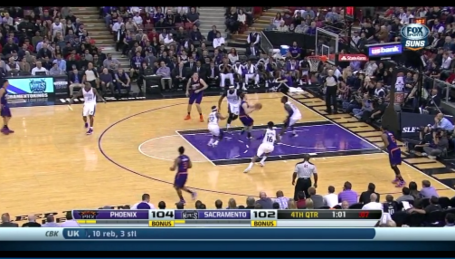 Green hits him with the pass and Dragic elevates off of the catch. Unfortunately, Patrick Patterson is in good help position for the Kings and McLemore, Cousins and Thomas all collapse on him as well. 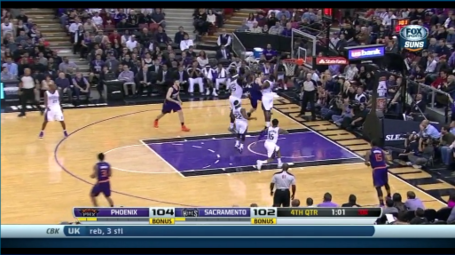 Dragic gets himself stuck in the air and attempts to find Morris in the corner with a wrap-around pass ... that unfortunately ends up in the second row. This was a good play by Phoenix but even better defense by Sacramento. Dragic's mistake was deciding to go all the way before he even caught the ball.

The Kings finally make Phoenix pay for the turnovers on the next play, as Travis Outlaw connects and ties the game at 104-104 with 40 seconds left.

On the next play, the ball is in Smith's hands for whatever reason, and he loses his dribble then complicates the mistake by fouling Thomas, who picked up the loose ball. two free throws later and the Suns are down 106-104 with 30 seconds left. Miss you Eric.

The Suns come right back with yet another Dragic Plumlee pick-and-roll. Thomas' pressure defense disrupts the Suns again, but they're finally able to get a good pick-and-roll set up. 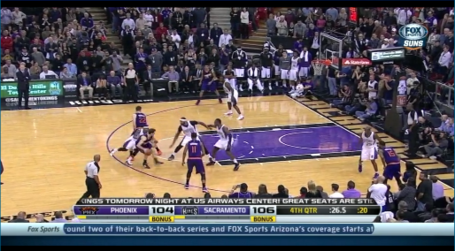 Thomas goes over while Cousins steps up to trap Dragic. Dragic spins back to his left, looking to make a pass. 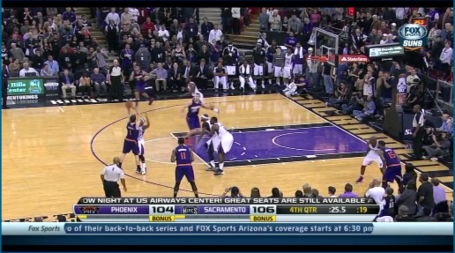 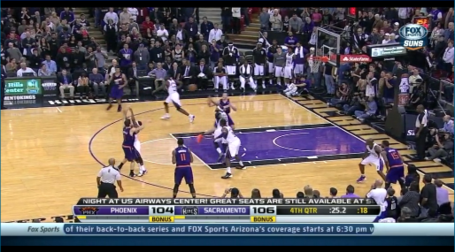 Plumlee was open on the role, but Dragic's pivot gave Cousins enough time to drop back down and snatch the pass out of the air. Had Dragic been able to make the pass without the backwards pivot or had he lobbed it towards the basket, Plumlee probably scores. Instead, he uses a bullet pass and the Kings are off to the races.

The Suns catch another break, though, as Cousins races off by himself and dribbles right into a Phoenix trap for a turnover. The Suns have a shot for the tie.

Dragic gets the ball and Markieff Morris sets a screen. Dragic is aggressive off the screen and forces Travis Outlaw to switch onto him. Dragic looks to have half a step on Outlaw ... 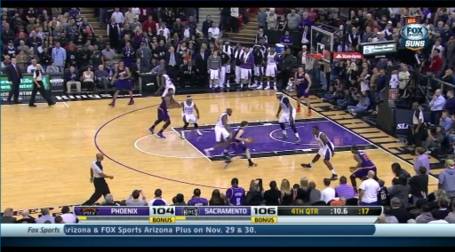 But Cousins is waiting for him at the rim. 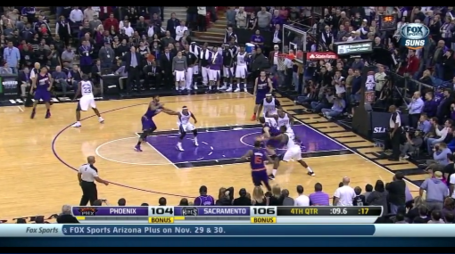 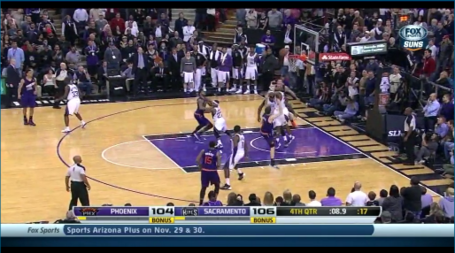 Dragic stops, pivots back and puts up a tough fadeaway that doesn't go. He really didn't have many option on this play as Sacramento played pretty good defense and all the other Suns stood and watched.

The Suns get one more chance though as the rebound goes out of bounds off the Kings with 5.9 left on the clock.

Jeff Horncek draws up an interesting play. He has Dragic and Plumlee around halfcourt, while Green and Keef Morris set up on the low block. Mook Morris takes it out. 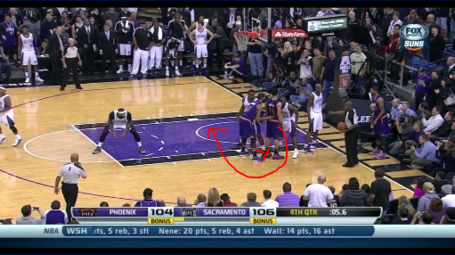 Keef sets a screen for Green, who cuts across the paint. 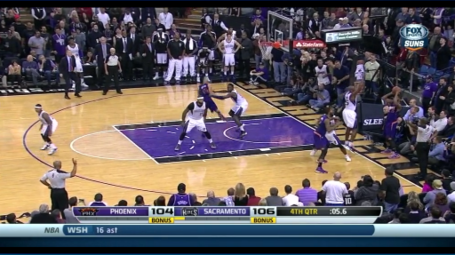 Keef seals his man and Mook tosses it over the top to him, then runs on the court and takes a hand-off from his twin. 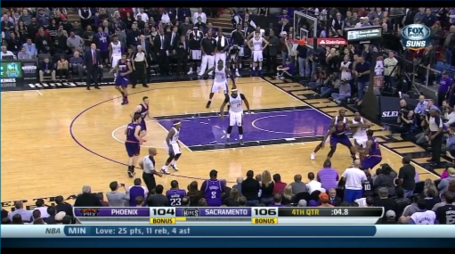 Mook is wide open in the corner when he takes the hand-off, but for whatever reason hesitates and pump-fakes, giving his defender time to get around Keef, and THEN he fires. Brick.

Hornacek actually drew up a play that worked. Mook just choked. Had he fired right away it would have been an open look. Heck, he had time and space to dribble to his left for a closer shot or a drive. But instead he froze.

The Suns had one last chance after Cousins splits a pair of free throws to put his team up 107-104, but Green's shot from beyond halfcourt bounces harmlessly off the backboard.

The Suns really missed Eric Bledsoe in this game. Smith never would have seen the court had Bledsoe been healthy, and Dragic might not have felt he had to press so much had he had his backcourt partner out there with him.

The Suns played horribly down the stretch, but the Kings deserve credit as well. The Kings big men were in good help position on almost every play and Isaiah Thomas' pressure defense on Goran Dragic, the Suns' only real ball-handler, really disrupted Phoenix's offense.

Bottom line: the Suns need a healthy DragonBlade if they are going to win. Having only one of those guys on the court just isn't enough.