Whether he is starting, coming off the bench, creating posters, or draining threes... The Phoenix Suns found a utility player in an unlikely form this year.

Share All sharing options for: Gerald Green is shooting & jumping over the moon as the Suns utility player and Jamal Crawford-type scorer

The one thing about the Phoenix Suns this year, more than anything, is the fact that none of the difference makers on the roster have ever been in the position they are in now. Everyone is new to their role and responsibilities.

There were a lot of questions as to how each individual would react to their new roles whether they would rise to the occasion or struggle under the pressure.

So far, with the exception of a few, everyone has taking this opportunity head on spearheaded by the rise of Gerald Green.

Rise may not be the correct word, but it punctuates the play of Green so far this season. He has risen up in every scenario and moment thrown at him as a starter, reserve, mentor, and hired gun of Coach Jeff Hornacek to score points in bunches. On this roster Green is one of the few players with the athleticism to rise up in transition, rise above the rim, and have the shooting acumen to rise up as a threat from three-point range. Offensively he is a weapon that can change the momentum of a game if used appropriately.

"Gerald can shoot the ball," Coach Hornacek on Green. "He can finish plays and offensively he really adds something to our team. He spreads the court out; he's not a guy who has any problems about taking shots. Sometimes you have to live with some shots he takes, but he can make some of those crazy shots too so you kind of just let him go. He's kind of our Jamal Crawford-type guy. You like to see him be that aggressive guy because he's one of the guys on this team that can put up points in bunches."

Those are all things that Green has been able to do his entire career.

Green is an offensive weapon. His athleticism and offensive potential are what led to him being drafted 18th Overall in the 2005 Draft by the Boston Celtics.

He's kind of our Jamal Crawford-type guy ... He's one of the guys on this team that can put up points in bunches. -Coach Hornacek on Green's Impact

In his first four years in the NBA Green hung up four different jerseys in four different locker-rooms before heading to Russia for a two year stint. He was unable to find a coach or an organization that gave him stability and consistency. At 23 years old Green went from high school phenom -- the last first round pick to come straight from high school to the NBA, to trade chip, to flame-out, to out of the league.

Those two years in Russia gave Green the fortuity to mature as a basketball player and find his role on the court.

Over the years he was more of a fill-in star than a regularly used rotation player.

In Boston the only opportunity Green received with any consistency was as Paul Pierce's replacement in the starting line-up for 26 starts to showcase him for an eventual blockbuster trade. That was a bad Celtics team that finished 24-58 and was 2-24 during Green's run as a starter. Overall Green has started 47 games in his career before landing in Phoenix between the Celtics, Mavericks, Nets, and Pacers with a combined record of 13-34 in that role.

All of those opportunities were as Band-Aid's for injured starters like Pierce in Boston, Josh Howard in Dallas, and Lance Stephenson in Indiana. Green was never the man because he was the man, but here in Phoenix the Suns are giving him a unique opportunity to make that type of impact.

"I do not think I was trying to resurge my career here... I am trying to win," Green on coming to Phoenix with an eye on a career resurgence. "I am here to try and get this team back to what they used to be when I got drafted. That is my goal. I came from a team that was one game away from being in the NBA Finals, even if I was playing or not playing; I was a part of that team. You always have to reach for the moon and fall among the stars, that is what I have always been taught."

The renaissance may not have been planned, but it is happening.

When you watch Green practice before games or on off-days it is ever-apparent that he is just dripping with raw athletic talent. He is so smooth with the ball as a shooter and has great fluidity as an athlete that allows him to make plays on both ends of the floor.

Early on he has consistently been one of the last guys on the floor and leaves the most sweat on the court after working out.

Sample size and all, Green is having a career stretch for the Suns as a utility player for them. He has started two games for the injured Eric Bledsoe, four for the injured Goran Dragic, and come off the bench for the other five providing the same level of play no matter the situation. He is playing this season like a veteran who has seen the ins-and-outs of every form of basketball from the dregs of the league to title contenders.

Green has never had a stretch of nine games like he has to start this season playing 30 minutes per game, scoring 16.9 points per game, and shooting 49.5% from the field (47.5% from three) mixing in starts with his bench role. 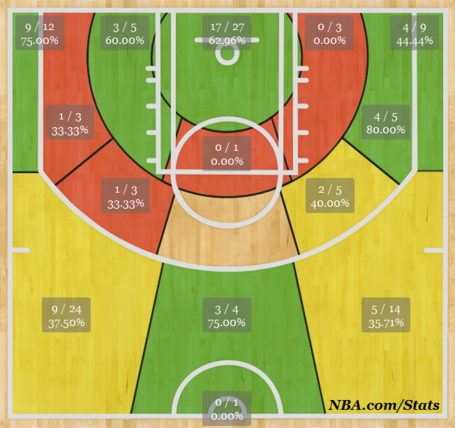 His role as a utility player has been key to the Suns success. Last season the team had zero players that had the ability to finish in the paint (62.9%) and stretch the defense (46.9%) to the three-point line extended.

Those offensive numbers have been invaluable this season.

None of which had the same intimidation as Green attacking the rim.

With teams having to honor Miles Plumlee at the rim, the attacking nature of Dragic and Bledsoe, it opens up scoring opportunities for Green. He has been put in a position to take advantage of his athletic abilities with highlight plays above the rim and game changing bombs from behind the arc. This season Green has checked off his gamely quota of a highlight dunk and a big three every game, sometimes multiple times a game. The season though is a marathon and the nine game sprint will be tough to keep up with, no question, and will be the biggest question as the season grows longer and longer.

Coach, I have never had a coach that kept telling me to shoot it every time... -Green on his offensive freedom

Going forward, that is uncharted territory for Green and the Suns.

This nine game stretch has been terrific, but this is something that Green has not done before. The play of Plumlee, Bledsoe, and even the coaching of Hornacek has not been tested for an 82 game season.

One thing will not change is the coaching message to Green from his head coach. After a road loss to Sacramento on the bus ride to the airport Green approached his coach with a rhetorical (statement) question: Coach, I have never had a coach that kept telling me to shoot it every time.

"Well," Coach Hornacek replied. "Gerald, that is what you do. You are a great shooter, that is why we run the stuff we do with Eric and Goran, Miles rolling hard, and if they throw it out to you just catch it and shoot it."

Whether Green is shooting for the moon or, with his freak athleticism, trying to jump over it he has succeeded in falling in with the stars as well as with fanbase here in the Valley.