Share All sharing options for: Solar Flares: Phoenix Suns News from Weeks 3-4 of the 2013-14 NBA Season

The Suns are on a 4 game losing streak, with three of them coming in a nail-biting, heart-breaking fashion. The last loss - a 113-106 defeat at home to the Sacramento Kings - was definitely the ugliest one. The Suns looked out of sync for most of the night, reminding us of the atrocity of a team we watched all of last year. The game itself was pretty wacky - the Suns scored a season-low 12 points in the third quarter and followed with a season-high 44 points in the final period.

So the last week included a two-point loss to Brooklyn, and two losses to Sacramento by a total of 10 points. It definitely wasn't the best week for the Suns, but there were some positives to take away (other than the obvious good news for fans of "tanking"). Eric Bledsoe didn't play in either of the games against the Kings and the Suns clearly missed him.

In the first game, Dragic didn't have any help at the end of the game and as a result had about as awful of a quarter I've ever seen him have. The following night, Dragic ended up with 31 points but didn't get much help from teammates not named Gerald Green. Lastly, the Suns stormed back at the end of the game when the game was all but over, displaying their tenacity and unwillingness to quit (hence the 44 point outburst). Phoenix will go on the road and try to break this losing streak in Charlotte Friday night.

Anyway, it's time to take a look at some random Suns-related content that floated around various parts of the internet this last week.

Most of these power rankings were published earlier in the week, so keep in mind that they haven't accounted for the two losses to Sacramento.

Still look like a team that plays well early and runs out of ammo, but they're also very fun and stay within striking range at most times.

The Suns were three points away from a 7-2 start, but suffered two heartbreaking losses last week. In fact, all of their four losses have been by seven points or fewer, a painful rite of passage for a young NBA team.

Interesting theory volunteered last week by ex-Sun Marcin Gortat, who says the new defensive coordinator in Phoenix -- Mike Longabardi -- is as much of an impact newcomer in the desert as Eric Bledsoe or boss Jeff Hornacek. All four losses by just 13 points combined for the Cinderella Suns so far.

They keep playing close games — every one of their games has been within five points in the final five minutes. That’s fun to watch, and while that’s not how you win sustainably it’s better than we expected from them preseason. 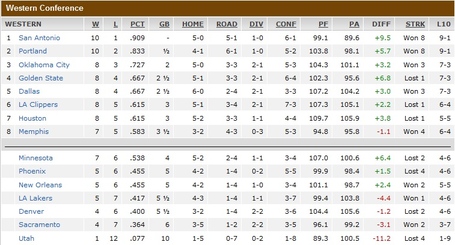 Good god, Utah. I think it's now obvious who the real tanking team in the West is...

Check out Marc Spears' profile on the Morrii over at Yahoo Sports.

Archie's steal and slam against Sacramento

Goran Dragic's dish to Gerald Green for the high-flying flush

Bledsoe said his shin "definitely got a lot better" and is about to test it. He said "I almost bit my nails off" watching last night's 4th.

Suns have dropped their last three games by a combined six points. Ironically six is also the number of years they've taken off my life.

According to a GM, the Suns will do everything possible this summer to sign Gordon Hayward to an unmatchable offer sheet....

The third Bright Sider award of this season goes to someone who delivered my favorite comment of the week. Congratulations, Alex Skinner! And thank you for your eloquent, much-needed comment about the levels of insanity we often encounter on this website:

And on that note, the runner-up award goes to dooder for providing some of the said insanity. Thank you for the hilarity, dooder. Unfortunately, you don't win the award because you are not a singular Talent worth the price of admission in and of yourself. So it’s not like you inspire awe the way MJ did in his infancy. Better luck next time, buddy.