Going Gorilla: The weekly Phoenix Suns rant - What counts as a close game?

Last week I took a look at how the Suns had fared in close games this season. Consider this part two, as I look further into what constitutes a close game and the correlation between winning % in close games compared to overall winning %.

Share All sharing options for: Going Gorilla: The weekly Phoenix Suns rant - What counts as a close game?

We have hit the last Sunday before Thanksgiving and the Suns sit at 6-6 after a practically unwatchable bounce back victory against the Charlotte Bobcats. The Suns basically dominated the second half of that game, but let the Bobcats scramble to within single digits in the waning moments. Charlotte even hit that magical number of five points with :14 left in the game...

That makes it 11 out of 12 games this season where the score has been within five points in the final three minutes. Yes, three. Don't ask me why people were disseminating the five points/five minutes stat when this makes it appear even closer. But at this point that stat has really become a farce. The Suns have played very competitively this season. They have led in the fourth quarter of every game with the exception of their home loss to Sacramento. But only a few of their games have really been close... 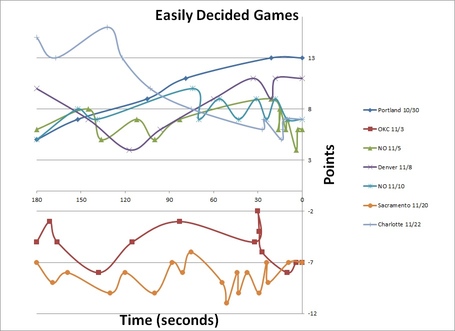 And so I have a graph... a graphtastic graph. The plots on this graph depict the scoring margin between the Suns and their opponents at each time either team scored over the last three minutes (180 seconds). Everything above zero represents the Suns leading and everything below zero represents the Suns trailing. The Suns are 5-2 this season in games that really aren't that close. Six of these got within the fabled five point mark in the last three minutes, but only one of them even became a one score game (OKC). Calling any of these close, with the possible exception of OKC, seems really disingenuous. I'll expound on this as we progress. 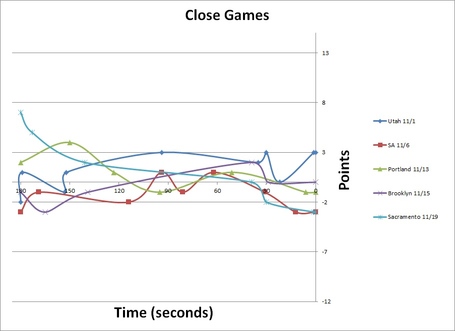 Here are the five games the Suns have played which definitively qualify as close. All five were decided by three or less points. I only tracked the last three minutes of regulation in the Brooklyn game, which went into overtime, in this graph, but I have more data that I will share on this later. See the difference? This graph is like the turkey (preferably deep fried and injected with something savory like jalapeno butter) that stuffs between the pieces of roll (perhaps pretzel rolls?) from the first graph. In these games the Suns are 1-4. 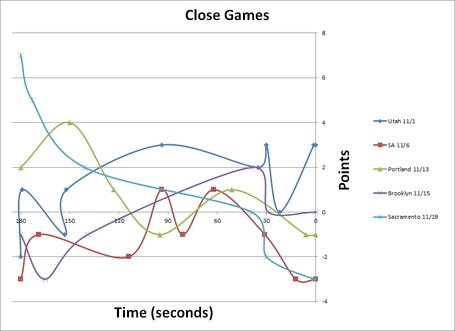 Here is the previous graph blown up to facilitate further analysis. Four of these five games were were within four points the entire last three minutes. Three of them were within three. All five had a lead change (none of the easily decided games did). 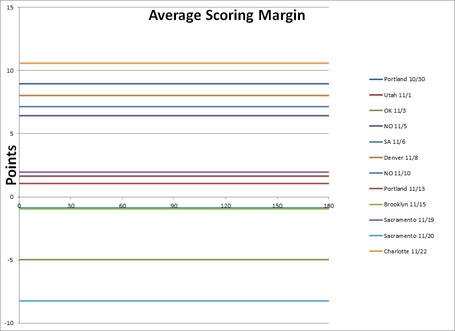 Here are the trendlines for each game. Here is the methodology for determining these values. 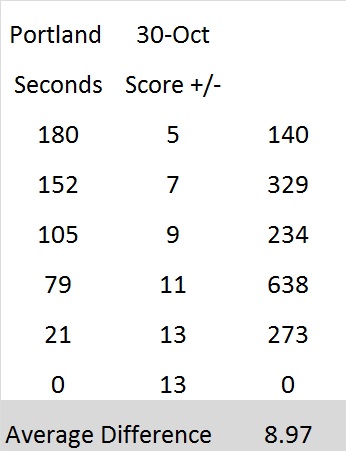 What I'm determining here is the average scoring margin between the teams over the last three minutes. At the three minute mark (180 seconds) the Suns led by five. Then with 152 seconds left they scored and led by seven. For 28 seconds (180-152) the Suns led by five points (28 x 5 = 140). They led by seven for the next 47 seconds (47 x 7 = 329) and so on. Then I add up all the totals in that third column and divide by 180 seconds. In this case the Suns led Portland by an average of 8.97 points over the last three minutes. Here are the totals for the other 11 games.

This further illustrates the case between the close games and more easily decided contests. All of the close games were less than +/- two points over the final three minutes. Among the other seven games only OKC was even within +/- five (-4.97). The other six games were all over +/- six points (6.43).

Now to try to amalgamate all of this into a more approximate definition of what constitutes a close game.

- The 12 games can be divided into two groups: five games had a +/- within two points while the other seven ranged between +/- five to 11.

- The five close games all had a lead change.

- The closest of the seven game group was within one score at a point in the final three minutes (OKC at -2 with :30 left).

From this I would offer that an average +/- somewhere between 3-4 or lower will probably always be a close game. Running this type of measurement through seasons of games could probably pinpoint a more exact number of what average scoring margin would be most all-encompassing. Some other games where a team rallies to within a score in the final minute will be outliers from this general rule, but should also be included as close games. A final margin of victory of five points or less is also fairly predictive, but less so than the two previous metrics.

Now, back to that final margin of victory within five points. While this is somewhat of a crude designation, it is effective enough to allow me to demonstrate another point. After the Brooklyn game there was some talk of the luck involved with winning close games. The percentages of certain shots, the ability of teams to set themselves up in situations with better opportunities to succeed, close games coming down to a 50/50 coin flip type of situation, etc.

Well, I enlisted some data compiled for me on teamrankings.com to propound the correlation between overall winning % and winning % in close games. Basically, good teams tend to win more close games than bad teams. It's not a 50/50 proposition. 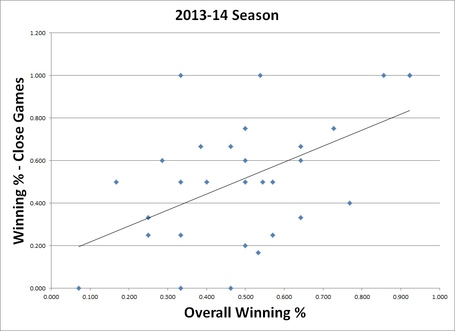 The trendline for this compilation of data shows that there is definitely a link between overall winning % and close game (decided by five points or less) winning %. This is for the 2013-14 season. But, of course, this might be misleading... Why? Sample size. Of course one would expect that teams with an early advantage in close games would also have a better overall winning % after only a dozen or so games. 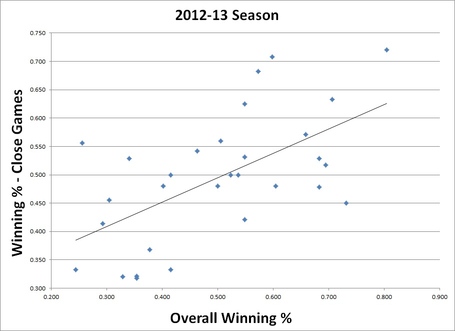 Hopefully you liked all my charts and graphs. I spent way too much time enjoyed making them. Maybe next week I will move on to a fresh topic. Or maybe not. Obsessing on this has been kind of thought provoking. Plus, rants can tend to stretch on at times.