Prior to the season, new head coach Jeff Hornacek and new defensive coordinator Mike Longabardi spoke to Bright Side about their plans to turn a bad defense and worse offense into strengths. So far, the results are there on both sides of the ball.

The Phoenix Suns have had great success so far this season on the defensive end, molding 10 new players into a cohesive unit that boasts a Top 10 defense. At the same time, they run a very efficient offense heavy on dunks, layups and threes.

The Suns don't give up easy shots, but they do generate easy ones on the other end.

The Suns' play this year perfectly mirrors the preseason rhetoric of the new GM, coach and defensive coordinator. When they were hired, they talked about a fast offense and stingy defense. But usually, offseason talk of shakeups and scheme changes result in more talk than action. Except this time it's actually happening.

That the Phoenix Suns are just 7-6 overall is an indictment of their late-game offensive execution in the half court and lack of a closer, yet they are one of the only teams in the league to hold a fourth quarter lead in 12 of their first 13 games.

Coach Hornacek wanted the team to take more efficient shots - from the three-point line and at the rim, rather than mid range. The reason being that conversion rates are higher the closer you are to the rim, and that the higher points behind the arc makes up for that lower shooting % so far out. Everything in the middle is a waste of time.

Clearly, there's more value in shots at the rim or from behind the 3-point line. Hornacek had the right idea, of course. And so far, the results are very promising.

The Suns are a small team, but they have already:

"When you look at the good teams," Hornacek said over the summer, exclusively to Bright Side. "They either have the shot or they're creating something for somebody else. Consequently, they'll get more open looks which will help their percentages. I think that every guy that you saw on this team last year can have a better shooting percentage in the coming year."

Evidence of this actually happening, as shown in this chart. Of the players in Suns' regular rotation, seven of them were in the NBA last year. Only Ish Smith has seen a drop in shooting percentage. 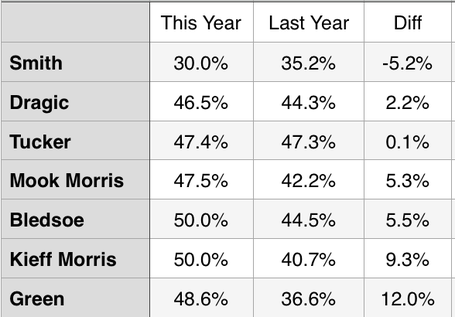 Markieff Morris and Gerald Green are the biggest improvements, and it's easy to see how. Both are taking more of the best shots on the court, just as designed.

Many of the team's close shots are thanks to the league-leading fast break scoring team that feeds on back court steals that create fast break points at the rim. Otherwise, the Suns are very pedestrian in the half-court as teams pack the paint to stop Bledsoe and Dragic and don't have a quality post-up presence down low.

Still, the coaching staff works to maximize what they have. The Suns have the league's 8th-ranked "Effective" field goal % and "True" shooting % (which give credit to 3-pointers over 2-pointers) thanks to the heaving diet of fast breaks and three-pointers.

"When we look at things now with analytics, you see that the effective field goal percentages are 51%," Hornacek said in an exclusive interview with Bright Side over the summer, in preparation for the season. "That's why a bunch of these teams are shooting a ton of threes because they get more value for their shot."

The key to this offense has been the success of the three-point shot. The point guards often drive to the hole to draw the defense, and then pass the ball back to the weak side for an open three behind the backs of the defenders. Dragic and Bledsoe are very quick and good at scoring near the rim, forcing the defense to adjust.

But all of this is moot if the guys can't make the three pointers.

This season, the "tanking" Suns have made 10+ three-pointers in each of their last five games, and made 10+ 3s seven times already in 13 games

This season, the "tanking" Suns have made 10+ three-pointers in each of their last five games, and made 10+ 3s seven times already in 13 games overall for a season average of 37.2% (9th overall) on 9.6 makes a game. Last year, by contrast, the Suns only made 10+ three pointers fives times all year, sinking only 32% of their tries.

But while the Suns are working toward more efficient shots, they are turning the ball over at an alarming rate which hurts their offensive results (just 17th in points per possession, which includes those that end in turnovers).

If the Suns could cut down their turnovers, their offense could be even more effective just by doing what they are already doing today.

The scheme is clearly working.

"If you don't take a good shot on offense, it's going to hurt you on defense," assistant coach and defensive coordinator Mike Longabardi said to Bright Side before the season. "Likewise, if you don't play good defense, you're going to get a worse shot on offense."

It's the defense that has carried the Suns this year, grounded in defending the three point line and the rim. The very shots that the Suns want to take are the shots the Suns want to stop the other team from taking (and making) as well.

"The team that gets the most easy shots is the one that wins," Longabardi said. "So your job on defense is to make it hard for the other team to score."

Seems elementary, right? Defend the shots you don't want them to take while leaving the bad shots open. Boston did that for the last several years, and now the Suns are doing it behind Longabardi's schemes.

Last year, however, the Suns were dead last in three point field goal defense (.388) and tied for 25th in eFG% (.512) against. They limited the opponents' three-point attempts okay (4th in league, allowing only 17.9 per game), but their poor rotations left those shots wide, wide open.

After allowing five of their first 13 opponents to shoot better than 50% in a game, this year's Suns have not allowed any of their opponents this season to exceed that mark.

Asked about the difference between last year and this year, in terms of attention to defense in practice, P.J. Tucker calls it "night and day".

These Suns are not the most talented set of players to ever wear Suns uniforms. There is not a multi-time All-Star on the roster, and their best two players have shared the court only four times in 13 games. They are inexperienced, with each man playing a bigger role than they've ever played before.

But these Suns are buying into a great scheme, orchestrated by the Suns coaching staff, and playing as hard as they can.