Phoenix Suns are hoisting threes at historic rates, taking what the defense gives them

A year after being one of the league's worst offenses, the Phoenix Suns are forging a way into the league's upper echelon of offense by taking the right shots at the right times.

Share All sharing options for: Phoenix Suns are hoisting threes at historic rates, taking what the defense gives them

The other day, I wrote how the Suns are taking more efficient shots this season - those most likely worth the most points per attempt.

Today, I will delve more in depth on the Suns' shot distribution this season compared to prior years to illustrate the shift to more three-point shooting and away from long two-point shots. Pretty pictures are included, for those still tripping on tryptophan.

The shot with the lowest value per attempt is anything outside paint but inside the three-point line. Of course, teams need to be able to shoot from all over, and the better shooters you have the more games you will win.

But if you're starting with a team who can't shoot from anywhere at a high clip (last year's Suns), you might as well at least have them take higher-value shots than not.

Interim head coach Lindsey Hunter famously said last spring, when asked about Michael Beasley and the Morrii's propensity to settle for long two-pointers, "I don't care where the shot comes from." He followed that up with, "I don't care if they miss as long as they are aggressive."

Let's compare the Suns' 2012-13 shot distribution to this season:

Conversely, this season you can see a mighty shift. This season, the Suns are shooting more than twice as many high-value three-pointers as long two-pointers. As a result, with many of the same shooters as last season (the Morrii, Dragic and Tucker anyway), the Suns are now 10th in offensive efficiency after 15 games.

In fact, the Suns fact have made such a dramatic shift in their offensive shot distribution that they are second only to Houston in rate of three-point attempts per possession. No one else takes as many three-pointers as a percentage of their offense than the Suns and Rockets.

Houston is an anomaly in this league. Check out this shot distribution for the Houston Rockets: 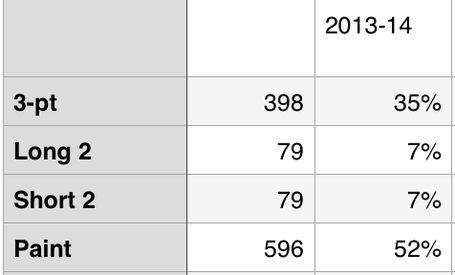 A full 35% of their shot attempts are three-pointers and - in eye-dropping fashion - just 14% of their shots are anywhere at all between 5 and 20 feet from the basket. We already know that's the worst value on the floor. Go Houston.

Houston is definitely an anomaly though. Every other NBA team knows that three-pointers and shots in the paint are the highest value, so they gear their defense around stopping those shots and forcing the low-value ones. Most other teams are much more evenly distributed across the shot ranges.

The Suns defend the three-point line and rim at a high clip, resulting directly in their 10th overall defensive rating, even after playing offensive juggernauts Miami and Portland this week.

Let's look at some of the other top offenses' shot distribution this season:

It's interesting that the Clippers, with Blake Griffin and DeAndre Jordan helping dub them "Lob City", only take 34% of their shots in the paint - much lower than the Rockets, Spurs, Heat and even the Suns.

It's kudos to the Suns' coaching staff that they have figured out ways to score more efficiently based on shot distribution without having the benefit of supremely talented offensive players like Chris Paul, James Harden or LeBron James.

Speaking of extremely gifted offensive players, I was curious how the Suns' shot distribution looked when they were the top offense in the league back in the mid-2000s.

As you can see, the mid-range shot was a staple of the best Suns offenses of the last decade, with the maestro Steve Nash calling the shots. No problem there.

But when you've got an offensively-challenged team, as Jeff Hornacek does this season, it helps to at least take the best shots possible.

The Suns are taking 71% of their shots either at the rim or behind the three-point line, a higher rate than any of those prior teams. None of the others grouped more than 66% of their shots in those ranges.

And the current team is taking more threes per possession than any team in Suns recent history, as well. None of the others even reached the 30% mark from that range.