In this inceptive episode I discuss Suns' security policies, chicken Gorilla wings and punctuality, and a certain player for Phoenix who is so scalding he might as well be walking on the Sun.

Share All sharing options for: Going Gorilla: The weekly rant

Special thanks to Dustin Watson (watdogg10) for letting me use his original image as my cover art.

When tasked approached with the proposition of developing an idea for a weekly article (yes, this will be repeated in regular intervals) I instantly knew where I'd like to shift my focus.  While some like to report the facts with a degree of journalistic credibility I have a proclivity for scathing editorials about random topics of my choosing.  Ranting and raving can have a positive connotation too, however, andI won't hesitate to issue enthusiastic encomiums when they are deserved. Given liberty to use creative license and explore my tendentious, and sometimes sententious, nature here is my inaugural offering. 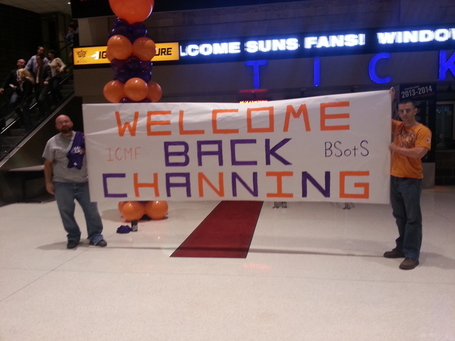 I had my daughter take this picture after the game.  Cool sign, huh?  Why do I only have a picture of it in the lobby? Let's review some history.

This whole fiasco was both upsetting and puzzling.  I made a 4' x 12' welcome back banner for Channing Frye's triumphant return, hoping to display it when he was announced during the introductions. I spent about $30 and invested ~6 hours on this venture.  Plus, I enlisted the aid of my wife and kids to help paint.  I went to the arena for the season opener Wednesday night with banner in tow.  My friend, daughter and her friend joined me (for what actually turned out to be a quality performance by the Suns).

Then something unforeseen occurred.

When passing through the security checkpoint to enter the arena I was told that I would not be allowed to bring my banner in for the game.  At first the security guard seemed unsure, vacillating over whether he would permit it. He took it and inspected it, looking down the hollow center.  Then he came to a verdict. It violated the team's size policy.  I found this somewhat interesting since it was rolled up like a set of blueprints, so they would have no idea of its actual size. I even offered to unroll it and display it for them, but they weren't interested.  I told them that it was a welcome back banner for Channing Frye, but they weren't interested. They brought over a supervisor and he wasn't interested either.

They did offer me the option to surrender the sign to their care during the game rather than just confiscate it (after all, what diabolical plan might I have constructed involving this purple and orange production) or make me throw it away or return it to my vehicle. What noble fiduciaries. To their credit at least it was still there after the game. 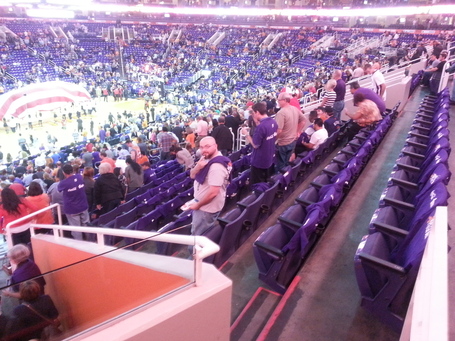 One may be inclined to speculate that I cherry picked this picture to prove my point by taking it right before a horde of people arrived, but that is not the case.  All of these seats remained empty throughout the game, with the exception of two in the row in front of me. Those people didn't arrive until halftime, though, so I'm disposed to think that they just meandered down from the upper level during the intermission.  In fact, all of those free t-shirts were still sitting unclaimed until late in the game when some fat kid shuffled around swiping them all up.  Hilariously enough, he returned them to his mother in the next section over, who proceeded to stuff them in her purse.  It was a big purse, because she stuffed like 20 damn shirts in there.

Speaking of shirts, and divagating from my current topic, I really prefer when they hand them out where they check your tickets (and the Suns have done this before).  That way they can actually have different sizes (at least until they run out). I am not an extra large.

I sure as hell wouldn't have been blocking someone's view and I could have actually done the Suns a favor by laying the banner over some empty seats to provide an illusion of increased attendance.

To be honest, it had never even occurred to me that they wouldn't let me bring the banner in. My family said the thought never crossed their minds.  My friend who attended the game with me was stoked. Maybe I'm just oblivious to normal policies for these types of events... So of course I looked them up afterwards on the policies and rules page on usairwayscenter.com. Here is what it read:

Banners and signs are allowed at the US Airways Center, however, they must be constructed of flame-retardant material and may not be displayed during play due to sight restrictions.  Signs must be made of a soft material that can be folded (e.g. poster board or cloth).  Banners or signs may not be commercial in nature or obscene, or cause any disturbance to other fans.  Banners and signs must be hand held and may not obstruct the view of other guests or US Airways Center advertising signage or be temporarily or permanently affixed to the building structure.  The US Airways Center reserves the right to remove ANY banner or sign without exception.

Let's go down the checklist.

1. Must be constructed of flame-retardant material - Hmm.. I looked this up and found a list of flame retardant materials. The list included such things as rock wool, asbestos cement, brick, concrete, twaron, nomex and kevlar.  My banner was not constructed of any of these things, it was a semi-glossy type of heavy duty paper, so I conducted an experiment.  I tried to light the material my banner was made of on fire (without forming a coalition prior to doing so). After repeated attempts it just wouldn't catch.  No violation.

2. May not be displayed during play due to sight restrictions - I was trying to tell security (while they were busy ignoring me) that I only planned to display the sign once during the player introductions.  Also, I was planning on putting it across the top of one of the entrance tunnels with my friend and I on each side holding it.  No sight restriction anyway. Plus, I could have held it up right in my section without obstructing anyone's view.  There was nobody there. No violation.

3. Banners may not be commercial in nature or obscene, or cause any disturbance to other fans - Like I mentioned, they didn't even look at my sign after I offered to unroll it. I don't see how my banner would have been construed as offensive in any imaginable way.  No violation.

4. Banners and signs must be hand held and may not obstruct the view of other guests or US Airways Center advertising signage or be temporarily or permanently affixed to the building structure - No violation.

5. The US Airways Center reserves the right to remove ANY banner or sign without exception - The good old right refusal clause. Stymied again!

So even though there is no formal size restriction, they made the judgment call that my banner was too big (without even knowing how big it was) and would obstruct the view of the handful of fans nearby in my section even though I tried to explain why there wouldn't be an issue.

What was really fun was trying to explain this to my daughter, who had helped make the banner and was looking forward to it being displayed.  She turns 13 in February and I have made it a point to take her to games with me because I'm trying to brainwash encourage her to follow the team so we can hopefully share that bond as she grows up. She was upset and asked me (paraphrasing), "Don't they know you write about the team and just want to support Frye?" Hopefully this doesn't become one of her more memorable games for the wrong reason...

So congratulations.  Security managed to avoid the imminent threat I posed to detract from everyone's enjoyment of the game while possibly even compromising the safety of other fans. Yeah. In retrospect, maybe I did go a little overboard, but what harm would have been done by letting me show Frye some love in the intros.  They could have always confiscated the sign at any time during the game and/or kicked my ass right out of the arena.

This was a lot of fun.  At first I was a little anxious when, at 5:37, I was still the only one sitting at a trio of tables I reserved. The meetup was at 5:30. By this time I'd already ordered maniac flavored Gorilla wings (which are delicious) so I couldn't even discreetly sneak out the Washington exit. I've never been stood up on a date before (and I've only went on one blind date ever - that's when I met my wife), but I imagined this might be similar to what it would feel like.  Well, without the real or imagined expectation of you know what at the end of the night.  Awkward. But then the less than punctual attendees started to straggle in.  Enough people showed that I didn't have to feel like a humiliated loner. That's a plus.

Everyone was very affable and most managed to put up with me not just at Majerle's, but all the way through the final buzzer of the game as a group of us sat together.  The events immediately before that buzzer might have also contributed to the festive atmosphere. It was my pleasure to meet everyone.  One contributor in particular seemed to have a very similar sense of humor consisting of a combination of sardonicism and facetiousness.

I wouldn't mind doing this again in the future.  It would be nice if we could elicit even more participation.

How hot is Eric? Dude is straight 100 degrees Celsius.

I decided to look this up in a historical context. Here are a list of the accomplishments of some more notable acquisitions (via trade and free agency) in Suns history through three games.

Maurice Lucas - 20.0 points, statistics incomplete (he did have 11 rebounds each in two of the games)

Basically, EB compares favorably to some of the best acquisitions in franchise history. Obviously guys like Larry Nance, Alvin Adams and Amare Stoudemire aren't on here since they were draftees.  Likewise, KJ was acquired at such a young age that his first three games were very forgettable (although his fourth was pretty good).

Now, despite these pyrotechnics, there have still been areas of Blade's game to be critical of.  He appears lost at times on defense.  He walks the ball up and engages in fits of over-dribbling, which sometimes result in pull back jumpers from 18-22 feet.  He shoots too many three point shots (and long twos) in general and too many contested ones more specifically, especially for a guy who is still a poor shooter at this point in his career.  He has struggled with ball control and displayed questionable judgment at times.

What's great about this is that many of these should be correctable.  In addition to the panoply of impressive skills Bledsoe has displayed there is actually room for improvement.  Maybe not improvement in terms of the raw numbers above since his are pretty staggering through three games (small sample size), but improvement in terms of less bad plays.  How much better would his start have been if he was down to just 3.0 turnovers per game?

Closing out that second game for the Suns with 14 straight points and that filthy game winner had to be near the top of achievements for new arrivals to the team as well.

The book on Bledsoe still remains to be written, but so far the first chapter is captivating.

Future Going Gorilla posts will go up on Sundays. I chose that day because of the dictates of my schedule I feel that I can crush the NFL in terms of your allegiance. Hopefully you'll be going bananas in anticipation.