Phoenix Suns try to break a dry spell against the Spurs, but will have to do so in a back-to-back after playing so well on Tuesday night.

Both the Phoenix Suns and the San Antonio Spurs are trying to go 4-1 with a a win on Wednesday night. Both just came off a big second-half comeback to win on Tuesday. And both are trying for that 4th win on the second night of a back to back.

But that's where the similarities end.

That title would have effectively bookended Tim Duncan's stellar career with 5 titles in 14 years as a Spur. But alas, Ray Allen made that miracle three-pointer to tie and send the game to overtime. Everything went downhill for the Spurs from there. We all saw it happen, and predicted it would go exactly as it did - with a Game 7 loss that was rarely in doubt. Now, the Spurs are still without a title since 2007.

This year, the Spurs enter the season yet another year older. At some point, they have to slow down right? At some point, Manu Ginobili and Tim Duncan will fracture a hip trying to run down the court on a fast break.

But that time is not now. And it may never come. The Spurs are just as strong as ever, playing exactly the way you'd think they play: hard, smart and just good enough to kick your butt before 48 minutes have passed.

The Phoenix Suns, on the other hand, are decidedly NOT playing the way many thought they would play.

They come into the Spurs game having sported a top-6 ranked defense along with an offense buoyed by making 26 of their last 60 three-point attempts which further helps the dribble-drive efforts of young star Eric Bledsoe.

A year ago at this time, the Suns were 1-3 with a terrible offense and shaky defense. Clearly, this team is playing better than last year. That question is how much better, and for how long. 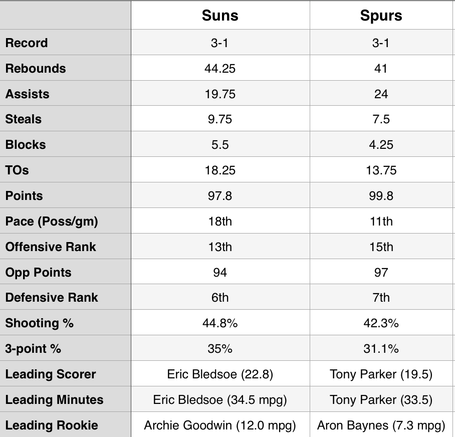 As you can see, the Suns are playing well. But their pace is just as confounding as the quality defense they play. Over the summer, the prevailing thought was that the Suns would try to run teams out of the gym while surrendering more points than they scored. Yet, their defense is better than average and their offense appears to be stuck in mud. 18th in pace? Really?

The Spurs, meanwhile, have built up similar stats to the Suns by beating the Memphis Grizzlies, LA Lakers and Denver Nuggets while losing to the Portland team the Suns beat.

I love this, from nba.com's recap of last night's game.

NOT: One game removed from arguably his best all-around performance, Anthony Davis struggled from the field for much of the night against a scrappy Suns' frontcourt which kept him out of the paint and forced the athletic 6-foot-10 to settle for jumpers and contested everything at the rim. Davis made just 4-of-15 from the field and didn't even attempt a shot in his seven fourth-quarter minutes.

BAD MOVE: Davis was also neutralized defensively late in the game, by defending the perimeter for a handful of Phoenix's final possessions when the game was still within five points. Without the prolific shot blocker underneath the basket and a small Pelicans' lineup on the floor, Bledsoe had clear paths to the basket once he dribbled past the first layer of the defense.

Reminds me so much of the Suns of old - taking the bigs out of the paint with spacing, and opening up the lane for drives. A really, really great sign of the scheme that Jeff Hornacek brings to the table. Love it!

We're spending a lot of time coming up with nicknames for each of the players in this exciting Suns lineup. How about this one to bring in a whole bunch of scrappy players together:

Rolls off the tongue, don't it?

Since the Miles Plumlee vs. Tiago Splitter debate would rage on too long, let's settle for young Eric Bledsoe against Tony Parker.

Both players put up their stats in the context of a winning environment. Whoever wins Wednesday's matchup between these two will go a long way to deciding the game winner on the night.

Suns win this game, or alternately: the Suns lose this game. Who the hell knows, right? The Suns certainly aren't following any preseason script, so whatever happens tonight will be what happens. But there's very little certainty with this team at this time.