The Denver Nuggets got off the mat last night to get a win on the young season, while the Suns are basking in the glow of growing appreciation for their game. Both team play an opportunistic offense, potentially turning this one into a high-scoring affair.

Share All sharing options for: Preview: Phoenix Suns (3-2) host Denver Nuggets (1-3) - will it be a barn burner?

The Phoenix Suns return home from a 3-game roadie to host the discombobulated Denver Nuggets, who are struggling to find themselves as a team with a new GM, new coach and new emphasis on playing style.

I had a great email exchange with Nate Timmons, editor of SB Nations's DenverStiffs.com on the current state of the Nuggets.

Now that the Nuggets are 1-3, people are asking a lot of questions. The roster doesn't totally seem to fit the style yet, but Brian Shaw also isn't liking what he has seen. People think he doesn't want to run, but I spoke with him, at length, about how he does want to run and use the altitude to his team's advantage, but how he also wants a good half-court and defensive team. The word around Denver is "patience", but I'm not sure people are wanting to see the franchise continue on with the parallels to the Suns (who have spent years re-tooling and re-building).

For more on the Nuggets, including where they go from here, check out the whole interview.

In terms of injuries, it's important to know that Danilo Gallinari and Wilson Chandler - two of their best wing players - have not played yet this season and won't play tonight either.

Sure seems like the Suns and Nuggets have switched places this off season. While the Nuggets have fallen into disarray, the skies seem to have cleared for the Suns. Coming off a close loss to the Spurs in which they left the Spurs impressed, the Suns now have a chance to go 4-2 on the backs of their defense and opportunistic offense.

Somehow, the Suns defense is still 7th in the NBA despite allowing 15 4th-quarter points to Tony Parker, while their offense is good with fast breaks it's not a fast offense overall (still just 14th in pace, or number of possessions per game).

Goran Dragic and Alex Len are both still day-to-day with ankle issues, and would only be a boon if they play. Still, the Suns have played well without them this week, and should still be able to carry the torch if they miss another game. 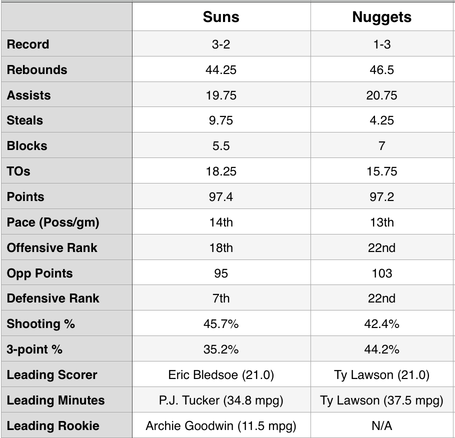 What really stands out is that the Suns are much better at creating turnovers and playing defense, in general, while the Nuggets have been tremendous on three-point shooting. What's been a bear in the past has been 3-pt defense, but the Suns are now 9th in the league at defending 3-pt shots (32.6%), so that will be interesting to see.

Only Ty Lawson plays big minutes for them. The Nuggets rotate a lot of guys through, and Andre Miller and Nate Robinson are just as likely to get burn on the wing as anyone else. In the front court, it's just as likely that Faried will start ahead of Hickson, or that Anthony Randolph will get more burn than Hamilton.

Clearly the key matchup is the point guard battle between young Eric Bledsoe and the guy he's trying to outplay to get a richer contract, Ty Lawson. Bledsoe is bigger, but otherwise Lawson is just as quick and strong with a bit better shooting stroke and three years of starting games in the playoffs under his belt.

With Denver coming off an emotional, hard-fought win last night while the Suns came home yesterday to rest from an exhilarating roadie, it looks like the Suns will have the advantage in energy tonight.