In the last week, the Suns only had two games - they were able to cage the Raptors at home with a 106-97 victory and beat the Lakers in Hollywood 114-108. In short, the Suns took care of business.

The win against the Lakers was especially satisfying, both for obvious reasons - beating LA is ALWAYS a pleasant experience - and because it was simply a well-played game by Phoenix. The Suns led for almost the entire game and showed great poise by maintaining their lead and withstanding any run the Lakers attempted to make. This victory was arguably the best road win of the season for Phoenix, and it was made even sweeter by the fact that it came against the Lakers in Kobe Bryant's second game back.

I'd just like to point out something that makes me a very happy Suns fan: Phoenix's backcourt of Goran Dragic and Eric Bledsoe is averaging a collective 37.0 points, 12.5 assists, and 7.0 rebounds per game. Those fantastic numbers are among the best of all starting backcourts in the NBA. The only other ones that rival the production of DragonBlade/Bledgic/Dragsoe are the "Splash Bros" in Golden State, Steph Curry/Klay Thompson (44.6 points, 11.5 assists, and 7.6 rebounds per game), Portland's duo of Damian Lillard/Wesley Matthews (36.9 points, 7.5 assists, and 8.1 rebounds), and John Wall/Bradley Beal (currently injured) in Washington (40.2 points, 12.6 assists, and 8.6 assists). It should be noted that both Wall and Beal are shooting below 42% from the field this season.

Factoring in overall output and efficiency, one could make a strong case for the Suns having the best starting backcourt in the NBA outside of Oakland, CA. Enjoy it, Suns fans.

Let's now take a look at some random Suns-related content that floated around various parts of the internet this last week.

Most of these power rankings were published earlier in the week, so keep in mind that they haven't accounted for the win against the Lakers.

By the time you realize this team isn't tanking, they've kicked your ass.

The Suns might have more staying power than we thought. They've won six of nine since a four-game losing streak and they rank in the top 10 in points per possession and net rating. Best of all, Phoenix plays with high energy on a nightly basis, an impressive feat for an inexperienced team playing under a first-year coach in Jeff Hornacek.

Eric Bledsoe is back from his shin injury and back in the starting lineup. How he and Goran Dragic fare as a starting twosome will remain a fascination, especially after Dragic just rumbled for an average of 21.2 points and 9.2 assists over a recent six-game stretch that began during EB's absence.

(note that the "fact" in the quote below is entirely incorrect. Bledsoe and Dragic lead the team in scoring, while Green and the Morris twins are pretty close in points per game.

Former NBA outcast Gerald Green is second on this team in points.

Eric Bledsoe is back in the lineup, which is good news, but now this far into the season we can just say that Jeff Hornacek has to come up in any coach-of-the-year conversations. His team is playing well at both ends.

The Suns won all three games this week, including road wins against the Rockets and Lakers. Nobody would have guessed that 20 games in, the Suns would have a spot in the top eight out West, ahead of the Warriors, Grizzlies and Timberwolves. 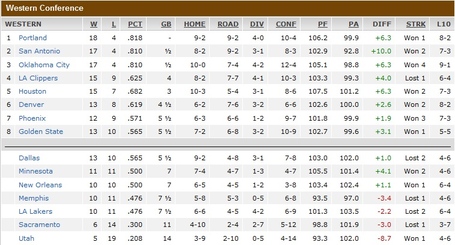 Phoenix is currently 7th in the West (ahead of Golden State, Dallas and Minnesota - who woulda thunk?). If the playoffs were to start today, we'd get yet another Suns-Spurs series.

Last week, Grant Hill revealed on TNT's Inside the NBA that Shaquille O'Neal once put a Suns teammate in a sleeper hold. Hill never revealed who it was after Shaq told him that "snitches get stitches." Earlier this week, AZ Republic's Paul Coro revealed who the victim was: Gordon Giricek - remember him? Click on the link and read the story (it involves Giricek literally passing out).

Yet another nickname for Miles Plumlee was introduced this week.  @Marco_Romo invented it and Channing Frye approved. This one's my personal favorite: Plumbledore

The Professor Plumbledore nickname inspired me to put my impeccable photoshop skills to use:

This is what happens when no one stops me and my excellent photoshop skills. Goran Dragic and the Half-BLED Prince: pic.twitter.com/2lHyhtqQBw

The Phoenix Suns' victory over the Lakers gained a lot of online attention as many people were watching Kobe's second game back from his injury. Suns got a lot of love:

Bledsoe just ran over to Dragic with a huge smile to congratulate him on that layup. That pretty much sums up why I love this @Suns team.

Last year, 6 Suns players had down seasons statistically. This year, 7 Suns are averaging career highs in points per game. #HornacekEffect

Who had the "Warriors, Grizzlies & TWolves will each lose 10 games before the Suns" parlay?

@KyleNehf At least Nuggets had remnants of a playoff team. Suns stripped down a non-playoff team…and got better

All seriousness: Morris twins have been great. Gives Suns two guys to run offense through on their second unit.

If LeBron ever teams up with another young star it will be Eric Bledsoe, not Kyrie. You can see that from miles away.

I love this Suns team.