The Suns have won four straight games, and the play of P.J. Tucker has been a big factor in that success.

A year-and-a-half ago, P.J. Tucker was just looking for a job in the NBA. He blew his first chance as a second round pick by Toronto in 2006, and spent the next five years playing overseas.

Last summer, Tucker got a second chance as the Suns invited him to Summer League. He impressed the Suns brass with his hustle, and made the team despite not lighting up Las Vegas statistically. Most of us figured he was a bottom of the bench guy who wouldn't be much of a factor. Most of us were wrong, as not only was he part of the rotation, he actually earned his way into the starting line-up and was one of the bright spots in an otherwise nightmarish season.

Tucker's aggressive style of defense and relentless hustle on the boards made him a valuable part of the rotation despite his offensive limitations. Tucker wasn't content with just getting back into the NBA, however, and put the work in this summer to improve his game.

He's started all 22 games this year, and is up from 24 minutes to 31 minutes per game this season. He's putting up 9.5 points, 5.5 rebounds, 1.8 assists and 1.4 steals per game in addition to being the Suns' best wing defender. Most importantly, and perhaps most surprisingly for those that watched him play last year, he's shooting 47.4 percent from the 3-point line.

Tucker is coming off a tremendous four-game stretch, in which he showcased all the things he does well. He opened the Suns' four-game winning streak by scoring 18 points on 8-13 shooting to go with his six rebounds, four assists and four steals. Oh, he also completely shut down Houston's star shooting guard James Harden, who finished with 14 points on 3-17 shooting and five turnovers.

Next, he put up a double-double against the Toronto Raptors with 18 points and 13 rebounds. Against the Los Angeles Lakers, Tucker struggled offensively but still managed to contribute with 11 rebounds, including a clutch offensive rebound late that basically sealed the game. Finally, he nearly put up another double-double with 10 points and nine rebounds in the Suns' first win in three tries against the Sacramento Kings.

Let's take a look at how Tucker has been so effective.

This first play is a really simple one from early in the Houston game, showcasing Tucker's technique and strength on the offensive glass. 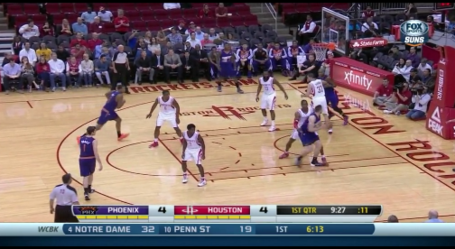 In the above picture, Miles Plumlee is posting up on the right block while Tucker is on the baseline on the other side of the lane. 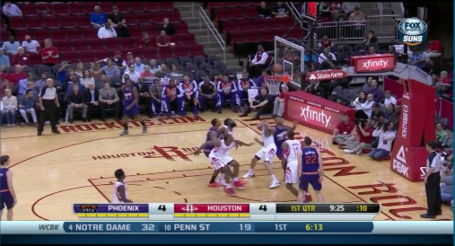 Plumlee goes up with the hook shot, and right away Tucker begins fighting for position. Originally he was sealed along the baseline, but he slides in front of his man and begins pushing him back. 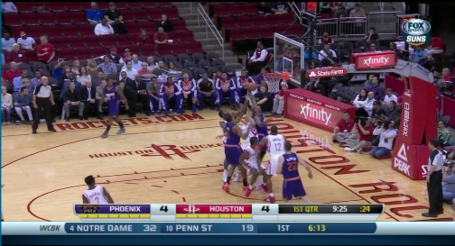 Tucker simply overpowers his man, pushing him far enough back to give himself space to jump up and secure the board. He goes back up with it and gets fouled.

This next play shows off a couple of the things he is best at as defense leads to offense. 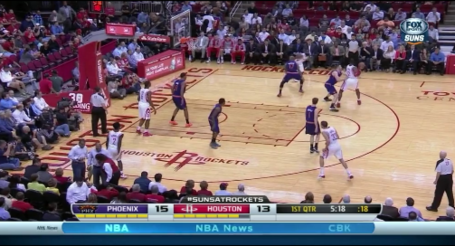 Tucker is playing tight defense on Harden as Dwight Howard has the ball out on the perimeter. Dwight is looking to hand off to Harden, but Tucker can see it coming with his peripheral vision. 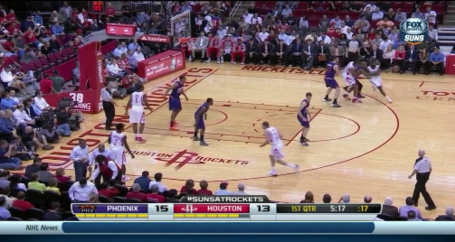 Tucker stays right with Harden as he goes to take the hand-off, and punches it loose when Howard exposes the ball. 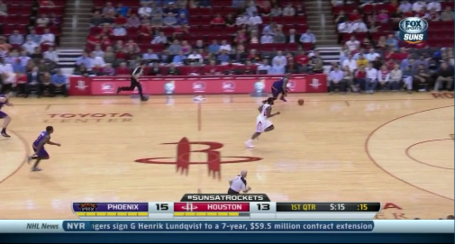 Tucker out-hustles Harden and beats him to the loose ball ... 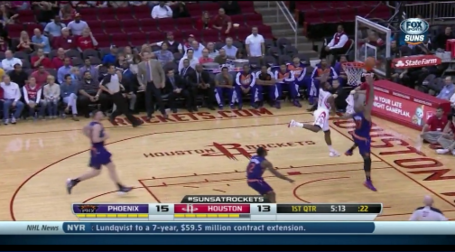 Then takes it in for a nice reverse layup as Harden flies past him.

Finishing at the rim in transition is one of Tucker's strengths. He had another play very similar to this one in the Toronto game where he stole the ball and took it all the way for two points.

This final play from the Houston game shows off Tucker's aggressive style of defense, which is what he is most known for. 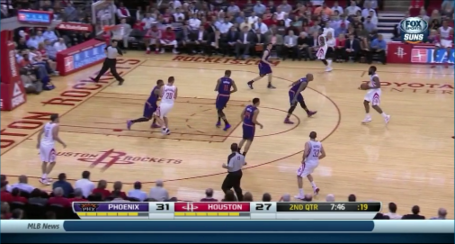 Here, Harden is bringing the ball down in semi-transition, and Tucker is waiting for him. 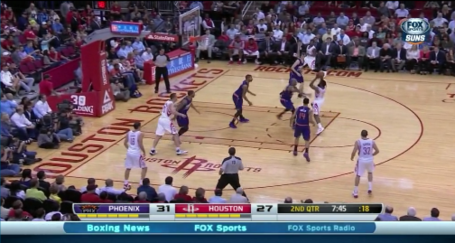 Harden keeps coming at him, but Tucker stays in front of him and Harden leaves his feet. 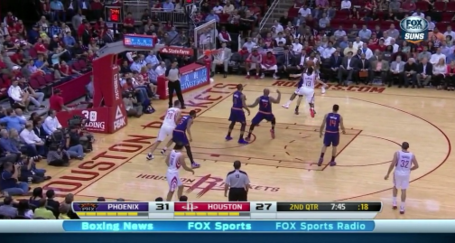 Tucker didn't give him any room to get off a shot, and he had to kick it out to the perimeter, 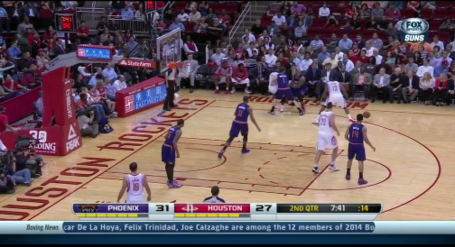 Harden goes out to either set a screen or take a hand-off, and Tucker jumps on the Rocket with the ball to trap him on the sideline. 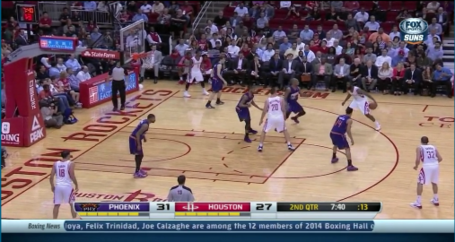 Harden gets the ball back, and Tucker recovers and gets back in front of him. 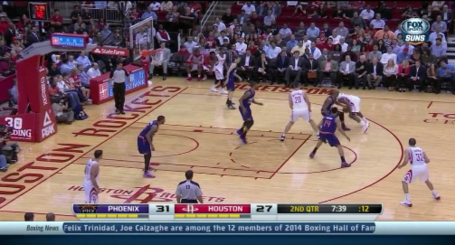 Tucker jumps out and gets right in Harden's face. He prevents Harden from driving middle and instead pushes him to the outside. 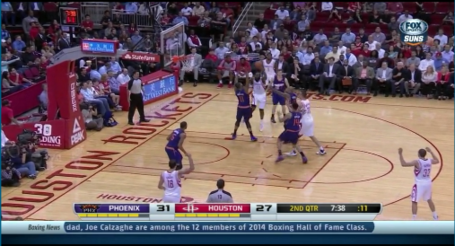 Harden gets past Tucker, but Tucker sticks with the play to make sure Harden can't get back to the middle while Markieff Morris slides over to protect the rim. Harden leaves his feet with nowhere to go and charges into Keef. Offensive foul.

This is the kind of defense Tucker played all game against Harden, and the defense he plays against everyone he faces. He made Harden work all game long just to get open, and was a big reason why Harden settled for 10 3-pointers (all of them misses).

This next play from the Toronto game shows the area he has most improved this season: as a shooter. 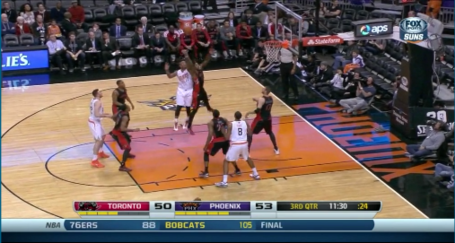 The play begins as Miles Plumlee misses a free throw. Tucker reads where the ball is going, goes up and gets a hand on it, keeping the play alive. 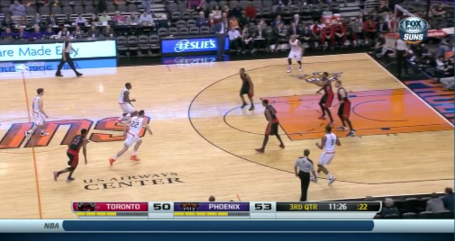 As the ball is tipped up and around and finally secured by the Suns, Tucker relocates to his favorite spot on the court: the left corner. 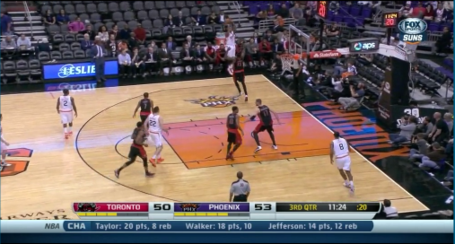 He gets the ball in his sweet spot and his improved stroke pays off as he drills the three.

This season, Tucker is shooting 14-25 (56 percent from that corner). He's 10-24 from the other corner for 41.7 percent. He's only taken eight total above the break 3-pointers (making three of them). It looks like Tucker spent almost the entire summer working exclusively on that corner three shot, and it is paying off in a big way for the Suns this year.

Let's look at one more play, another offensive rebound. Suns fans should remember this one fondly as it was perhaps the clinching play in the win against the Lakers. 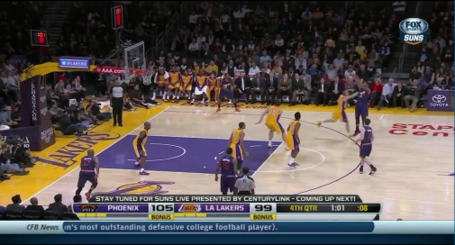 It is a two-possession game with a minute remaining, and Channing Frye lets loose a 3-ball. Tucker is in his favorite corner, and when he sees the ball going up he runs to the rim... 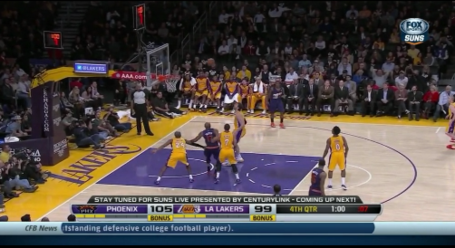 And right by one Mr. Kobe Bryant, who fails to box him out. There are three Lakers in the paint, but Tucker has pu himself in good position. 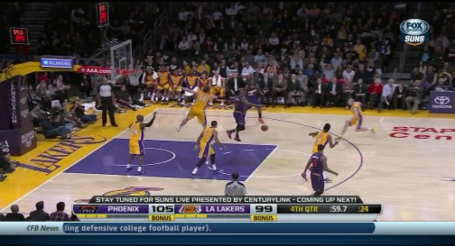 He beats all three Lakers and is the first one to touch the ball ... 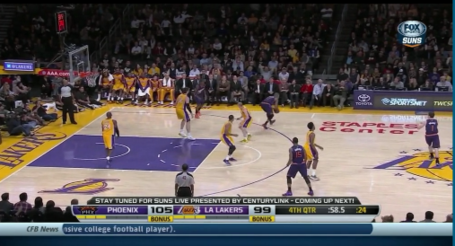 Then secures it for the Suns and gets the ball out to Goran Dragic, effectively ending the game. Thanks for letting it happen Kobe.

P.J. Tucker is not an All-Star, but his contributions have been invaluable to this Suns team's surprising success. Whether you call him "The Garbage Man" as he was dubbed by Suns.com's Greg Esposito or "Padlock" as one of our own Bright Siders have named him, P.J. Tucker's strength and effort have allowed him to succeed despite not having prototypical height or athleticism. After five years playing overseas, he has proven that he belongs in the NBA and is here to stay.