DragonBlade too hot to handle; time for a logo

Goran Dragic and Eric Bledsoe are collectively killing it this year. Therefore, I decided they deserved a collective logo.

Share All sharing options for: DragonBlade too hot to handle; time for a logo

Suns fans have known Goran Dragic as the Dragon for a long time. When the Suns acquired Eric Bledsoe, some fans dubbed him Blade; it sounds similar to his last name and is appropriate with the way he can knife into the lane. With the Suns' intention to play the two together in one backcourt, it was only natural for fans to combine the two nicknames into one. Thus, DragonBlade was born.

Some love the name (one frequent commenter on this blog even adopted it as his screen name). Some don't like it all that much. However, whether you like it or not, everyone has to admit that the imagery it evokes is awesome. Dragons are big and bad and fiery. Blades are sharp and dangerous. Put them together? Sheer destruction.

I have a little bit of artistic ability, and when I was bored one day I decided to do a little sketching.

I began with just a Goran Dragic sketch. I decided to combine his Dragon nickname with the name/logo of the team: the sun. Below is the result. 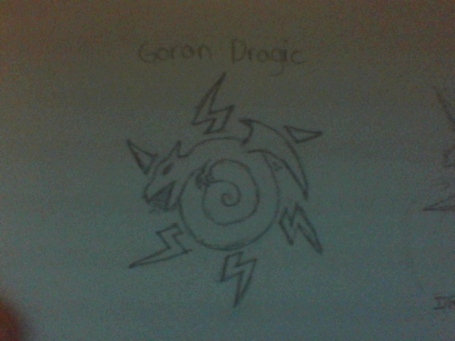 I liked it, but decided to take it a step further and develop one for Dragon and Blade together. I kept the same spiral dragon with sun rays design, only I made the dragon out of fire (to even better incorporate the Suns) and used the sun rays to incorporate Bledsoe by making them sword-style blades. 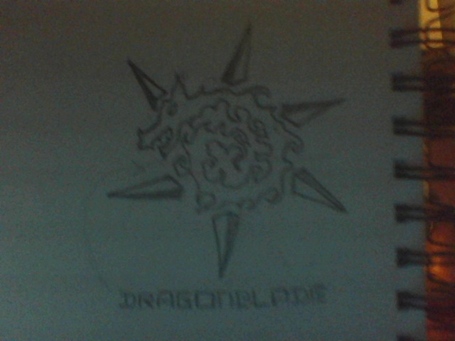 I thought it turned out pretty well myself, but didn't do anything further with the sketch. That is, until I started taking a graphic design class at Creighton.

I learned how to use Adobe Illustrator as part of the class, and after my first project turned out pretty well and I thought I had a firm grasp of the program, I decided to bust out the sketch to see if I could take it from paper to the screen.

After some trial and error, I pulled it off. Now all that was left was to make some minor tweaks until I was satisfied. I'm no Watdogg (a.k.a. professional graphic designer Dustin Watson of Dark Wing Illustration and former Bright Side staff member), but below is the final product. 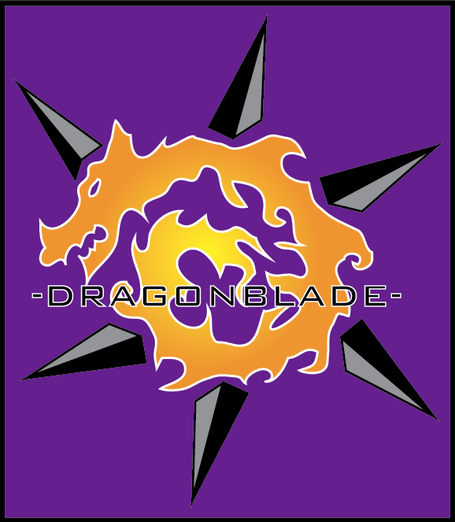 The dragon swirl I simply traced from my sketch and adjusted until it looked good enough. The blades I made in Illustrator and placed more or less evenly around the dragon. I chose a font that I thought fit well with the design and the name. Originally I had an orange dragon and a white background, but I changed the dragon to an orange-yellow gradient to make it look more like fire and added a purple background to more completely incorporate Suns colors and to make the dragon pop more. Finally, I added a white stroke around the test and changed the stroke around the dragon from black to white.

With the way Dragic and Bledsoe have been playing lately, I felt now was the appropriate time to bust this out and share it with my Bright Side brethren.

A big push has been made for the "Slash Brothers" nickname, and that is a great name as well and very timely as the Suns are set to face off with the Golden State Warriors led by the "Splash Brothers" of Stephen Curry and Klay Thompson. The Suns' duo does deserve the name. Seriously, look at the comparison of the two backcourts' per game numbers.

However, I can't have as much fun visually with the name, so I'm going to roll with DragonBlade and my DragonBlade logo. What do you think Bright Siders? Which name do you like better? How does my logo look? Do any of you have logos of your own to suggest? Let me hear you Bright Side.