In a game featuring two of the league's highest scoring teams centered around their guards, the Phoenix Suns try for another signature win over a playoff contender, the Golden State Warriors.

Tonight is one of those games that will show the nation whether the upstart Phoenix Suns are for real. The vaunted offense of the Golden State Warriors, led by guards Stephen Curry and Klay Thompson - otherwise known as the "Splash Brothers" for their shooting prowess - come to the desert to square off against the Suns' lately crowned "Slash Brothers".

The Golden State Warriors have gotten off to a slow start, relative to expectations, this season with a 13-11 record after 24 games.

While their struggles are mostly due to a tough schedule to open the season, the Warriors have surprisingly struggled a bit on offense. They are second in the league in three-point percentage (41.2) behind the prolific shooting of Curry and Thompson, but otherwise are only 12th in scoring efficiency. They don't have a lot of points at the rim.

The Warriors are hurting with injury lately, losing Andre Iguodala and Jermaine O'Neal in the last two weeks to long-term injuries. Those two helped solidify the Warriors on defense.

Really, just look at the awesome content provided by Kris Habbas, Sean Sullivan and Jacob Padilla yesterday. Top notch analysis on so many aspects of the Suns.

Overall, the Suns are riding a four game winning streak behind the scoring and assisting prowess of Goran Dragic and Eric Bledsoe. The Warriors defend the rim well, but Curry and Thompson don't appear to be much of a defensive threat to the Suns in this game.

Look for the back court scoring to be high on both sides. 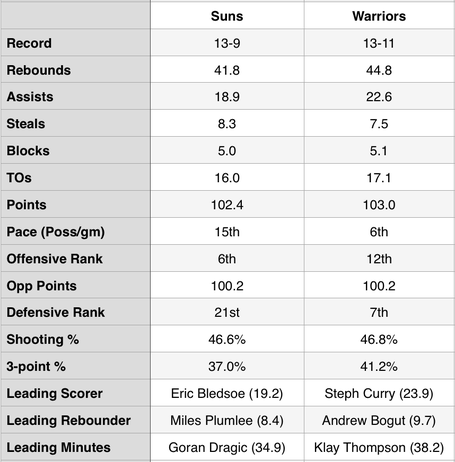 Where the Warriors really stand out is on defense and three-point shooting.

The Warriors are missing their defensive anchor on the wing, Andre Iguodala, and top backup center after former Sun Jermaine O'Neal went down with an injury last week. Rebounding will suffer in his absence.

Otherwise, rebounding and second chance points will be key in this game. The Suns are terrible at it, while the Warriors are really good. If the Warriors dominate in this area, it will be a long night.

I actually see the Suns winning this game.

The Warriors will miss Jermaine O'Neal's rebounding off the bench and Andre Iguodala's overall effectiveness on both offense and defense.