Both the Phoenix Suns and Dallas Mavericks are off to surprisingly good starts to the season, which makes a clash between the teams very exciting indeed. Former Suns Shawn Marion and Vince Carter return to the scene, usually bringing their A-games.

Phoenix Suns fans are no doubt still reveling in the 21-point comeback win last night IN DENVER to beat the 14-10 (now 14-11) Nuggets. But there's no rest for the weary. After an emotional win, the Suns will face the surging Dallas Mavericks in Phoenix tonight in another early-season clash of playoff contenders.

The Dallas Mavericks are off to a big start mainly thanks to an 11-4 home record (vs. 4-8 road record). They have feasted on Eastern competition: 7-3 vs the East, 8-8 vs. the West. On back-to-backs, like tonight's game, the older Mavericks are a solid 4-3 so don't count on them dragging butt.

The Mavericks lineup is old. Five of their regular rotation players are 32 or older (Calderon, Dalembert, Nowitzki, Marion, Carter) while the Suns don't have a single active player (not counting Okafor) over 30.

Monta Ellis and Dirk Nowitzki have been a great 1-2 punch for the Mavs, with Brandon Wright helping solidify the front line after returning this week from injury.

In a surprising note, the Mavericks have actually gone 5-2 on Saturday nights already this year. 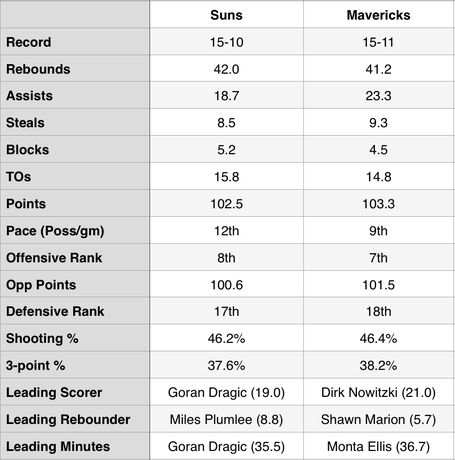 The Mavs assist and steal at a better rate than the Suns, but otherwise their stats are very similar.

DeJuan Blair took over several games ago in the starting lineup in place of Sam Dalembert, but otherwise both lineups are predictable.

As always for the Suns, a key matchup will be the guard play. The Suns Goran Dragic and Eric Bledsoe have had a couple of bad nights in the shooting department, but overall they drive the success of the Suns with both averaging better than 18 and 6.

But really, the biggest matchup is anyone trying to cover the unguardable Dirk Nowitzki. That dude is so talented and talented, you might as well call him STAT. Can Channing Frye or Markieff Morris effectively keep Dirk off his game? Or will the extra attention to Dirk leave the lanes open for Ellis drives (leads the league with 10 drives a night) and Marion/Wright/Dalembert/etc feasting on the boards at each end?

I want the Suns to win this game but I think it's really a toss up. The Suns are not good on the back end of back-to-backs, yet they are pretty good at home overall.