Going Gorilla: The weekly rant - All of the Phoenix Suns are having career years

As the NBA season hits the holidays the Suns have passed the stage of their play being posited as a mere heat check. Instead, this winter heat wave is being fueled by a collection of players who have collectively taken their game to the next level.

Share All sharing options for: Going Gorilla: The weekly rant - All of the Phoenix Suns are having career years

Saturday night the Suns beat a Dallas Mavericks team that was in a similar position in the standings. But those two teams are not very similar.  No, I'm not taking the next logical leap by suggesting that the Suns will be the youngsters singing Christmas carols to the geriatric Mavs at the retirement home this festive season.  That may be part of the reason why the dynamic I'm about to suggest exists, though.

The Mavericks just lack growth potential. Of their current core (in terms of minutes played) only Monta Ellis (barely, by way of increased scoring efficiency) and Brandan Wright are exceeding career numbers. The others are plateaued shells of their former selves or declining. Not the Suns. Every single player in the eight man rotation is on the way up or peaking. They are clicking individually and as a whole. 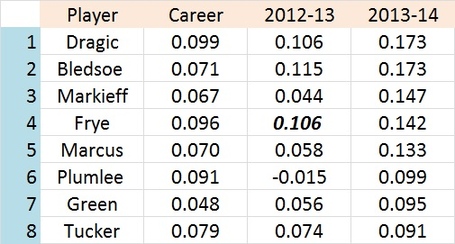 Every single rotation player for the Suns is above both their last season and career adjusted win shares number. *Frye's middle column is the 2011-12 season. 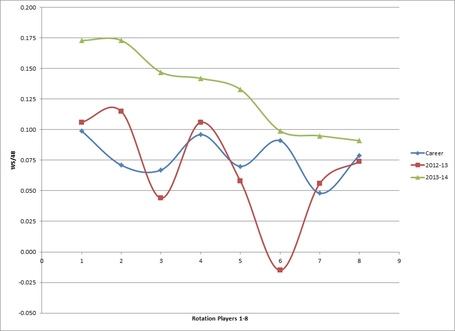 That green line at the top is the Suns this season. It's an entire squad of players at the pinnacle of their careers... with potential for growth.

Goran has been unselfish and acclimated well into the system implemented by the new coaching staff.  After being asked to be the primary facilitator last season, he is now sharing those duties.  But Dragic has been opportunistic and is excelling as a scorer with less pressure being put on him to create offense for others. His 18.7 points per game is a career high... well above his previous high from last season (14.7).  Serendipitously, increased field goal and free throw attempts have been accompanied by increased efficiency.  Dragic is currently boasting what would be the highest TS% (.585) of his career.

Bledsoe was having a hard time stepping into the sun to bask in its warmth while shrouded by the massive shadow cast by Chris Paul. Then he stepped into the Suns. Eric is averaging 19+ points and 6+ assists while shattering his previous marks for offensive efficiency. He has pretty much turned into the best case scenario of what people envisioned for him this season. One year removed from playing 20 minutes a game as a backup he is now a borderline all-star. All of this has happened in only 20 games as a Sun.

The consensus from our staff at the beginning of the season was that he would be the team's most disappointing player. Markieff has not disappointed. The biggest reason to me is that he's found his true identity, with a share of encomiums going to the coaching staff for forming the search party.  Markieff is playing like a power forward.  He has cut his three point attempts in half while more than doubling his free throw attempts.  Instead of lingering around the perimeter and hoisting ill-advised long range shots he has been attacking the basket.  In what is becoming a recurring theme, his scoring and offensive efficiency have skyrocketed. Morris has already scored 23 or more points six times this season.  In his first two season combined he scored 23 exactly once.

After being away from basketball for a year questions abounded about the timeline for a return to form.  But Frye hasn't returned to form, he's exceeded it. Frye has left his 2011-12 numbers in the dust and is nearly mirroring his career year in 2009-10.  His points per game, three point shooting percentage, TS% and even WS/48 are nearly identical. Even better, Channing has been gaining momentum after a (quite understandably) slow start. Since struggling through his first eight games Frye has been shooting nearly 51% from three point range and has hit at least four threes in a game in five of the last 18 contests.

Just as his brother's role has become more defined so has Marcus's... and he's also thriving in it.  The Suns have embraced the twins playing together on the second unit with Marcus playing the three.  Add Marcus to the list of players dusting his previous scoring and offensive efficiency numbers as he is fifth on the team in TS% (.574) just ahead of his brother. Marcus is one of three Suns averaging double figures off the bench and is another key component of a perimeter arsenal that ensures the Suns are never out of striking distance. At .424 Marcus is one of three Suns over 40% from deep. He has even upped his rebounding slightly to boot.

He is this season's P.J. Tucker... in a way.  Tucker had recorded 83 career NBA minutes (at the ripe age of 21) before embarking on a world tour to keep his NBA dreams alive, which ultimately culminated into him sticking on the Suns' roster six years later.  Plumlee was a little bit late to the NBA party as a 24 year old rookie doing his own version of P.J.'s tour on the Indiana Pacers bench.  At the age of 25 Miles has gone from 55 career minutes to quality starting center. To claim he is having a career year is embarrassingly easy, since this year is basically his career. Plumlee provides rebounding and a defensive presence which even his 1.8 blocks per game (seventh in the NBA) and team leading DRtg doesn't always fully illustrate.

Green was another dubious proposition.  Were the Suns (most likely) getting the peregrinating player who never lived up to his extraordinary physical gifts or some semblance of the person who managed to play an efficient season for the Nets? After all, his pit stop in Indiana the year after that hadn't adumbrated auspiciously for his prospects here.  But Green has found a niche by finishing savagely at the rim and bombarding opponents with threes. Dunks and daggers. He has transformed into a volume three point specialist and is the epitome of a heat check shooter this season with 4+ three pointers on eight occasions.  He can singularly shift momentum in a game.  Every time he steps into a shot in rhythm I expect it to go in.

Tucker spent the offseason doing what he's been doing for years, working indefatigably to maximize his limited potential and carve his niche in this league.  In order not to be such an offensive liability he needed to learn to knock down the corner three. Well, P.J. is knocking down threes at a .470 clip. Tucker's numbers will never blow anyone away, but after scoring at least 17 points only four times last season he has done so five times already this time around. Tucker salivates over grappling with the opponents best offensive wing or guard threat and manages to find his way to loose balls in timely circumstances. P.J. isn't a glory guy, he's a guts guy.

Sometimes perception defines reality, but my perception of what this team would be turned out to be chimerical and illusory.  My misgivings surrounding a tumultuous offseason that promised enlarged roles to players who were unproven or previously lacking were prudent but ultimately unfounded.

The reality is that this is a good basketball team.

In some cases the sum is better than the whole of the parts... but I'm not sure whether that apothegm is applicable here, because all of the parts are performing at such a high level. Individual improvement has led to team transmogrification. The coaching staff is getting the most out of the players and the players are getting the most out of themselves. The relationship within the team unit is a form of symbiotic contagion.

Was the land simply fallow, instead of poisoned like I thought it may have been after a dark comedy filled with folly and faux pas? Was the notion of this team building a winning culture, which I scoffed at earlier this calendar year, not so unrealistic?  Did a few moves disseminate this concept and infuse the now fertile soil with some much needed Ryan McMiracle-Gro?

Either way, looking back to what I thought they'd be won't prevent me from enjoying what they actually are or woolgathering over what they might become. It doesn't matter what I thought.  I won't be referring to them as a team that people underestimated or discounted. One that stultifies pundits and critics and is fighting for respect. A team of underdogs. They aren't any of those things to me anymore. They just are what they are.

The Suns are the Suns again.