In the final Solar Flares of 2013, let's take a look back at a week that saw the Phoenix Suns winning three games against Western Conference opponents.

After a well-fought but disappointing home loss to the Spurs on Dec. 18, the Suns bounced back with an impressive come-from-behind road victory against the Denver Nuggets. Phoenix followed that with an offensive outburst against the Mavericks at home the very next night, and capped off a strong week with an absolute drubbing of a depleted Lakers team on Monday.

Overall, this was one of the best weeks of the season for the Suns, featuring strong performances from a plethora of players and three impressive victories of different kinds. Happy holidays, indeed!

The Suns face a tough road test against the Golden State Warriors tomorrow night. Phoenix was able to beat this team at home earlier this month, but Oracle Arena in Oakland is not an easy place to play for a visiting team. Fortunately, I'll be at the game and my support will obviously guide them to a win. I've been told that I'm the master of starting "VIACHESLAV KRAVTSOV" chants.

Let's now take a look at some random Suns-related content that floated around various parts of the internet this last week.

They are so consistent and fundamentally sound. Steve Clifford, Terry Stotts, both great choices but my pick for Coach of the Year early on, Non-Pop Division? Jeff Hornacek.

(awarding Christmas gifts to each team) A camera. To capture this moment right now. With a roster in flux, a first-year head coach calling the shots and a team that traded its starting center a day before the start of the season, the Suns are currently playoff-bound and the talk of the league.

Can you really win in the NBA by riding two great guards and surrounding them with young, exuberant, athletic role players whose shooting won't seem to cool off? Can you believe we've been asking this question for almost 30 games? Hornacek & Co. keep winning with that exact mix.

The strangest thing about their success is that it actually is starting to make sense.

The Goran Dragic/Eric Bledsoe pairing is driving the offense most nights, but when Gerald Green gets rolling like he did against the Mavericks over the weekend (and the Suns are draining threes) they are especially dangerous.

The Suns are on pace to win 50 games this season, which would be double their wins last season and far more than people expected out of the team that was supposed to finish in the West’s cellar. This pace is a gift, but the real treasure would be keeping it.

That's a composite power ranking of #7. Ladies and gentlemen, your 2013-14 Phoenix Suns are currently about the 7th best team in the NBA. Raise your hand if you called this before the season began. Now put down your hand and go buy a lottery ticket. 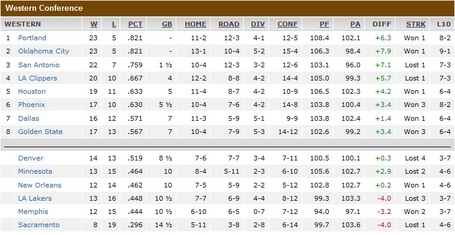 The Suns are 8-2 in their last 10 games and are currently the 6th seed - if the playoffs were to begin today, they'd face a historically unfamiliar postseason opponent in the 3rd-seeded Spurs.

Links of the Week

Yahoo Sports' Adrian Wojnarowski wrote a piece on the Suns' surprising success this year, including some great quotes from owner Robert Sarver on a change in philosophy.

Meanwhile, USA Today's Sam Amick also wrote about Phoenix's success, focusing on the back-court duo of Goran Dragic and Eric Bledsoe and how it all came together.

Videos of the Week

"DragonBlade" highlights from the first two months of the season:

Dionte Christmas, Ish Smith, Alex Len & Archie Goodwin spread the holiday spirit. If you've ever wanted to see Archie Goodwin do the dougie in a Santa costume (and let's be honest - who hasn't?), you must watch this:

Jeff Hornacek is an instant top 5 coach interview for me. He was phenomenal. Such cool ideas in such a laid back approach.

Hornacek has been taking shot clock down to 13 seconds in practice to reinforce running offense. @Suns

I love how the Suns organization, from the top down, refuses to feed the narrative about Dragic + Bledsoe being great together as a surprise

RT @JonesOnTheNBA: @JaredDudley619 man, how did you deal with @AminESPN? ( once lance got there he wasn't aloud to talk! Lol)

In the spirit of holiday kindness, we have a three-way tie for this week's Bright Sider award - pece, haremoor, and Mike Lisboa (our first two-time winner) all take home the (non-existant) trophy for their awesome respective contributions in the past week:

1. pece: for translating a fantastic recent interview Goran Dragic had with Slovenian magazine. pece does a phenomenal job of consistently sharing things that the rest of us Bright Siders wouldn't find otherwise. Thank you, pece!

2. haremoor: resident optimist delivered an awesome holiday poem on the night before Christmas...aptly titled, "Twas the Night Before (Dionte) Christmas..." Thank you, haremoor!

3. Mike Lisboa: Mike also spread the Christmas spirit by leaving a gift under the Bright Side Christmas tree in the form of his own Suns-styled "Night Before Christmas" poem. And it was fantastic. Thank you, Mike!

Any other news you'd like to share? Any suggestions for what else you'd like me to do/include in these weekly segments (I'm open to anything!)? As always, feel free to discuss below.