This week I take a look at the Phoenix Suns fairly understandable defensive issues and the fairly undecipherable opinion some people seem to have about Kevin Love.

After issuing some encomiums to the entire Suns' squad for their improvement across the board in the last installment I'm feeling a little more irascible this week and have decided to take on the role of the pugnacious little troll voice of reason on a couple of subjects.  First off...

While the Suns' offense has been surging, their defense has been struggling somewhat. Dave King recently detailed some of these issues, with particular emphasis on second chance points and points in the paint disparities.

But here's the issue with picking on a team on one side of the ball.  Only really good teams, mostly title contenders, tend to be upper echelon on both sides of the ball. 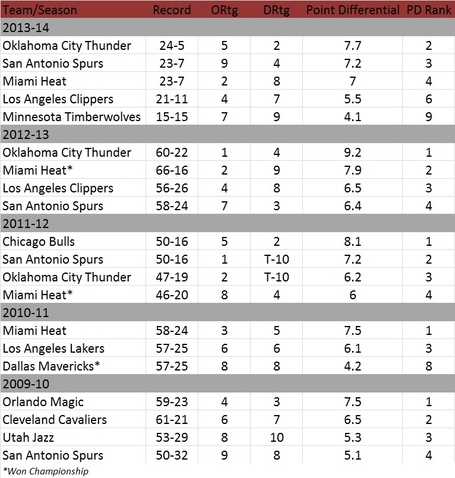 The above chart is a list of all teams in the top 10 in both offensive and defensive rating over the past five years (including the current year).  You'll notice that all of these teams have excellent records and turgid point differentials.  In fact, three of the previous four seasons saw the top four teams in point differential as the only four teams in the top 10 in both ratings.

The biggest outlier from the past four seasons was the Dallas Mavericks, who had the lowest point differential from those seasons... but won the title that year.  In fact, three of the previous four seasons both teams that made the Finals were on this list.  In 2009-10 the Lakers won the NBA championship while finishing just outside the top 10 (11) in ORtg and fourth in DRtg.

This season appears to be somewhat incommensurate with previous seasons, as the Indiana Pacers are first in point differential despite having an exiguous (19) ORtg.  That is due to the scoring discrepancy being bolstered by what is far and away the best defense in the NBA.  Also interesting is that the Timberwolves have managed to crack this list despite being a .500 team thus far.  It is always possible that their record will improve or the rankings will drop over the remainder of the season.

What all of this evidence suggests to me is that until the Suns are back to competing for a title it is completely expected that they have weaknesses.  The worse a team is the more glaring those weaknesses tend to be... but even teams with title aspirations are not without flaws.  While system and coaching influence a team's ability to improve in areas, talent is the ultimate trump card.

Look at it this way.  If the Suns eliminated the -3.3 second chance point differential Dave noted (in a vacuum) that would up their overall point differential (currently +2.6) to +5.9 points per game.  That would put them in a virtual tie with Portland for fifth.  The Suns would become a virtual statistical title contender. But team's don't improve in a vacuum. Usually improvement in one area comes at the expense of performance in another.  If the Suns focus on defensive rebounding what does that do to fast break points?  It's a simple ripple effect dynamic.

Teams just have failings (the Heat lack size for instance) and the best ways to address them is through coaching and talent acquisition.  To be cognizant of these failings, and to attempt to improve or eliminate them, is prudent, but to be overly captious of them seems counterproductive.

What is nice, though, is to be able to pinpoint specific areas that need improvement this season as opposed to just dealing with sucking at pretty damn much everything last season.

Now for something that I wanted to discuss that as a byproduct delivers some shameless self-promotion (because that's how I roll).  By using the tags of Phoenix Suns and Kevin Love I can try to drive kitten and car chase hits to my story.  I will preface this discourse by emphasizing that I have no idea whatsoever whether this possibility is even remotely possible or completely unfounded.  I did, however, skim through some conversation on this topic on the site over the last couple days (on top of the woolgathering on the subject for years) and was perturbed at a few viewpoints... at least enough so that I decided to address them.

There was discussion of A) people that felt that Kevin Love was bad enough defensively that it didn't make up for his offensive production and B) that the Suns shouldn't give up too much for him... e.g. Goran Dragic and Eric Bledsoe should be untouchable.

IF Kevin Love is or becomes available AND the Phoenix Suns did acquire him it wouldn't just be some kind of happy circumstance... it's THE PLAN.  Bringing in a star talent to build a championship contender around has been the mission statement of the (wildly heralded) front office.  This is why they've been acquiring assets.  For this.

It seems rather humorous to me that some appear to heckle a player who is easily at the very top of the NBA pantheon.

It almost seems like a pattern is starting to develop...

But Love can't help stretch the floor the way the Suns like to play.  No, because he's only 11th among big men in three point % (.386) and number one among bigs in the league in three point makes... and still manages to gobble up all those offensive boards while floating around the three point line.

Love is averaging 26.1 points and 13.8 rebounds per game.  If he can sustain those gaudy numbers it would be the second time he has averaged 26+ points and 13+ rebounds for a season (previously 2011-12).  Prior to Love's achievement this feat had only been accomplished three times since the 1981-82 season - once by Hakeem Olajuwon and twice by Shaquille O'Neal.

Love, who just turned 25 before the season, has appeared in two all-star games and made one second team All-NBA.  In all likelihood he would have one more of each without an injury last season and will add to each total this season.  If the Suns were able to acquire and extend him they would lock him up through the prime of his career.

Who is even in Love's class at his position?  LaMarcus Aldridge?  Blake Griffin?

But there will always be those who find flaws.  After all, just look at the players who made All-NBA teams last season...  Maybe none of them meet the Phoenix Sun standard.

Kobe Bryant - old and a Laker

Tim Duncan - old and a Spur

LeBron James - the decision and not one, not two...

Tony Parker - old and a Spur

Paul George - why is his team an offensive mess...

James Harden - maybe... but that beard

David Lee - no substance to his stats

So... maybe a couple of these guys meet the Suns standard.  The high standard set by the likes of Goran Dragic, Eric Bledsoe and Miles Plumlee.  After all, the Suns shouldn't "gut" their roster by trading away pieces that have a combined zero all-star appearances for perennial all-star all-NBA top five-ten NBA talents, right?  Or maybe it's just because fans tend to overvalue their own assets, sometimes to a ridiculous degree, and undervalue those of other teams... Until they become their own team's assets.  Then they start to overvalue them.

It would take a nearly impossible package for me to not pull the trigger on Love if he becomes available.  If Minnesota wants to swap Barea for Dragic or Bledsoe in the deal I do it.  If they want Len or Goodwin... or both... I do it.  Draft picks?  Which ones do you like?  The Morrii?  Yep, they would be a good replacement for some of Kevin's minutes. Cap relief?  We've got an expiring.  Maybe it wouldn't be every single one of these areas, but absolutely everything would be on the table for me entering the discussion.  Unless McDonough sees these guys as best case better than top 10 players why wouldn't he? Kevin Love is already the best case scenario for what any of those guys could possibly develop into.

After the Suns lost out on James Harden, which they had been involved in talks with OKC about but lacked the ammunition, they went about getting firepower so that if another opportunity presented itself they would be poised to strike.  If Kevin Love became available that would be exactly the type of situation they were/are preparing for.

So find flaws if you like... I'm admiring what I hope could be the realization of the plan.