After everyone and their sister predicted the Suns would bottom out this season, we're all being forced to accept the Suns as they really are: winners. Playoff caliber. Able to beat a Finals hopeful by 19 on their own court.

The year started with some of the darkest days in Phoenix Suns history, but it ended with a dominating 19-point win over the 21-12 Clippers IN LOS ANGELES!

"They just kept pushing it at us," [All-Star Chris] Paul said. "I don't think they caught us off guard. We knew how they were going to play. They hit us in the mouth early, and they just dominated us through and through. Luckily it only counts as one loss."

"This is a tough one for us," Paul said after the game. "It might have been one of the worst ones since I've been here."

After blasting the Clippers, the Phoenix Suns are now 19-11 on the season, with a robust 8-7 road record and a 6-5 record against the West's other 7 playoff seeds. Home court has become a haven again, with a whopping 11-4 record in front of their fans. The only two West playoff teams the Suns have not yet beaten are Oklahoma City and San Antonio, though the Suns went into the final minutes against both of them with a chance to win.

We're all a bit flabbergasted with what's happened in Phoenix this year. It's like all the good karma from the past three years was locked in a basement storeroom of US Airways Arena until a 33-year old aspiring Exec of the Year stumbled on the door, thought "hmmm, I wonder what's in here" and forced the door open.

BOOM! Three years' worth of good feelings have washed over the arena, taking the entire franchise for a ride.

Let's do a rewind, and go back to what some people had to say about the Suns as recently as October:

Bill [Simmons, on Grantland's preseason 'League Pass Watchability' rankings]: If I watch more than 75 total minutes of the Suns this season, I'm gonna feel like I failed. Congratulations, Robert Sarver - you did it again.

Zach [Lowe]: Ouch. But Eric Bledsoe is going to get starter minutes! And Jeff Hornacek is going to have them run! And they have that horrible court redesign that makes them look like they are permanently playing on Halloween!

Bill: Your love for horrible court redesigns almost rivals your love for Swin Cash and mascots. For the record, I watched Bledsoe up close for three years at Clippers games. Phenomenal athlete, destructive defender, great energy guy off the bench ... and if you're turning your offense over to him, in the words of Baby Doll Dixon, "I wish you a lot of luck."

Well, Bill watched 48 minutes of Suns basketball last night alone so he must have failed at something. Maybe where he failed was ignoring the concept that a young team running up and down the court HAD to be more interesting than half the NBA even if they'd gone 20-62.

Simmons has been quietly silent (I'm a wordsmith, can't you tell?) on the Suns turnaround, likely after having lunch with Chad Ford recently where they decided to skulk in the shadows until the Suns finally collapse so they could jump back out and shout triumphantly "I told you so!"

Last night he was forced to give a tiny nod in the Suns' direction:

Remember though, that this feel-good crap regarding the Suns has been relegated to a 140-character-limit medium. This from a guy who can write 4,000 words on what's going through his head on any given day without a single hand-cramp. But hey, it's a start.

ESPN gave the Suns 21 wins in a number of ways: 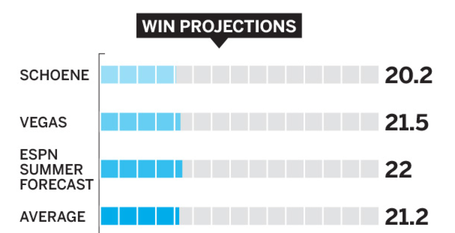 In fact, the most bullish national media dude on the Suns in the preseason was Matt Moore of Hardwood Paroxysm and CBSSports.com. He liked what he saw in the summer and preseason and predicted an exciting team to watch. Yet he still predicted tons of losses.

But at least I said the Suns would be fun to watch, and that Bledsoe and Dragic could play well together, and that I really, really liked what Hornacek and Longabardi could bring to the team. Click the link for proof.

How did many of us see the positive signs over the summer, yet still predict doom and gloom?

For one, I claim being caught up in "the plan". Clearly, the Suns had planned to tank the season for a top pick in 2014.

They told their most talented acquisition - Emeka Okafor - to go home and rehab his neck injury on his own time.

In the process, the Suns had lined themselves up with 6 first round picks over the next two Drafts, making no bones about the fact that every deal was centered on future prospects and youth, not established talent.

I thought I was doing the Suns a favor by predicting no better than a 25-57 record. I ignored the optimists who said the guys who'd gone 7-1 in Summer League and 5-2 in preseason couldn't possibly be that bad.

I told myself that the more I liked McD and Hornacek and the staff, the more I bought into the 60-loss "plan" rather than buying into a potential 60-win season.

I somehow told myself the Suns would be fun to watch, but would manage to lose anyway. The perfect storm would be competitive losses all season long, like Orlando had done a year ago to get the #2 pick this spring. I completely ignored any potential for a strong playoff run.

Because how in the world could Miles Plumlee (55 total NBA minutes before this season), Eric Bledsoe (never played more than 22 minutes a game), Gerald Green (out of the LEAGUE three years ago), Channing Frye (lucky to be alive), and Goran Dragic (his best NBA moment had occurred in 2010!) lead the Suns to the promised land of a playoff run? How???

Now, I'm discombobulated. As much as I want to blast guys like Simmons, Ford, Stein and all the others that went on laughing at the Suns and predicting doom and gloom even after the hot start, I realize I was one of them. Sure, I didn't laugh outright. And I didn't say stupid things that would come back to haunt me.

But I did predict a terrible record.

My bad, Suns. Please forgive me.

For my New Year's Resolution, I promise to try harder not to sell this team short. That doesn't mean I am putting on purple-colored glasses and ignoring their faults. I won't do that. I'll still call it like I see it.

But my ceiling for this team in 2013-14 is now the Western Conference Finals. A long shot, to be sure, but if they can keep this energy and style going no one will want to face them in the playoffs.

There may not be an All-Star in the bunch, but damn are they coached well and fun to watch. We might not get any All-Stars, but many other awards could go the Suns way: Coach of the Year (Hornacek), Executive of the Year (McDonough), Most Improved Player (any of 3-4 guys), Sixth Man of the Year (Green or one of the Morrii) to name a few.

So, even though I sat at the same table as Stein, Moore and Simmons in the preseason, I can pull out my 30-year old fan card and say "Eat it, you idiots!" (and then take a bite of humble pie myself).