The Phoenix Suns come into Houston reeling from a tough loss to Memphis and a recent penchant for porous defense, while Houston comes in smarting from a loss to Utah two nights after the Suns suffered the same result.

A night after getting pummeled in the second half by a Memphis team missing their best offensive players (plural, that was), the Phoenix Suns try to slow down the league's #1 offense.

The Houston Rockets are a two-headed demon, flanked by prolific three-point shooting around the center of the sun called Dwight Howard. Their offense is great in almost every way - top three in ten offensive categories.

In close, out far and anywhere in between. And as I mentioned last week, the Rockets set the league standard for efficiency on offense.

The Suns defense has been terrible the last few games and the Rockets' offense is the best in the league. Bad combo.

It's not just that the Suns have given up 100+ points in 7 of their last 9 games, or that each of their last four opponents have scored 100+.

It's that three of those games were against two of the league's worst offenses. Utah came in 2-12, scoring only 91 points per game but hung 101 and 112 on the Suns. Memphis came in only scoring 93 a game, but dropped a smooth 110 on the Suns last night without even the services of Marc Gasol and Zach Randolph.

Can the Suns pull themselves out of another hole? They started the season 5-2 by playing quality defense, then lost four straight, then went 4-1 before losing these last two games. 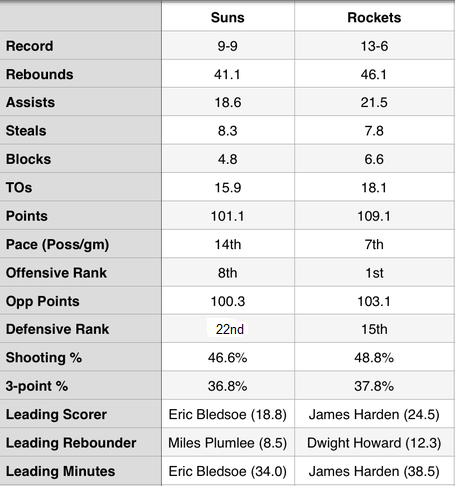 In the span of a week, the Suns have dropped from 8th in the league on defense to 22nd. Ugh.

The Suns have Eric Bledsoe back, while the Rockets are missing their starting PG in Jeremy Lin. Patrick Beverly plays better defense but doesn't play much offense. It's possible the Suns don't lose the PG matchup in this game. The Suns could also win the PF matchup. Where the Suns will struggle is the other positions: SG, SF and C.

If the Suns are going to win this game, then the matchup between Goran Dragic and James Harden has to be a toss up. Dragic will have to match Harden's prolific game, which will require Dragic to stay out of foul trouble.

Elsewhere, the C matchup will be very tough for the Suns to combat, with the Rockets now boasting the beast Dwight Howard. You could go small, potentially, and play Channing Frye at center for offensive possibilities by drawing Howard out of the lane. But defensively, the Suns would be toast.

Sorry guys and gals, but I see the Rockets running away with this one.

The only way I see this game becoming a Suns win is to frustrate Howard into playing aggressively but poorly on offense, and to force the Rockets off the three-point line. Despite the defensive decline, the Suns still have given up the third-fewest three-point attempts and makes in the league. Keep the Rockets off the threes and get Dwight into foul trouble and maybe the Suns can win this thing.