The Phoenix Suns travelling contingent visited St. Jude's Children Research Hospital in Memphis, TN on Monday December 2nd while in town for a matchup against the Grizzlies the following day.

One of the benefits (and I do see it as a windfall) of being a professional athlete is the advantage of possessing more resources than most do to use in helping others.  From the benefits of affluence to the investment of something as simple as time, athletes are in a uniquely serendipitous position to bring joy to other people's lives. Professional sports organizations, more specifically the NBA, and most specifically the Phoenix Suns are also thoroughly committed to making a concerted effort to help others.

Everyone in Phoenix knows about the organization's continued effort to give back and build the community. From Suns in the Community to Phoenix Suns Charities, to local hospital visits and involvement in a number of other community programs the Suns are firmly entrenched in people's lives in the Valley.  But were you aware of the assiduity of the team in giving back at every opportunity, even on an off day on a road trip?

The Suns dropped by St. Jude's Children Research Hospital as part of the Hoops for St. Jude campaign, a partnership between NBA Cares and St. Jude.  The hospital treats children with cancer and other catastrophic diseases, but unlike other hospitals that only provide treatment for children it is also a research facility that has made great advances in contributing to pediatric cancer survival rates in the U.S.

The Memphis Grizzlies are also involved with the hospital and helped build a short term stay facility, aptly named the Memphis Grizzlies House, that can house up to 100 families a night while children receive care at the hospital. Check on St. Jude's page for more information about their mission and ways to help. Residents of Phoenix are probably familiar with PCH, Phoenix Children's Hospital, which is a huge part of our community like St. Jude's is to Memphis.

I would like to assert that trips like these do make a difference and leave a mark, as I was personally visited by the Gorilla in a Phoenix hospital as a five year old after sustaining a knee injury that had doctors concerned I might lose my leg.

As shown in the photo, all the Suns' horsemen and all the Suns' men were in attendance.  Of course, this included starting power forward Channing Frye.

"It's huge," said Frye.  "I think any time you look at the opportunity we have to play basketball and the chance we have to give back I think it's a great chance for us to give back to kids.  When kids are sick it just kills you.  When you have kids you never want to see them hurt or injured.  We're just appreciative of this great organization that gives us a chance to give back and see those kids."

Channing is speaking from firsthand experience as his daughter was born with cataracts in both eyes and has gone through care that has partially restored her vision.

But Frye was just a small part of a large group.  Here is coach Jeff Hornacek teaching some kids the finer points of the pick and roll and the value of the corner three.  They all appear to be picking up on it rather quickly, too.  I don't see any of these future all-stars missing defensive rotations. 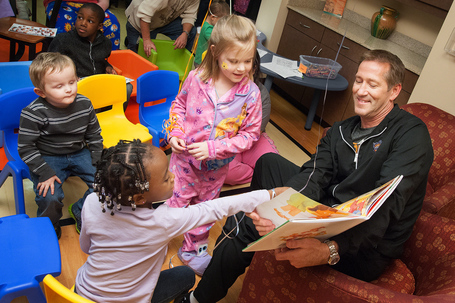 I encourage everyone to find a way to give back as we head into the holidays... and beyond. Being around the Suns organization, I can tell you these guys really do go out of their way to help in any way they can.  But everyone can make a difference.  I have always liked the aphorism, "I may not be able to do great things, but I can do small things in a great way."  Well, even all of those small things add up and sometimes they're really not small at all.