Jonah Zahn, A Phoenix Sun For A Day, Living A Real Life Wish

There are different ways to score points and get into the win column. On the basketball court it is about offense and defense, in life it is about experiences and moments given to others to make their days just that much better.

Share All sharing options for: Jonah Zahn, A Phoenix Sun For A Day, Living A Real Life Wish

This is one of those moments as the Phoenix Suns took time out of their day yesterday to welcome in a kid from halfway across the country and, for a day, treated him like one of their own.

As young Jonah Zahm walked in the land of giants that is the NBA for a day, he was the one with the most heart and courage. It takes a special kind of courage to battle Von Willebrand'd Disease everyday at his age than it does to take a full speed charge from LeBron James or have the ball in your hands in a tie game down the stretch.

In the end those are factors of a game.

On the surface he is like any other shy young 12 year old boy out of his element on an NBA practice court. He didn't blend in with the trees all over the court, however humbled them as he shot (and made) jumpers with them, leading huddles, and interacting with them.

"He has a nice little jumper," said Interim Head Coach Lindsey Hunter. "I talked about him playing."

Jonah had a simple description for all of this, "They are so much taller than me."

He came all the way from Illinois to become a Sun for a day, but build memories for life with these real life giants.

The Make-a-Wish foundation made this happen for Jonah as they have for many kids in the past. All the Phoenix Suns had to do was welcome in Jonah, as they did with open arms. From signing a contract, getting a jersey in the same press conference room that rookies and newcomers are welcomed in, to practicing with the team, today was about memories.

"We were just sharing some Mid-West stories," said Hunter about his time with Jonah.

"He is from Illinois and I lived there the past 20 some odd years. It is always great to share, especially being in the industry we are in. When you can share with a kid like that it means the world to them. I told him I never met a pro athlete when I was a kid so for him to come here and live out one of his dreams was awesome."

That it was as Lance Blanks began the day giving Jonah his jersey. 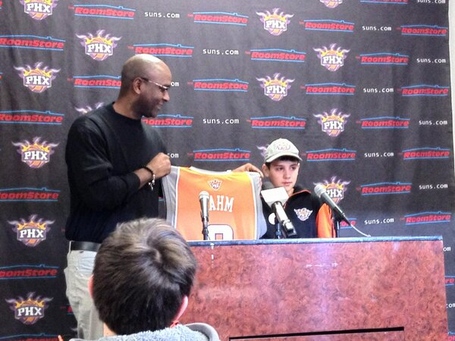 He was given his own locker next to Goran Dragic who conveniently had a free space available for him with his double-locker. After that he went to the court where he met the team. When practice was over Michael Beasley took the practice ball and made the executive decision that Jonah deserved an authentic NBA ball, not a generic autograph ball. The team signed it and presented it to Jonah at the end. 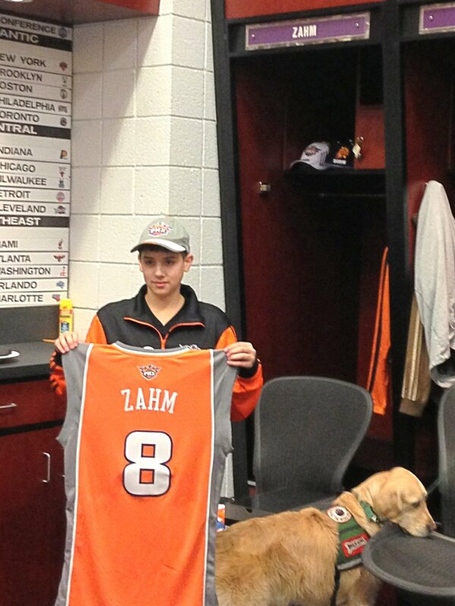 "My dad likes them and so I just caught on, now they are my favorite team," said Jonah about his love for the team. "Channing Frye is my favorite, but he is hurt though. I like everybody, but him especially."

A jersey, a contract, a locker, and practice made Jonah a Sun for a day. Getting paid would have made that more official, right Jonah, "that would be nice."?

What gravitated Jonah to the Suns, despite being in Illinois, was his dad, a longtime fan. He picked up while watching his dad watch the team and grew a connection to the team, Channing Frye in particular.

He is excited to get home and share this experience with his friends, family, and a select few. "My grandpa and my grandma at home. And my youth pastor," stated Jonah on who back home he wants to share this with. "Me and him are friends. I will talk to him about it. We are buying souvenirs for people too."

Jonah finished his day off at the game, which was not the ending the team would have hoped for, but the edge had to be taken off with the presence of their Sun for a Day, Jonah Zahm.