Let's take a break from all this rosterbation and rumor to look at some real, actual, on-court basketball. Because who doesn't love to see Kobe Bryant fail miserably? P.J. TUCKER FTW!

Share All sharing options for: Suns' P.J. Tucker shows his worth, shuts down Lakers' Kobe Bryant

Phoenix Suns forward P.J. Tucker isn't blessed with prototypical height or length for an NBA wing, nor is he the most athletic player in the league. He doesn't have the quickest of feet and he can't jump out of the gym. Generally, undersized, sub-par athletes don't tend to stick around very long in the NBA. Yet here Tucker is, starting for the Suns and playing big minutes.

Tucker has made it back to the NBA after a detour overseas through hard work. He wasn't good enough to be the star he was at Texas, so he reinvented his game to become something else. Tucker has turned himself into a hard-nosed defensive player, and a darn good one at that.

In the Suns' last game against the Los Angeles Lakers, Tucker showed what makes him valuable by doing something very few NBA players have ever been able to do: he shut down Kobe Bryant.

To be fair, Bryant helped out Tucker a lot by not even trying to shoot in the first half. The Suns sent a lot of double-teams early to get the ball out of Bryant's hands, and he was gracious enough to comply with the Suns' game plan and look to pass the ball. And it was working for him as the Lakers controlled the game throughout the first half. Kobe was all smiles at halftime.

But then something changed. The Suns fought their way back into the game, and Kobe wasn't smiling any more. He finally started shooting. But just because he was shooting doesn't mean he was scoring. No, Tucker made sure of that.

Bryant finished the game 1-8 from the field and 2-2 from the free throw line for four points, and had eight turnovers to go with his nine assists. Watching all of those plays on MySynergySports.com, Bryant went 0-5, was fouled on one shot and committed six turnovers against Tucker's defense. How did Tucker shut down one of the best scorers in NBA history? Let's take a look. 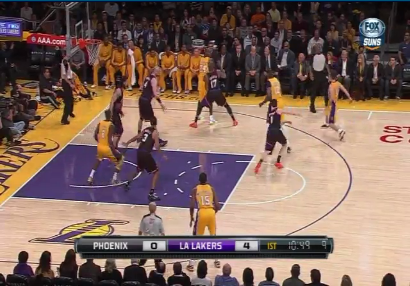 Here we see Kobe getting the ball on the right side of the court. P.J. was right up in his face before the catch and doesn't back down once Kobe gets the ball. 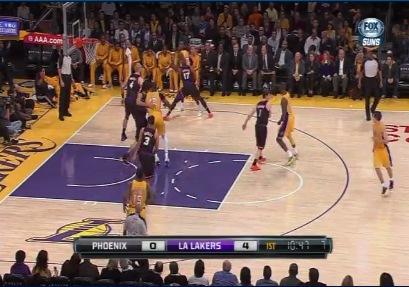 Kobe surveys the floor, but P.J. is right up in his grill, getting his hand in front of the ball and in Bryant's face, looking to deny the pass. Tucker is not going to give Bryant anything easy on this play. As you can see, he's playing tight on Kobe's left hand and giving him the baseline. 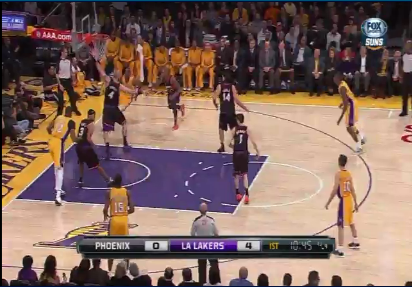 Kobe blows by Tucker and drives baseline ... right into the waiting help defense of Marcin Gortat. Bryant left his feet to try to make a pass and got caught in the air before throwing it off the feet of Dwight Howard. 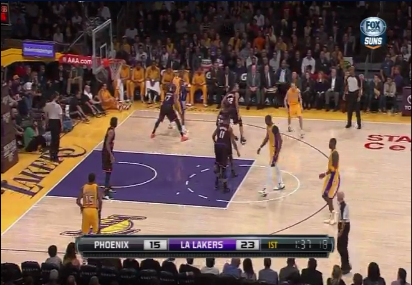 This play starts the same as the first one, with Kobe getting the ball on the right side of the court and Tucker right on him. 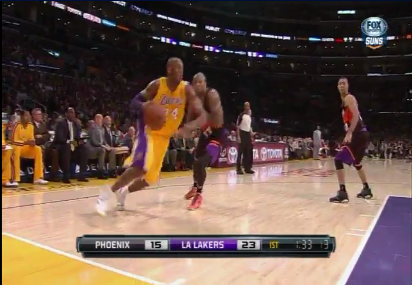 Kobe gets past Tucker and drives baseline again, but this time there is no help defense waiting at the basket. 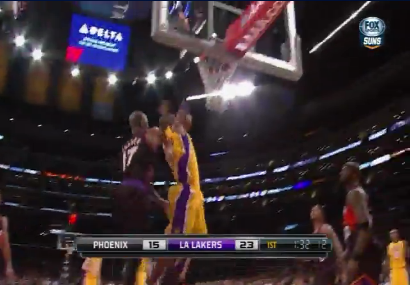 Instead of giving up on the play, Tucker chases him down and hacks the heck out of him to prevent the dunk. With no help defense, Tucker made the wrong play by pressuring Kobe so tight and giving him the baseline (it's tough to tell from the angle given on Synergy, but it looks like Jermaine O'Neal might have had to time to get over and help but didn't even move). 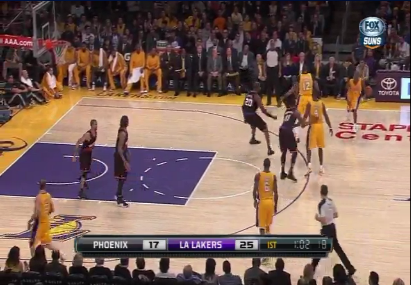 This time, Bryant brings the ball up the court and Tucker meets him a step outside the arc. Both Howard and Antawn Jamison come up to set screens. 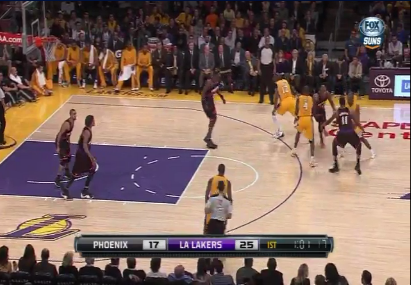 Tucker fights through and gets over both screens, while Markieff Morris steps out to hedge on the second one. 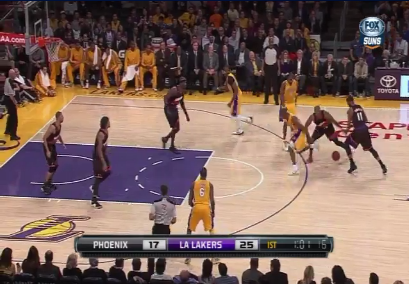 Kobe tries to split the trap off the screen, but Tucker and Morris don't give him room and he dribbles off Tucker's foot. 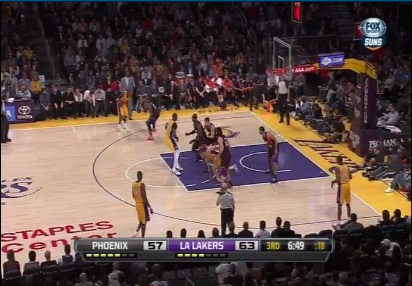 On this play, Steve Nash passes the ball off to Kobe on the left wing, and Tucker is right up on him. 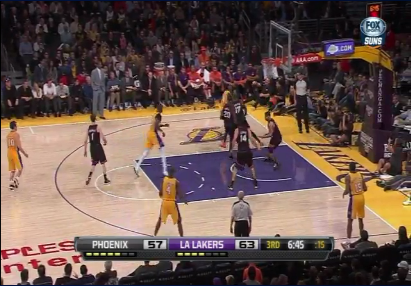 Kobe tries to take P.J. off the dribble and drives left, but Tucker does an excellent job of moving his feet and staying in front of him. Bryant picks up the ball and has nowhere to go, but for some reason O'Neal comes over to double. That leaves a free lane for Howard to roll to the basket. But as you can see, Jared Dudley is in excellent position to rotate over. 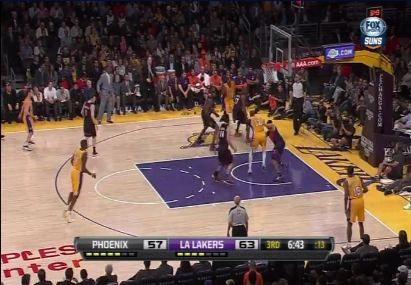 Bryant sees Howard open at the rim and tries to pass to him, but Dudley steps in front and knocks the ball away.

This next play is a Shannon Brown special. Kobe brings the ball down the court and isolates on Tucker at the top of the key. 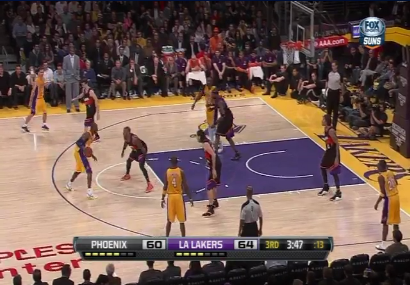 After a lot of dribbling in place, Kobe rises up for a 19-foot jumper, and Tucker is right up in his face contesting the shot. Clank. 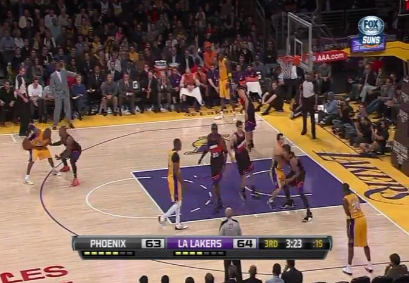 Kobe isos on Tucker again, but this time he attacks the defense. 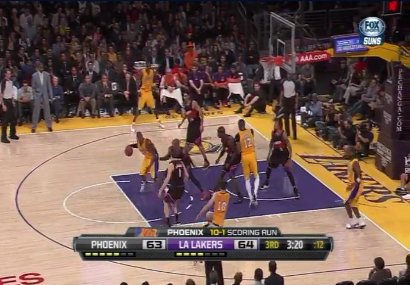 Kobe drives, but Tucker stops him. Kobe crosses over and tries to drive again, but Tucker is still there. Kobe spins back ... 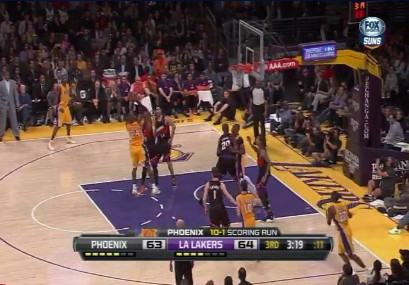 Then turns back around for the fadeaway jumper. The only problem (for him) is Tucker didn't fall for the spin and is right in his face, giving him no room to get a good shot off. Airball.

Bryant starts out off the ball, but Tucker doesn't relax. Kobe cuts baseline but Tucker is right there fighting him every step of the way. Kobe looks to get position on the block as Tucker fronts him hard. 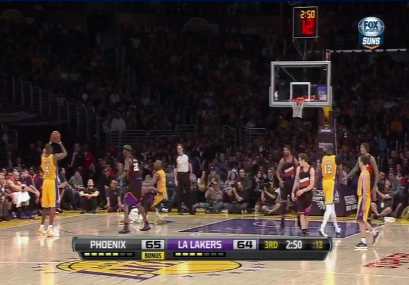 Bryant puts a forearm into Tucker's back to create space (not legal, but not called) and Jamison tries to make the pass. But the pass sails and Kobe falls out of bounds trying to bring it down. 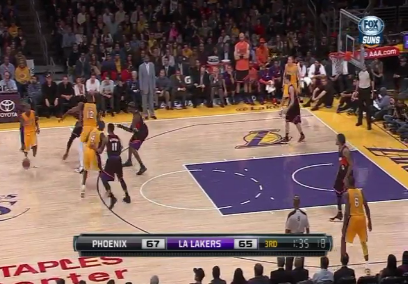 This time, Kobe's back on the ball. Howard and Jamison set high ball screens again. Just like the first time, Tucker gets through the screens and Morris hedges to give him time to recover. Kobe isos and tries to take Tucker off the dribble ... 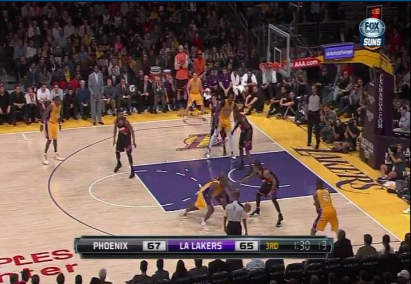 But Tucker gets his hand on the ball and knocks it loose.

On this play, Bryant brings the ball down the court and Tucker gets picked off by Howard, giving Bryant space to rise up for the 3-pointer. 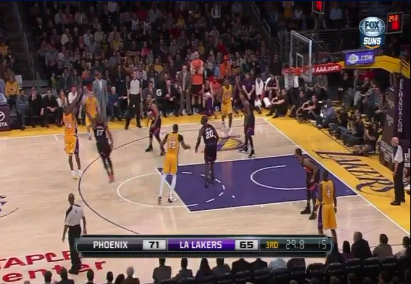 Tucker does a good job of getting around the screen and closing out to contest the shot. This was still one of Kobe's easiest looks of the game, but Tucker didn't give up on the play. And as cold as Bryant was, no bucket. 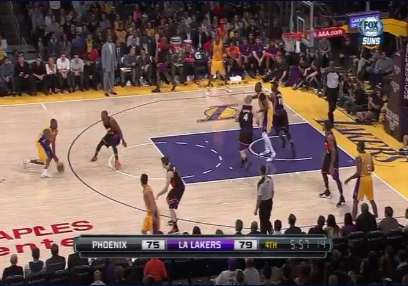 Nash passes the ball to Bryant at the top of the key, and on the catch Bryant tries to attack. 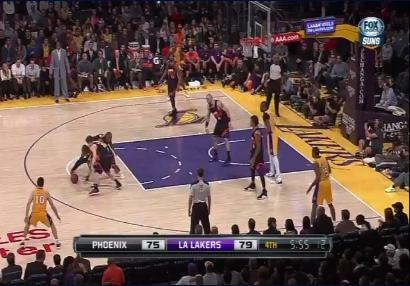 He tries to cross Tucker over, but never really has control of the ball and Tucker gets a hand on it. The ball is knocked around a little bit but somehow ends up back in Nash's hands. 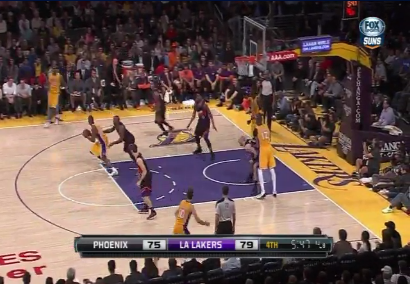 Nash gets it right back to Kobe and he tries to drive again, but Tucker cuts him off. Kobe tries his reverse pivot/spin move thing again ... 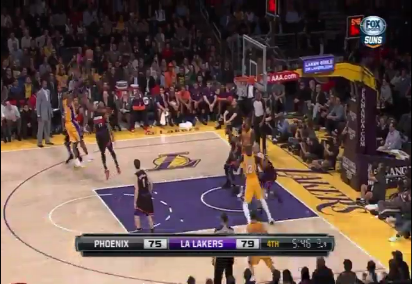 And again Tucker is right in his grill on the release and again it's an airball.

This next play is in transition as Bryant pushes the ball up the court. 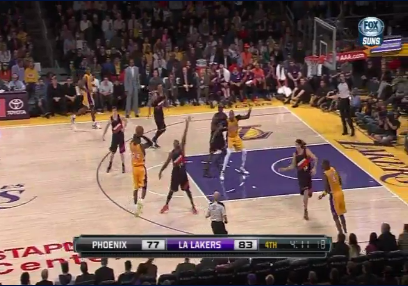 Tucker gets back and meets him at the 3-point line. Howard has position down low, and Bryant leaves his feet in order to make the pass. For some reason known only to Bryant (perhaps Tucker's upraised arm was in his passing lane?) he decides - while in the air - not to let the pass go to Howard and tries to get rid of it to Jamison in the corner before he comes back down. 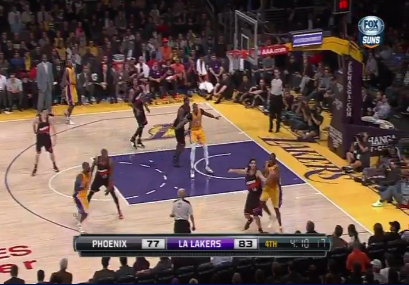 But Luis Scola is close enough get a hand on the ball and knock it out of bounds off of Jamison. Meanwhile, Howard still has O'Neal sealed under the basket. Never leave your feet to make a pass kids (unless you're Steve Nash).

Tucker spent much of the game face-guarding Bryant and sticking tight to him, but on this play he gives him a bit of room. 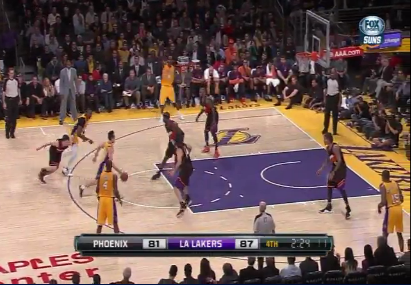 Nash runs the high pick-and-roll with Howard and penetrates into the lane, collapsing the defense a bit. Tucker drops down into help position leaving Bryant open at the arc. 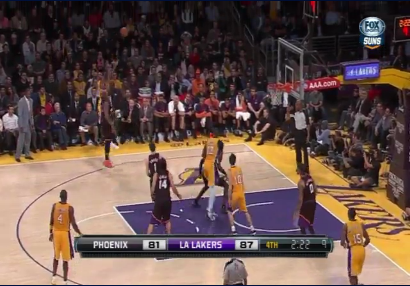 Nash hits Bryant for the pot-up 3, but as cold as he was even the open ones wouldn't go in. And Tucker still did an excellent job of closing out and contesting the shot.

Tucker was able to be so successful defensively because he never took a play off. He played with intensity on every possession, getting up in Bryant's face an cranking up the pressure. He moved his feet well, read Bryant's moves and overall played very fundamentally sound defense. This is who P.J. Tucker is. He's the Garbage Man, putting in a long day of hard work and doing all the dirty work. He's not and never will be a big time scorer, but Tucker's defense should keep him in the NBA for a bit longer this time around.