Next Starts Soon? Phoenix Suns Salary Cap Status - this season and next

Now that the trade deadline is past, the Phoenix Suns roster is basically set for the remainder of the season. Let's take a look at what that means now and in the future.

Share All sharing options for: Next Starts Soon? Phoenix Suns Salary Cap Status - this season and next

Everyone's going to talk about the rotation now, which is a mishmash of disparate parts to be sure.

The Suns now have too many of the same kind of player, so basically its just up to head coach Lindsey Hunter to give people trials. That means playing some guys for a week or two, then moving onto someone else.

You can't look at today's roster (below) and project the same minutes for guys in each game the rest of the year. It's going to be a moving target on the lineup each night.

Notice I used the term 'wing' because I believe the wings are interchangeable, depending on who's on the floor together. They can switch on defense to match the opposition.

In fact, on the whole roster, there's only 3 guys (Kendall Marshall, Marcin Gortat, Hamed Haddadi) who can only really play one position, but even that gets muddled. O'Neal and Gortat have played time together - who knows who the center is at that point.

But everyone else can switch around: Goran Dragic and Diante Garrett can be PG or SG, all the wings can be either SG or SF, Marcus Morris and Michael Beasley can both be SF or PF, and Luis Scola and Markieff Morris can be either PF or C.

That's what Hunter will have to do. Play 9 or 10 of the 14 guys each night, mixing and matching lineups for evaluation. I don't see anyone playing every single game from here on out. Even Dragic, Dudley and Gortat will be more and more likely to sit in the season's final weeks if Hunter really wants to see other guys.

The Suns have two first round picks, theirs and the Lakers (or maybe the Heat's), plus Denver's second round pick. That's likely a top-5 pick and a #14 pick, plus one in the 40s. 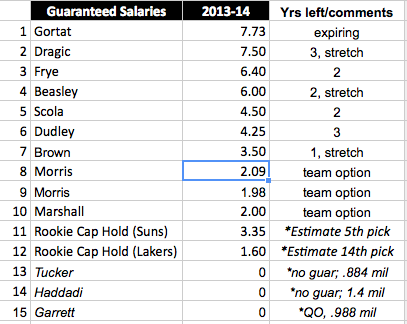 It adds up to:

They will have 12 players on guaranteed (or partially guaranteed) contracts for $50.9 million dollars.

As you can see, the Suns will have about $9 million to spend on free agents AFTER counting the rookie cap holds but before picking up the salaries of non-guaranteed players (P.J. Tucker, Hamed Haddadi) or qualifying offers (Diante Garrett). Marshall and Morris*2 have already been guaranteed for next season.

And, this does not include more trades of current players.

If the Suns release someone and use the 'stretch' provision, they can have more money available. In the right-hand column, I comment on remaining years and whether a player can be "stretched" if released.

The big "IF" here is Shannon Brown. Since he has not been moved or released, the figures above assume the Suns keep him on the roster. If they release him, his cap number drops by $3 million because they use the "stretch" provision to spread the $1.75 million guaranteed over 3 years instead of one. If they don't use the "stretch", then the cap hold is $1.75.

So, Brown is the difference between $9 million available and $12 million available. Expect the Suns to wait until the last possible moment to decide what to do here. Look at the roster: not a single other real SG besides Brown.

The other guys the Suns could "stretch" upon release are Goran Dragic or Michael Beasley. Every other player is either on a rookie or non-guaranteed contract, or was signed under the prior CBA which prohibits them from being "stretched".

That's where we are, fans.

You could make the case that adding a $9-12 salaried free agent PLUS two lottery picks to a supporting cast of Gortat, Dudley, Dragic and the others can propel this team right back into playoff consideration.

Or, you can say the Suns still have a LOT of work to do to change out those 12 returning players.