The Phoenix Suns point guard has five double-doubles in the last six games, and on the season he leads the Suns in scoring, assists and steals. But his shooting has been worse than expected, especially late in games.

As I've watched games lately, I get the impression that PG Goran Dragic is at his best in the first quarter.

Last night, he finished with an impressive double-double - his fifth such double-double in just six games since the All-Star break. But it's occurred to me that his stats are quite impressive in the first quarter, only to tail off the rest of the way (relatively speaking).

I realize this is nitpicking. Dragic has come out of the All-Star break a double-double machine. Marcin Gortat has expressed a great deal of appreciation for Dragic's extra efforts at setting up teammates, as have the rest of the team.

But it did make me wonder, so I did a little digging. 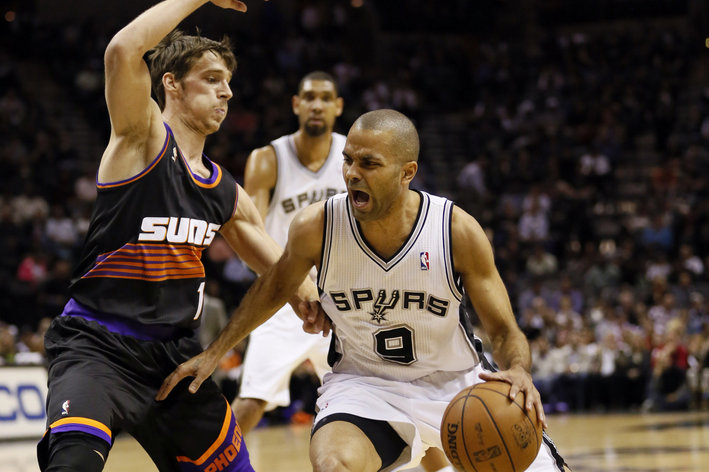 Dragic started hot and then faded.

And what I found made a whole lot of sense: Dragic's stat-heavy first quarter is very directly correlated with his minutes. He usually plays all or almost-all of the first quarter. His second-most minutes are in the 3rd, while the 4th and 2nd bring up a distant rear.

This makes total sense, doesn't it? That's how Nash's minutes were distributed too. But you might think that a 26-year old best-player-on-your-team might get more run in the 4th when you're trying to win games.

Anyhoo, here's some stats you might like to peruse to illustrate my comments (compared to all other starting guards in the NBA this season).

These stats compare Goran Dragic to the other STARTING GUARDS in the NBA.

These stats compare Goran Dragic to the other STARTING GUARDS in the NBA. This includes shooting guards as well as point guards, unfortunately, because the NBA stats tool does not allow me to limit the results only to PGs unless I try some fancy footwork. So, take these numbers with the knowledge that guys like Kobe Bryant, James Harden, Dwyane Wade and Joe Johnson are included in the rankings.

As you can see, Goran is 8th among all starting guards in minutes in the first quarter, then tails off dramatically in the later quarters compared to his peers.

He compares favorably on a per-minute basis all game long, as you can see he generally ranks higher in assists, steals and personal fouls drawn than his minutes would dictate.

Shooting is a problem

Where he falls off statistically throughout the game is shooting percentage, as you can see. In the first quarter, he shoots like we all want him to shoot: 52% on all field goals and 40% on 3s. But then he loses it. His next best shooting quarter is the third, but that's no great shakes. And he's been terrible in the second and fourth.

What's behind those discrepancies in shooting?

Well, part of it is the nature of an NBA basketball game. Nobody shoots as well in the second and fourth quarters as defenses ramp up and rotations mess with chemistry - his scoring in each quarter generally keeps pace with his peers per minute.

Another part might be fatigue. While Marcin Gortat has commented all season how tired he is from playing year-round, Goran Dragic has played a lot of international ball over the years as well. Dragic did take last summer off though.

Dragic has the weight of the team on his shoulders, and those shoulders aren't the widest or thickest.

Dragic has the weight of the team on his shoulders, and those shoulders aren't the widest or thickest. He shot much better in the fourth quarter last season (with Houston) when he was thrust into the starting lineup after the All-Star break. He shot 52% in the 4th (16th in the NBA among starting guards in 222 4th-quarter minutes) and 42% on 3s. That was after playing backup minutes for the first 40 games.

Either way, Goran Dragic is a darn good point guard. We can see it on the floor and in the stats.

Where he can improve is keeping up his shooting percentages later in games.