Forget about that game against New Orleans. That was sad. Let's relive that fourth quarter against Memphis instead. Y'know, the one where Goran Dragic went nuts. That was fun. Join me in my reminiscing.

Goran Dragic was having what can kindly be described as a forgettable game in Memphis on Tuesday. Through 3 quarters, Dragic had scored just two points. However, after a 17-point first half by Marcin Gortat, the Suns were still hanging around at the end of the third quarter, trailing 71-65.

The Suns started out well in the fourth quarter and cut the deficit in half at 77-74 with just under seven-and-a-half minutes remaining. At that point, the Dragon emerged, and much havoc did he wreak. The Suns' point guard scored or assisted on the next 20 points before a pair of Gortat free throws sealed a 96-90 victory. Let's take a look at how he pulled the run off.

Dragic actually got himself going on the defensive end, stealing the ball and taking it all the way to the basket for the first of his three and-one plays. 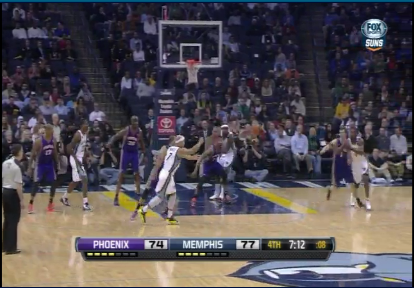 Above you can see Dragic reading the pass and breaking on the ball. He gets a hand in there, knocks the ball away, tracks it down and takes it down the court. 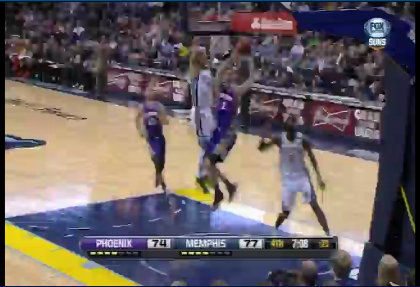 Dragic gets all the way to the basket, goes up for the layup, gets hit by Jerryd Bayless and still manages to finish the play. He sinks the free throw, and it's a whole new ball game.

This play didn't result in a bucket for the Suns, but it should have been an assist as Dragic created a wide-open look for Markieff Morris.

Kendall Marshall brings the ball down and passes it off to Morris near the top of the key. Morris gives it up to Dragic on the left wing, and he takes it to the rim, completely collapsing the defense. Dragic kicks it out to Morris for the wide-open 3-pointer, which unfortunately rims out.

Good play by Dragic, but the shot just didn't go down.

Memphis scored to retake the lead, but Dragic answered with his second three-point play on another tough layup.

Marshall again brings the ball down the court as Dragic sets up on the baseline. Dragic runs off a down screen and flashes to the top of the key, receiving the ball from Marshall. 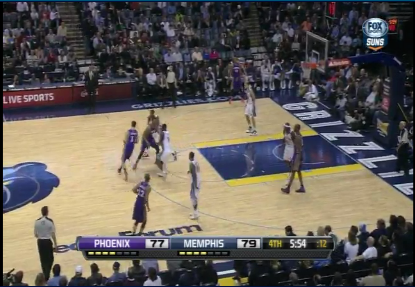 As soon as Dragic gets the ball, he looks to attack and runs off a screen by Morris. 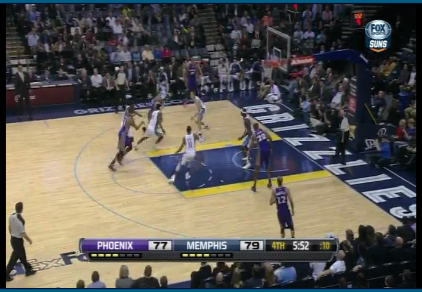 Memphis hedges the screen, but Dragic gets around it, past two more defenders and all the way into the paint. 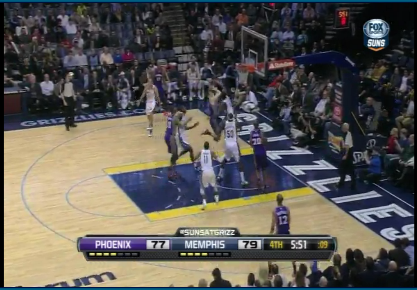 Dragic elevates and finishes through the contact, completing the 3-point play at the charity stripe and giving the Sun the lead.

Dragic created another open 3-pointer on this play, only this time Marshall was able to connect.

Marshall brings the ball down before giving it up to Dragic. Dragic runs a pick-and-roll with Gortat, and Memphis looks to trap him hard with both Conley and Zach Randolph jumping at him. 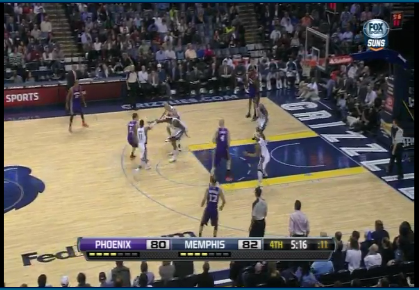 Gortat rolls right down the middle of the lane, forcing the weak side wing, Bayless, to leave Marshall and rotate over to Gortat. 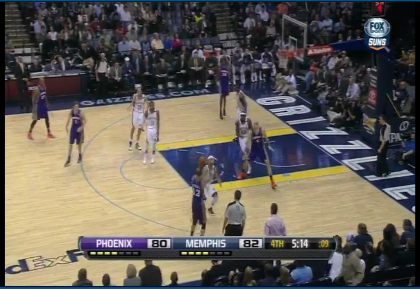 Dragic hits the wide-open Marshall on the wing, and he fires away before Bayless can recover and properly contest the shot. The ball goes down smooth as butter, and the Suns retake the lead.

Following a stop, the Suns are able to add onto their lead with Dragic's third and final and-one of the quarter.

Marshall brings the ball down and hands it off to Dragic on the right wing, where Gortat comes up to set a screen. 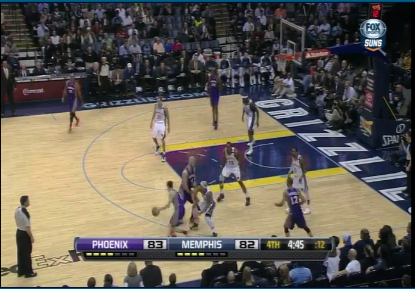 Dragic attacks off the solid Gortat screen, forcing the switch. 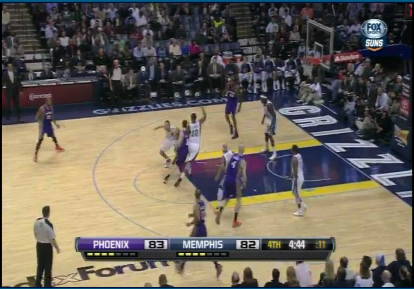 Dragic takes it strong into the paint, and draws the reach-in by Tayshaun Prince and the bump by Darrell Arthur (foul charged to Prince). 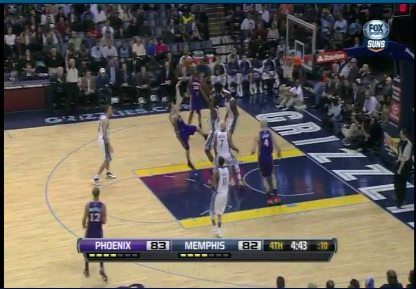 Dragic bounces off the contact but is strong enough to maintain his balance and get a shot off, which he made. The continuation was awarded and he finished the play at the free-throw line.

This play was a near miss, as Dragic beat his man but Marshall missed him. 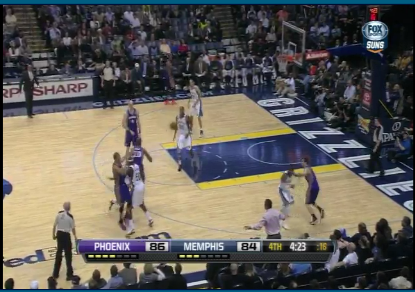 Marshall runs a high pick-and-roll with Dragic in the strong side corner. Dragic steps toward the ball, then cuts backdoor, fooling his man and getting a step on him. Unfortunately, Randolph jumped at Marshall and he got a little excited, passing too soon and way off target for a turnover.

Dragic loves the spin move, and he used it on this play masterfully to get Jermaine O'Neal an easy dunk.

Dragic pushed the ball up the court in transition as he is wont to do, and although he didn't have numbers he apparently didn't feel like he needed them and kept attacking the basket. 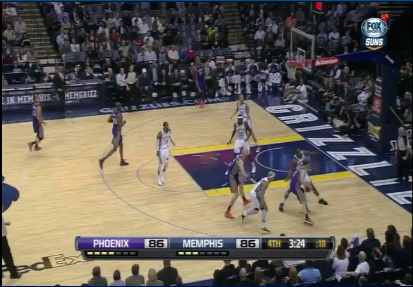 Arthur appears to cut off his path to the basket, but it takes more than that to stop a Dragon. He spins back to his left, splitting Arthur and Bayless. 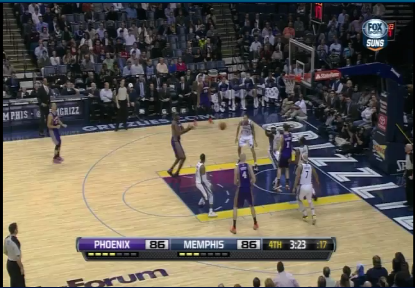 Surrounded by three Grizzlies, Dragic makes the smart play and dumps it off for O'Neal, who is rolling down the lane. 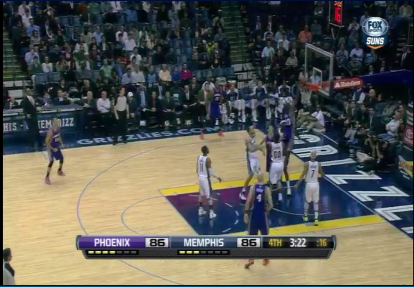 And boom goes the the dynamite. A dazzling dime by Dragic.

This was really the only time the Grizzlies stopped Dragic all quarter. He sets up a pick-and-roll, but this time Memphis is successful with the hedge. However, Dragic attacks anyway, looking for the foul, and puts up a terrible shot attempt. No call.

This was the ridiculous play where Dragic used a series of pivots and fakes until Memphis stopped defending him. 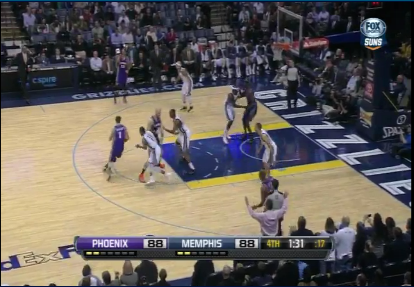 Dragic takes the hand-off from Gortat at the high post and curls off him, using the big man to set a screen. 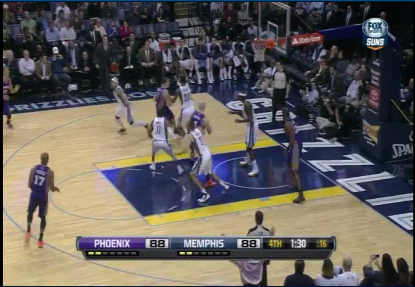 Dragic tries to drive, but Arthur steps in front of him and forces him to pick up his dribble. At this point, it looks like the play is dead and he has nowhere to go. 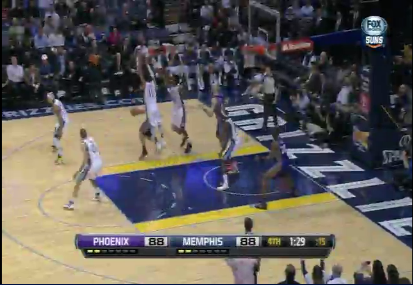 Instead of trying to pass it back out, Goran uses a pump fake to get Conley in the air. However, Arthur is still between him and the basket. 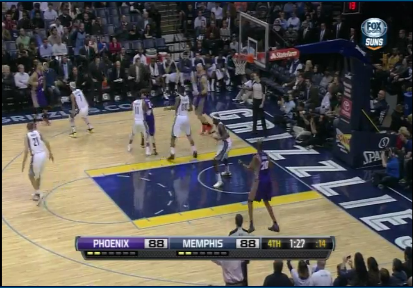 Conley recovers and Arthur is still there, so Goran fakes a pass out to the perimeter, tricking the Grizzlies into relaxing a bit. 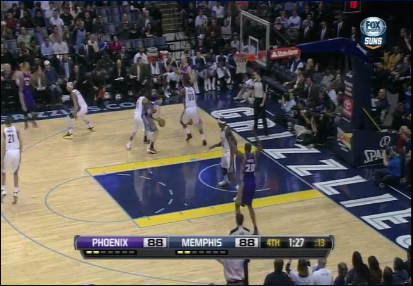 Goran turns back towards the basket after the fake and finds himself wide open, as Conley is still above him and Arthur inexplicably decided Gortat in the corner was a bigger threat than Dragic was eight feet from the basket. 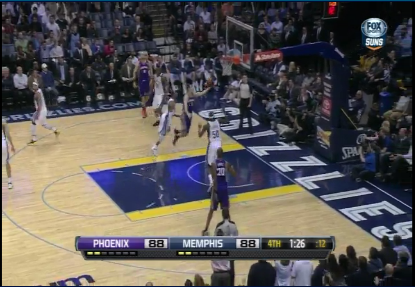 So with the big man no longer blocking his path, Dragic elevates and finishes for two.

This was an incredible display of balance and patience by Dragic. I think I may have even missed a fake or two (tough to screen cap every one). And he did in fact keep his pivot foot down the whole time, so no travel.

On this trip down the court, Dragic used a couple screen and got knocked down as the big man tried to get out and hedge. The Suns were in the bonus, and Dragic knocked them both down.

Dragic ended his run with a killer cross-over and pull-up jumper. 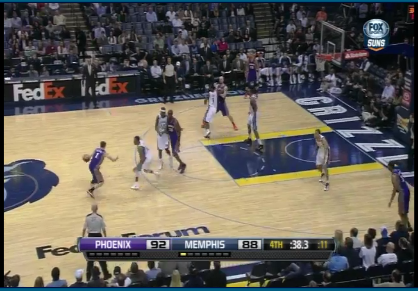 Dragic dribbles some time off the clock before getting into his move. He starts heading to his left hand, hesitates for a second, then... 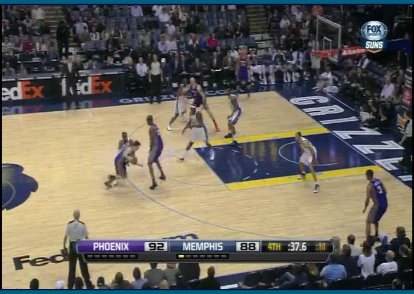 He blows by Conley with a sick crossover. 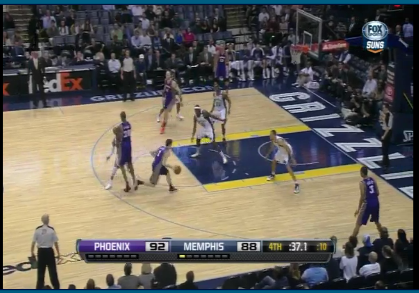 Even better, after the crossover Dragic ran Conley off an O'Neal screen, completely freeing him to pull up for the open elbow jumper. Buckets.

That last jumper concluded a 15-point, 2 assist quarter for Dragic that I'm sure induced several flashbacks to the 2010 playoff series against San Antonio. It was a masterful performance by Dragic, one in which he did almost everything right. Marshall may have brought the ball down the court the majority of the time, but Dragic was the one running the point on offense and making things happen. Dragic was unstoppable on and off the ball, and he carried the Suns to victory.

It's unlikely that we're going to see anything like this again in the near future, but let's hope Dragic can carry some momentum over into this weekend (again, let's ignore that game against the Pelicans). We're going to need him to channel his inner Dragon all game long to have any shot in this home and home against Oklahoma City.