Both of these 22-win teams are coming off a Friday night game and both teams are well out of lottery contention. That's about where the similarities stop between the Washington Wizards and the Phoenix Suns.

Living in the D.C. area since August, I can tell you there was some real hope that this Wizards team might be ready to jump from perennial cellar dwelling to legitimate playoff contender. Then it was announced that John Wall hurt his knee and would miss the start of the season. Then Nene also went down. Next thing you know, the Wizards are 0-12 to start the season and any chance of this team competing for the postseason went up in a puff of smoke.

Is John Wall turning a corner? 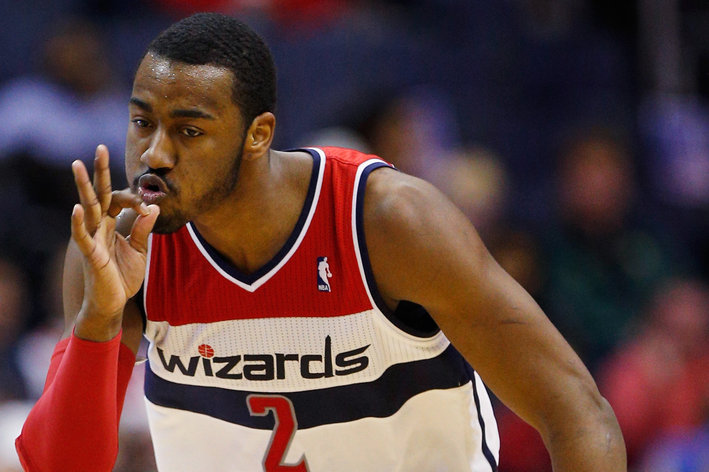 Bullets Forever explores the development of John Wall after one of his best shooting games ever.

But John Wall and some of his other injured mates came back. Rookie Bradley Beal learned the ways of the NBA and began to show us all that incredible potential we saw from the Florida shooting guard. The Wizards are now 18-18 since January 1. That .500 record extended over a full season would have them right where the optimists predicted -- fighting for a playoff birth.

That's a lot of words to point out that the Wizards are on the rise. John Wall continues to mature. Beal's incredible talent slowly translates into success on the court (I think Beal will easily be as good as a healthy Eric Gordon and perhaps be in James Harden's class.) The knuckleheads like Andray Blatche, Nick Young and Jordan Crawford are gone and in their place come veterans like Nene, Emeka Okafor and Trevor Ariza

Baring some kind of miracle, it will be at least two or three years before your Phoenix Suns are where the Wizards are now.

Baring some kind of miracle, it will be at least two or three years before your Phoenix Suns are where the Wizards are now.

This game is the first of two times these teams meet this season. The Wizards will be in Phoenix on March 20 to close out the much-anticipated season series.

The Suns beat the Wizards in their one meeting last year, 104-88. Wall had 10 points while Gortat (20 pts) and Frye (19 points and Nash (11 assists) led the Suns. Of course, none of those Phoenix players will be involved in Saturday night's affair.

Aside from the outcome's impact on the lottery ball chase, the most important and interesting aspect of this game is the point guard battle between Goran Dragic and John Wall.

Here's their season numbers via Basketball-reference.com.

Wall has the slight edge in raw numbers while Goran is the more efficient player.

Watching them play, it's obvious that John is the more athletic of the two, but that gap isn't overly large. Wall's biggest asset is his ridiculous speed and ability to get by pretty much anyone. He's got good vision and passing that makes him into a classic drive and kick point guard and he's surrounded by decent shooters in Webster and Beal and bigs that can finish in Nene and Okafor.

Goran is a much more well-rounded player. He's the better "pure point" and a much better shooter. He's playing this season with a less talented supporting cast.

I tend to think we will be sitting here in 10 years agreeing that Dragic is the better player. That's not a given by any means, especially if John can improve his shooting and puts up more games like he did Friday against the Hornets. He went 9-12 from beyond 10 feet for a very rare sharpshooting performance. The man has a total of six three's on the season.

I can see Wall and Dragic playing to a draw while the rest of the Suns struggle to keep up with the slightly superior supporting cast in Washington. Unfortunately, we may not get to see Bradley Beal.

Bullets Forever has the injury report and preview from the Washington side.

Wizards vs Suns preview: Will Wall's daggers blot out the Suns? - Bullets Forever
Trevor Ariza, A.J. Price and Bradley Beal are all up in the air for Washington.

Suns should field the same unit they did in Atlanta. I'll be at the game saying hi to my old pals.