What happened to the Phoenix Suns fight and what can Robert Sarver do about it?

The Phoenix Suns are not a good basketball team right now. Since changing coaches, however, they are even worse. Is Lindsey Hunter to blame? We look at what Robert Sarver might do with this team.

Share All sharing options for: What happened to the Phoenix Suns fight and what can Robert Sarver do about it?

Remember back in the good old days of November and December of the year Two Thousand and Twelve when the Phoenix Suns were generally going to give you a competitive fight every time they took the court? Those days are gone.

I have a hard time believing that anyone who's watched this team this season would dispute that the 48-minute fight is a thing of the past. But here's some numbers showing that the team is worse since Lindsey Hunter took over and changed 80 percent of the defense and about 55 to 60 percent of the offense (Jared Dudley's numbers).

Under Alvin Gentry, the Suns lost six of 41 games by 15 or more points.

Under Lindsey Hunter, the Suns lost ten of 26 games by 15 or more points.

Under Gentry, the average margin of defeat was 9.87.

Under Hunter, the average margin of defeat is 16.22.

Of course, it's been even worse, 19.33(!), in the six games since Marcin Gortat's injury but even without those six games, Hunter's margin of defeat is still 14.66.

Since we all like pictures, here's a chart showing the margin of defeat for the Suns throughout the season. You can see which direction the trend line is headed. 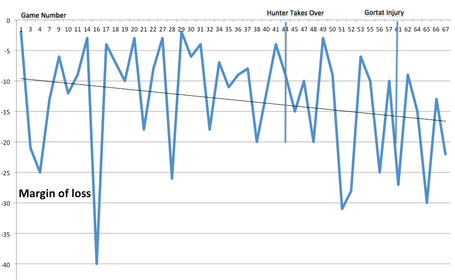 Does this even matter?

Yes. At this point, the Suns record is only relevant as it relates to the team's chances to win the draft lottery. But HOW you lose games matters.

It matters to the organization trying to build a winning culture out of the ashes of...a winning franchise. It matters to an interim coach who wants a permanent job so he can completely overhaul the offense (whatever that might mean). It matters to the fans who don't want to see their team roll over at the first sign of adversity and get run off the court.

Is it really Hunter's fault?

"I think that being the end of the year it's going to affect us mentally. That's just being honest." -Jared Dudley

There's really no way for me to tell you if the team has "bought into" Lindsey Hunter or not. Are they just not responding to him and therefore not playing hard or are there other things at work such as this excuse given to me by Jared Dudley:

"I think the drain of the season. I think that we've been getting beat down, getting lost sometimes. I think that mentally, it can get to you. I think that early in the year your energy is up...I think that being the end of the year it's going to affect us mentally. That's just being honest. Sometimes that happens. It's not what you want to see but at the end of the day, that's where we're at right now."

I have sympathy for that. These guys are people too. A lot of them don't have much to play for at this point and it's painfully obvious this group lacks the chemistry to fight hard for each other. They realize where things stand. They know fans are rooting for losses now.

So now when the other team goes on a run, whatever fight the Suns brought into the game deflates. The other team smells bloods and attacks like a pack of hungry sharks. Things only get worse as a few guys try too hard to do something on their own either to pad their stats or just because they think they can be the one to lead their team back. The ball starts to stick making the opponent's defensive job even easier. Next thing you know, they are down 20 and there's nothing left in the tank.

There will be exceptions to this. There will be nights when the other team is having their own issues or where a guy like Michael Beasley gets hot enough to carry the Suns. But in 13 games since the All-Star break, the Suns have lost nine (all by large margins) and have won five (all by small margins). That's a large enough sample size to define the pattern this team is in right now.

I don't envy Lindsey Hunter's job. He's trying to find guys that want to play hard but he walked into a tough situation and now he's lost his starting center for the season. In the middle of that, he's trying to completely remake how the team plays on-the-fly, all the while using an ever-changing combination of players.

What will Robert do?

This summer, Robert Sarver is going to be faced with yet another pivotal set of decisions. After the 2010 Western Conference Finals run, he somehow managed to let Steve Kerr walk and made a total mess of the post-Amare world by bringing in Hedo Turkoglu, Josh Childress and Hakim Warrick.

Will he dump Lon Babby and Lance Blanks and likely by extension, Lindsey Hunter (who's self confidence seems to have won Blanks over)?

If he does decide to go in a different direction, he'll need to move very fast so the new front office can have as much time as possible heading into the June draft and July's free agency period.

But a change now also means another reset of the rebuilding clock. New front office architects are going to want to draft all new blueprints and ditch what's in place. That takes time and will likely set things back a full season.

If he sticks with Babby, he's endorsing what this team has done since July 20, 2010. Fair or not, there's few people nodding their heads in approval over what's gone on in the Babby/Blanks era of Suns history.

Lon says he knew it would be difficult when he took the job. That's fair. There's little chance this team wasn't going to bottom out. But fans of this franchise aren't accustomed to losing and are rightly afraid of jumping on the perpetual rebuild cycle like we've seen from the Kings and Bobcats...and Arizona Cardinals.

It's a difficult decision to pull the plug or stay the course. That's why Robert makes the big bucks.

Robert Sarver is a difficult guy to understand. He's not the caricature of the cheap banker-owner that a lot of the national media makes him out to be. He's certainly passionate about winning and is generally well-liked by a lot of people in the organization.

It's a difficult decision to pull the plug or stay the course. That's why Robert makes the big bucks.

My sense, correct or not, is that he's easily influenced when it comes to basketball decisions. I hope he spends the rest of this season talking to people he can trust...I'm just not sure who those people are. Robert can't just call up Pat Riley and seek advice. Maybe he can chat with Jerry Colangelo? I don't know.

I just hope that Robert's instincts prove right. I have no idea what I'd do in his shoes and while you might like to think you do, you don't.