This was the winning advertisement done in a contest that included nearly 100 total students at Trevor G. Browne High School in the Marketing 1-2 Class. There were a lot of creative designs and submissions, but this one stood out above the rest as the winner! (better picture below)

Thanks to the combined efforts of Bright Side of the Sun reader UASun, editor Dave King, and the staff as a whole we were able to get our hands on a few pairs of tickets for some deserving kids. We gave a pair to sixth grader Joel Rojas and his father to go and see the Phoenix Suns take on the Washington Wizards March 20th.

The other pair of tickets went to Nicole Gutierrez of Trevor G. Browne High School for tonight's Suns-Lakers game.

Nicole is a junior at TGB and is involved in clubs such as DECA, Be A Leader, and Races United. She is an aspiring journalist and placed at both the Winter and State Tournaments for DECA in role play scenarios. She will be taking her father to the game tonight, against the Los Angeles Lakers.

As for the contest, the premise was simple. The students had to create an advertisement for the Suns using three primary factors; orange & purple, the future, and twins. In it's final form this one hit all three the best. 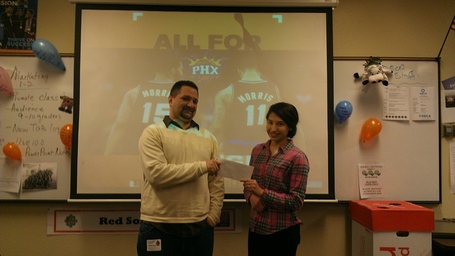 As a local site dedicated to giving the best coverage of the Suns, Bright Side is also dedicated to extending itself into the community getting involved in these types of great moments in kids lives. Unfortunately, Nicole's father is a huge Lakers fan, but that is acceptable for one night as this is a win-win for both father and daughter.

This is an all-inclusive package that includes two lower level tickets, parking passes, as well as accommodations to the Team Shop and concessions.

The common thread between both kids is that they are great kids, great students, and received glowing endorsements from their teachers and the school staff. That is what it is all about. Work hard, kids, and you could be going to a Suns game yourself very soon!

Again, here is the winning ad: 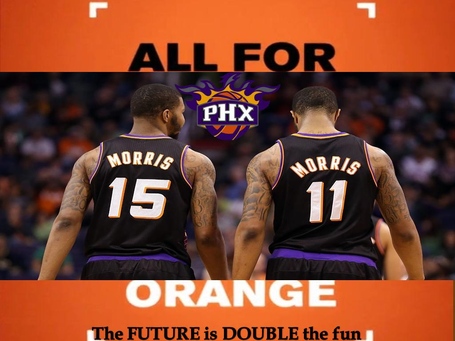 Please take this time to congratulate Nicole and Joel, both will be on Spring Break, enjoying live action on the hardwood.