Since the coaching change and a bottomed-out season hit players with a thud upside the head, interim head coach Lindsey Hunter has given new players an opportunity to play big minutes.

Share All sharing options for: Wesley Johnson, Marcus Morris making most of opportunity with Phoenix Suns

When the Phoenix Suns hit bottom with a 13-28 record, something clearly had to change. Head coach Alvin Gentry had been stripped of his top-end talent over the years, and the players no longer fit the long-time offensive and defensive schemes.

While former #2 pick Michael Beasley got more run than his play deserved, rookie Kendall Marshall and third-year wing player Wesley Johnson (former #4 pick overall) were not yet getting any rotation time. Second-year player Markieff Morris was playing his usual 20 minutes per game, but had shown little progression from his rookie season.

To be fair to Gentry, his mission had been to win games and one rarely wins games by sitting the veterans in favor of untested youth.

But a 13-28 record, worst in the West, thanks to a below average offense and almost-worst defense was not getting it done.

Lindsey Hunter's primary plan as interim coach was to change the mindset of the players, to instill a level of effort and defensive intensity that had helped him last 17 years in the NBA as a backup point guard.

And with no requirement to win every game, Hunter was afforded the opportunity to mix and match players until he could find consistency in effort. He used Michael Beasley as a recent example.

"I don't give [Beasley] more of a leash because of his skill level," Hunter said. "I hold him to the same standards, especially defensively. I know offensively we're all going to make mistakes. We're going to sometimes force shots or not make the right play. I can live with that.

"My thing with Mike has always been defensively. When you're engaged defensively, then I don't worry about you offensively because I know if he's engaged, he'll do some things. But when he's two or three steps slow and not recognizing a rotation or a coverage, then it's hard and it puts a strain on everybody."

Hunter has used variations of that same comment about any and all players on the Suns roster in the past month. He just wants consistency on defense, and believes that offense comes naturally when the defense is engaged.

Unexpectedly, from the fans' point of view, two players have taken advantage of this new opportunity more than anyone else.

In the last seven games since the All-Star break, Wesley Johnson has reappeared from the shadows of the end of the bench to a major role in the rotation.

"The opportunity was given to me," he said. "So I just have to go out there and take advantage of it."

The Suns Not Backing Down 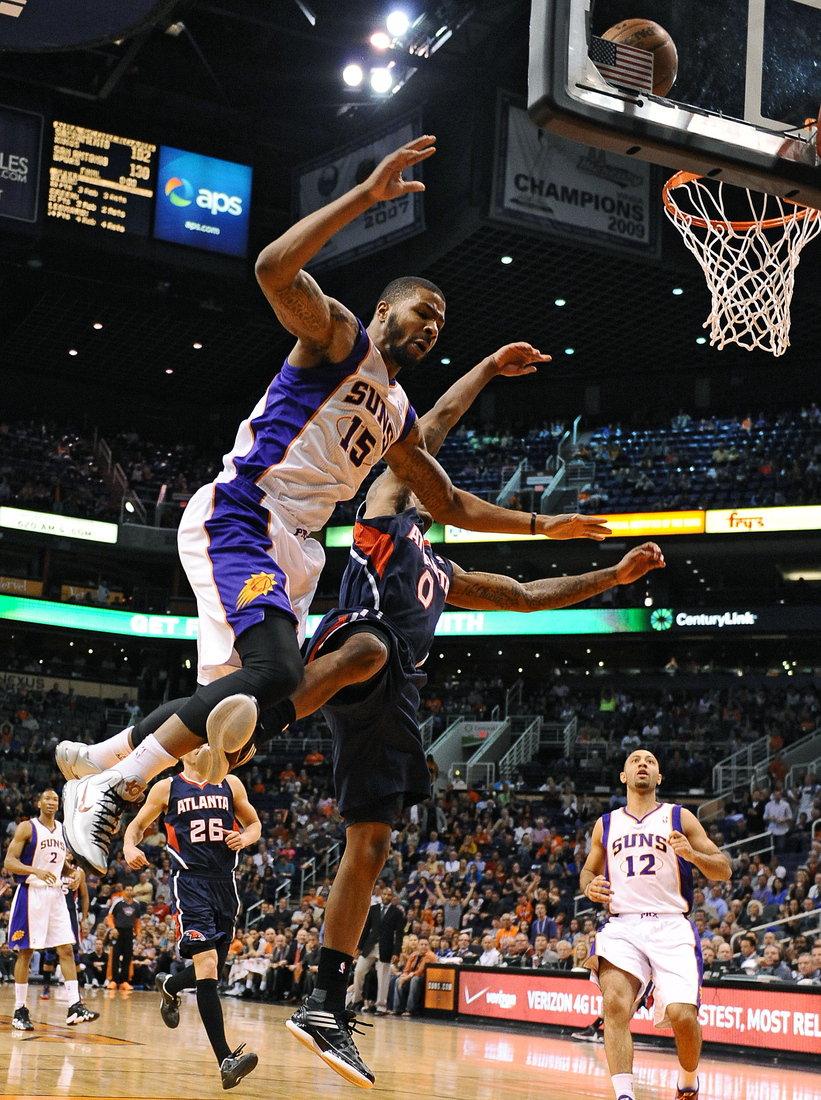 In three of the seven games, all wins, Johnson has played at least 29 minutes and produced at a high level. 14 and 8 against Portland (road), 14 and 9 with 3 assists and 2 steals against his former teammates from Minnesota (home), and 15 and 6 with 2 steals against Atlanta last night.

While those efforts were dotted among lesser outings, this is the biggest impact that Johnson has provided - by far - all season long. And when you watch him out there on both ends of the court, you have to wonder if the Suns could have used that talent earlier in the season.

"Without a doubt, I was definitely frustrated with it," he said of no playing time earlier in the season. "I just feel good being out there playing."

And so do Suns fans when he's on the court. Maybe he will be remembered for more than just his smile after all.

When the Suns acquired Markieff's brother, many fans scoffed at the marketing "diversion" and immediately discounted Marcus' possible impact on the game.

Yet last night he poured in 4 three-pointers on his way to his best outing in 5 games: 16 points, 5 rebounds and 2 steals despite learning the plays on the fly. Literally.

"As you can tell, I know none of the plays," he said. "And [Markieff is] telling me the plays while it's happening. Just the connection, it's there for me."

He has made 6 of 10 three pointers in 5 games for the Suns, a welcome sight to a team that ranks close to last in the league in that category.

"It's easier. They spread the floor," Dragic said of Johnson and Mook Morris. "The defense doesn't want to help so much in the paint. That's what we need. It's easier for everybody to have an inside-outside game."

With four days off, let's hope that doesn't break the momentum.

Many Suns fans want the team to lose every game for the rest of the season, but the players have no interest in that proposition. Zero. Nada.

To that end, there was a heated argument between Dudley and Scola going into a third-quarter timeout, which carried over to coach Hunter and Dudley during the timeout itself.

After the Suns had taken a 50-40 lead in the third, the Hawks made a mini-run while Scola attempted and missed 3 shots in 4 Suns possessions. The shots were wild sidearms and double-pumps in the middle of the Hawks defense and spearheaded by one of the league's best defenders in Al Horford.

"I just told Luis to pass a little bit more," Dudley said of their argument. "The whole point is that we've got to be more of an unselfish, better ball movement team. They were going on a run and it escalated."

"After a while, you get tired of being pushed around, tired of losing close games," Dudley said about the Suns' newfound tougher exterior and scrappy play - even amongst each other.

The fact that Scola and Dudley both sat out the fourth, though, was more about the play of the Morris boys and Johnson than anything they did in that timeout.