Kendall Marshall's shooting stroke, just how bad is it?

We break down Kendall Marshall's performance from behind the three-point line using numbers, pictures and video.

Share All sharing options for: Kendall Marshall's shooting stroke, just how bad is it?

There's been much talk about Kendall Marshall and his shooting stroke. Both Suns President Lon Babby and coach Lindsey Hunter have recently insisted that he's made huge strides since the beginning of the season. Perhaps this is true if you are starting from a point of hopelessness and consider his current state as poor.

Here's the numbers looking at all Kendall's three-point attempts since February 1. This includes a stretch of 24 games with Marshall in the primary back-up point guard role.

Marshall is 15-47 from three (32%) during that stretch. That's not horrible for a rookie who struggles with his shot. It's a number you look at and go...hmmm, OK, maybe we can live with that.

The problem comes when you look at each of those shots and the context they are taken.

For example, did you know that ALL 15 of his makes were assisted and ALL were wide open like this: 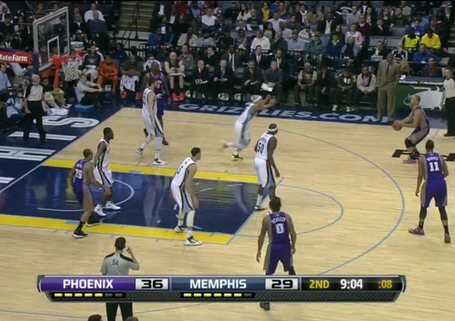 Marshall's threes, which account for 55 percent of ALL his field goal attempts, almost always come from either a pass out of a post double team or from a drive and kick pass from Dragic. On a few occasions, his defender simply backed up off him so far that Marshall felt the need to take the wide open shot he was given. I have no real way to count how many times Marshall turned down wide open shots, but anecdotally from watching him, I think that number would be high...and understandably so. At least he's not forcing shots he's not comfortable taking.

Here's an example of Marshall's defender showing him no respect. Hands down, backed up a few steps -- Kendall took (and missed) this shot. 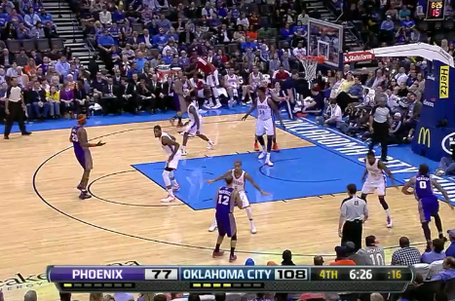 I watched video of 28 missed Marshall threes. 21 were open shots. Four were guarded or at least moderately contested and three were late in the clock heaves. Only twice, Kendall pulled up from the dribble and took a three when his man went under a screen. Twice.

Let's go to the tape and look at Marshall's shooting mechanics which explains why he has to be wide open to take a shot. We know he has a low release point and a funky delivery but that doesn't explain why he's slow getting the shot off.

In this clip you'll see the defense sell out to collapse on Goran's drive in the lane. Marshall's man (Jason Terry) leaves him in the corner and comes all the way across the lane to help on Dragic. Goran makes the right pass and hits Marshall, who's wide open when he catches the ball. But notice how he drops the ball and gathers himself before rising up to shoot. This gives the defender additional time to recover. Kendall still gets this shot off before Terry's hand is in his face, but only because Terry is so far away and is not exactly the most athletic wing defender in the NBA.

In this next clip, the Suns run Marshall off some screens on an in-bounds play (no idea why) and you'll see how open he is on the catch but how long it takes to get the shot off which allows Garrett Temple to fight through and get his hand up. Result = airball.

And finally, Marshall is 0-4 from the corners and 15-43 from above the break with a slight improvement from straight on.

Perhaps I'll look at Marshall's two-point attempts next but I really want to look at all his assists because according to Synergy, he's rated "poor" as a pick and roll ball handler with only .476 points per possession.