The Phoenix Suns, and their dismal 7-28 road record, travel to Utah for a matchup against the Jazz. One's initial reaction would likely be to heavily favor the Jazz in this contest, but the Suns' record in their past 16 games (5-11) is actually better than Utah's (4-12). Will we get the feckless Suns or the team that plays with fervor?

The triumvirate of Al Jefferson, Paul Millsap and Derrick Favors helped Utah dominate the paint, where the Jazz outscored the Suns 60-28. A fast start by the Suns was negated by a season-low nine point second quarter and 20 turnovers. Marcin Gortat led the Suns with 18 points and 11 rebounds, but was apparently unable to provide a defensive presence to stymie Utah's assault in the paint.

The Jazz has been in full scale meltdown mode, hampered by nagging injuries and (mostly) a brutal schedule. By stumbling to a 4-12 record over their last 16 games, Utah now finds themselves on the outside of the playoff picture looking in.

Despite every effort to bungle away a playoff berth, the Jazz are still in a position to qualify for the postseason if they can reverse their trajectory. That's a big if based on their recent ineptitude. The schedule does foster some hope, though, as they have an easier remaining path than the teams competing against them.

The Suns have hit a rough patch that I like to call the 2012-13 season. At 23-48 the Suns will have to go 6-5 just to avoid the ignominious feat of finishing with (a tie for) the second worst record in franchise history. For those of you who haven't been paying very close attention (which includes the vast majority of Suns fans at this point), that ain't gonna happen...

The Suns are a meager 2-9 in their last 11 games, and have lost by an average of 17.6 points in the defeats. A bad team to begin with, the latest futility has been exacerbated by tanking a youth movement. Dave King detailed the salient decrease in veteran's minutes between February and March, which coincided with increased playing time for every player 25 or under, in his recent article "Just how much younger have the Suns gotten this season?"

Goran Dragic has been playing his best basketball of the season since the all-star break, racking up 11 double-doubles (including five straight) in just 18 games. Prior to this impressive stretch he had just four in 53 games. Four. Goran even had his first 30 point game of the season on Sunday against Brooklyn. His improved play hasn't translated to more Suns wins, though, and his numbers were actually worse in the last two Suns wins (15 points and 5.5 assists) than they were in the last nine losses (15.4 points and 9.4 assists).

The Suns (23-48) are poised to finish in the top five in the lottery positioning barring a monumental collapse. It appears the quest for third has become a three team race, with Detroit (24-48) and Cleveland (22-47) as the other two combatants.

The Suns also appear to be on their way to stultifying critics that picked them as the second worst team in the West... by finishing dead last. Shows what they know.

Perhaps the more intriguing race (though not necessarily as important) is another tantalizing trifecta. So what order will the Lakers, Mavs and Jazz finish in? 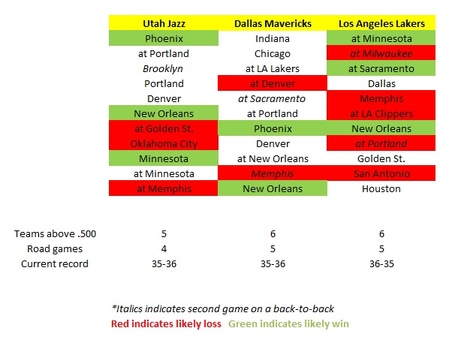 This race is going to come down to the wire and could end up being a photo finish. Utah needs to avoid going 0-2 on their upcoming away/home back-to-back against Portland and Brooklyn. Dallas needs to navigate a tough four game roadie at least 2-2. The LA/Dallas game could be pivotal. The possible X-factor? Portland has four games left against these three teams...

As the season reaches its climax every game matters. Draft positioning is on the line for Phoenix, which could be of paramount importance in preventing recurrences of this historically woeful season. Not only do we get a chance to watch the Suns with rapt attention to discover how the plot unfurls, but we also get a chance to cheer on the Wolves as they attempt to rip the Lakers cold, dead hearts from their vile, pestilence ridden chests (metaphorically speaking... or am I?).