The Suns, unlike some other teams, have not had injuries to fall back on as an excuse for their record this season. Marcin Gortat's ankle sprain Wednesday night against the Raptors is one of the few suffered during the 2012-13 campaign.

Marcin Gortat came down on a Raptor ankle the ground late in the first quarter and exited the game. He had a strong eight point, four rebound performance going through 11 minutes and thanks to some nifty pick and roll play, finished with an impressive 4-6 shooting result in what's otherwise been an inconsistent season for the Polish big man.

Early reports suggest that Gortat will miss some time:

Phoenix Suns end win streak with loss to Toronto Raptors
"I just heard a pop," said Gortat, who has appeared in 182 consecutive games since the Suns traded for him. "I’ll be able to play. Well, I say ‘yeah.’ but the doctors say ‘no.’ I’m out for a few days. Maybe weeks."

Ankle injuries are highly variable from player to player. Some guys' tendons are more malleable than others and, of course for the Suns, there's absolutely zero reason to rush him back into action even with Jermaine O'Neal out for a few days attending to his daughter.

X-rays are reportedly negative for the Polish Ankle. Marcin will likely have an MRI on Wednesday to learn more about the soft tissue situation.

Hamed Haddadi got his first minutes this decade, finishing with just under ten total and a box score line that doesn't merit repeating in public. The Suns were forced to play small for good portions of the game with Markieff Morris playing as an undersized center.

The Suns very well could be facing DeMarcus Cousins and the Sacramento Kings on Friday without Gortat or O'Neal. Who's your Haddadi now?

Here's a screen shot of the moment when Gortat hurts his ankle. It appears he just came down funny. 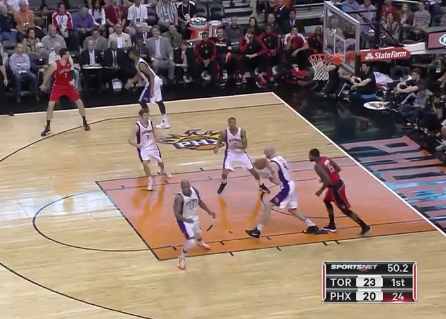