When your best player is somewhere between the 10th and 20th best at his position - PG Goran Dragic - and your top draft pick is in the top 6 overall it makes sense that, despite it being a down year, whoever the Phoenix Suns draft will instantly become the most talented player on the team.

This 2013 NBA Draft has no LeBron James. Heck, it doesn't even boast a Kyrie Irving or even a Damian Lillard for that matter.

Yet, when David Stern calls out a name in the first round of the 2013 NBA Draft for the Phoenix Suns, that player will have the greatest upside and talent on the team.

The Suns' current draft position is #3 overall, but with the lottery, that could move to anywhere from #1 to #6. 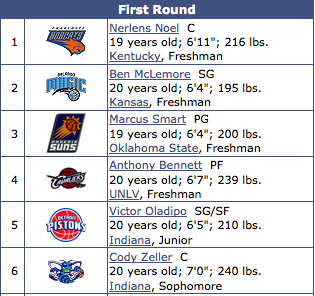 DraftExpress is not looking at team rosters for "fit" yet, but I still think the Suns would do well to bring in Marcus Smart despite having Goran Dragic on the roster. Smart is a big combo guard that gets to the line, is a team leader, and plays relentless defense. Having him and Dragic running a two-headed attack would be a tough matchup for opponents. Remember the days when the Suns forced their opponent to play weird lineups to match up with the Suns? Those days could be back with a Smart/Dragic backcourt.

Ford already has Noel and Smart off the board with the top 2 picks, leaving the Suns with sweet-shooting Ben McLemore. Clearly, McLemore could be a Joe Johnson type that scores consistently on jumpers and screens. Ben's problem is that he's not an "alpha" and the Suns desperately need an alpha next season.

Kris has Nerlens Noel dropping out of the top spot due to knee concerns and going to the Suns. Maybe that's wishful thinking? While Noel's lower body is wafer-thin, he is sturdy nonetheless at 225 at only 18 years old. Noel has tremendous defensive potential and is a clean slate on the offensive end. He will only get better and could be the only contender of the draft to be a perennial all-star and/or player-of-year candidate. 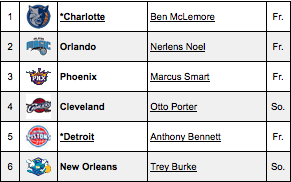 NBADraft.net also has Noel dropping from #1, but not all the way to #3 like Kris did. Here, the Suns get Marcus Smart again. 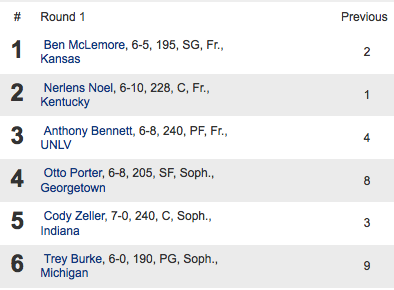 Not even yet paired to teams, the CBS mock draft has a whole different look and feel. Apparently, Anthony Bennett and Cody Zeller are higher-rated, while Marcus Smart doesn't even sniff the top 6.