A study on the Phoenix Suns: Is effort a product of nature or nurture?

Consider this a venture to answer one of life's timeless questions... Is nature or nurture more important in shaping a person's life? Can people change, and, infinitely more important to Phoenix Suns' fans, can effort be taught to or instilled upon basketball players?

Share All sharing options for: A study on the Phoenix Suns: Is effort a product of nature or nurture?

I just watched 42 (which I highly recommend to any movie afficionado) and contemplated the implications on a debate of this subject. Are people born with enmity in their hearts, or is that largely something that is taught to them? Back when Jackie Robinson broke the color barrier on April 15th, 1947 there was still a great deal of animosity solely based on skin color.

A large segment of people lived with seething hatred festering inside of them like a corrosive agent gnawing away at their morals and philanthropic nature. Were these people born hating people that were different than them, or was it something ingrained in their character by countless experiences and teachings growing up? Isn't it likely that their predecessors were equally brainwashed into similarly abhorrent feelings?

Fast forward to the modern day. Racism and discrimination, while still not completely stifled, have severely dissipated as new generations have been taught more tolerance, acceptance and open-mindedness.

Did people just innately stop hating as much or did the pernicious message change to something more altruistic? I believe it was the latter. Just as people were taught how to hate, now they have been taught how to live harmoniously with their fellow man. If hate can be taught, if kindness can be taught, why can't effort? While nature definitely plays a role in shaping a person's life, I believe that nurture is a much more compelling force.

For another example, let us lean on the scenario provided by the curious Randolph and Mortimer Duke in the epic movie "Trading Places." Watch it if you haven't. The Duke brothers made a bet - they would take a person (Louis Winthorpe III played by Dan Akroyd) of culture, privileged upbringing, and impeccable pedigree and attempt to turn him to a life of crime and depravity by changing his environment and circumstances. At the same time, they would transplant a common criminal (Billy Ray Valentine played by Eddie Murphy) who received none of the benefits bestowed on Louis into Louis's former life which the Dukes dispossessed him of. Billy must reverse trajectory and become an upstanding citizen.

The amount of the bet: one dollar.

The two unwitting subjects in the Duke's diabolical experiment experience tumultuous change under the circumstances as Billy ascends and Louis plummets. Only when Billy becomes aware of the Duke's nefarious plot do the two join forces to decimate the Duke's lives in a well deserved example of turnabout being fair play. The tandem also makes a bet. A bet about whether they can get rich while exacting their revenge.

The amount of the bet: one dollar. 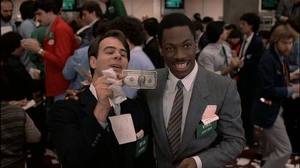 I could give many more examples that support my argument, but somewhere in here I have to fit in a little bit of Suns' basketball discussion.

Can effort be taught? Is it possible to coach inspiration? I think so.

I have personally experienced people gain motivation and pertinacity based on an environment change. I witnessed this dynamic during my time in the Army, especially at boot camp. I have been on sports teams that have come together and barely resembled the incarnation that began the season. I have seen people grow and change. I believe it happens.

There have been times during the recently (and mercifully) finished season where I feel the entire team quit. Going all the way back to the 117-77 drubbing by the pathetically miserable vaunted Detroit Pistons, through the 10 losses by 20+ points during Lindsay Hunter's tenure, there have been times when the lack of effort has been palpable. The team quit.

These instances were compounded by a noticeable lack of effort and dedication from several players on a regular basis. The heart of many players on the roster came into question... Let's look at some of them individually.

Goran Dragic - While Goran has been at or near the top of the effort pyramid, there have been times where he was visibly frustrated and exasperated. This led to a sense of detachment at times, but I don't question Goran's dedication.

Luis Scola - Luis is similar to Goran in the respect that his effort was only compromised by some of the results and the actions of his teammates. He hung his head in vexation over the state of the team, but rarely hung his head on the court.

P.J. Tucker - He assumed Dudley's role as the most tenacious player on the team. Maybe he siphoned off some of Jared's energetic demeanor? Tucker won earned the team's hustle award and was always playing hard, even in the most dire of circumstances. He looks like a player that realizes his NBA career depends on his ability to outwork every other player in the league.

Marcin Gortat - Marcin can be fickle. Sometimes he's engaged, and other times he's checked out. It's fairly transparent when Gortat is fluctuating between truculent play (which we all want out of him) and passivity (which we get more of than we want). To his credit, Marcin realizes his role in the quitting culture the Suns created this year. Changing the culture... way to go Suns.

Jared Dudley - He may have taken the biggest step backwards in terms of hustle on the court, which is somewhat staggering based on the fact that he has made a career out of being indefatigable. Not to say that Jared is the root of the problem, but he just didn't seem to be the same player this year, especially in the second half of the season when his role was diminished.

Jermaine O'Neal - Jermaine seemed to be grateful to get the opportunity to play a productive role in the NBA again, but I still felt his play was uninspired at times. Fault me if you will, but I've never gotten the impression that O'Neal's career has been marked by unparalleled commitment. O'Neal did play well, but perhaps some combination of fatigue, injuries and personal issues may have influenced my opinion.

Channing Frye - I believe Channing would have been right near the top of the totem pole had he been able to play this season.

Now that I've moved through the players who play with excellent to middling inspiration, here's the remainder of the Suns' motley crew.

Diante Garrett (played a whopping 149 minutes), Hamed Haddadi (see Garrett, Diante), Markieff Morris (plays when he feels like it), Wesley Johnson (floats like a butterfly, stings like he doesn't give a f...), Marcus Morris (benched for indolence and insubordination), Kendall Marshall (is he confused by the speed of the game?) and Michael Beasley (whose apathy strangely elicits episodes of stabby rage).

So basically the Suns players over 26 show far superior effort on the court than the players 25 and under. That doesn't adumbrate very favorably for the future of the team. Is there any way to change the culture? In a positive way this time...

Here are the four areas the Suns need to focus on to elicit the right kind of change on this team.

1. Find a coach that can motivate his team, especially the younger and more easily influenced players still in a formative stage. If Hunter's not that guy then get rid of him. It sure didn't look like the team tried harder for him than it did for Gentry. But his evaluation is a topic for a different time.

2. Get better veteran leadership. For all the talk over the course of this season, there didn't seem to be a player in the locker room capable of taking the helm and steering the team in the right direction. The Suns need a player, or a couple of them, that can take charge and lead the team.

3. Sh..can the malcontents having a detrimental effect on the team. Michael Beasley is right at the top of the list, but I wouldn't stop there. I DO NOT want Beasley around our young players, especially the Suns' draft picks this summer. Stretch his ass and send him on his way.

4. Take an organizational stance that won't tolerate apathetic players. Accountability starts at the top. No more players of questionable mental fortitude. Bring in the right kind of guys. Make it completely pellucid that the type of behavior we witnessed this season WILL NOT be tolerated.

I think the culture can be changed if the team takes a largely divergent approach from what we've witnessed this season. I think the team can create an environment that helps players succeed instead of stagnate. I believe that effort can be taught. I believe that people can be inculcated into new outlooks and ways of life as long as they are receptive and teachable. We can all learn. We can all transform.

The team especially needs to reach out to the younger, more impressionable players. Players who feel entitled based on the fact that they have been catered to their entire lives leading up to their NBA careers. At least some of them can change when provided the proper motivation. The right instruction. The right attitude.

If the Suns can actually achieve the culture change they've professed is in the works, I believe they can foster an environment where players experience growth and are taught how to play the right way. It can happen.

I'll bet you a dollar.