The Phoenix Suns (23-51) visit the LA Clippers (49-26) in a bizarre role reversal that would have been unthinkable just a few years ago.

Tonight's matchup features two teams on the opposite ends of the NBA spectrum. While the Clippers are near the zenith of their franchise history and are gearing up for what they hope to be an extended playoff run, the Suns are stumbling along near their nadir as they approach the seemingly inexorable and dubious distinction of finishing with the second worst record in franchise history.

The Suns beat the Clippers 93-88 in Phoenix on January 24th. The game featured a game high 24 point (including a season high 14 free throw attempts), 8 assist performance by Goran Dragic, who took full advantage of Chris Paul being out of the Clippers lineup with a bruised right kneecap.

Los Angeles holds a 2-1 lead in the season series based on two earlier blowout victories.

As previously mentioned, the Clippers trajectory is the exact antipode relative to the Suns. LA's current 49 wins ties the most in franchise history. A win against Phoenix tonight would give the Clippers their first 50 win season in 43 seasons of routinely terrible basketball.

Despite that rarified air, the Clippers have limped to four losses in their past five games. Los Angeles will try to use tonight's game as a tune up/slumpbuster before having three days off to prepare for a Sunday ABC contest against the Lakers.

The Clippers are led by the inimitable Chris Paul (second in the league in assists and first in steals) and athletic phenom Blake Griffin, but are both talented and deep.

The Suns are in freefall. In what has been a rudderless season, the Suns have been outdoing themselves of late. A loss tonight would give Phoenix their most defeats (12) in any 14 game stretch this season. Just when you think they've hit bottom somebody tosses them another shovel.

One of the few lambent lights penetrating the gloaming of this season has been the play of Goran Dragic. After a less than spectacular patch in the middle of the season Goran has elevated his level of play to the tune of 16.1 points and 8.5 assists during the recently completed month of March.

Besides Goran and a few transitory glimpses of hope from some of the younger players, most fans seem to be more expectantly awaiting the draft lottery selection show than the remaining games on the schedule. The Suns still need 5 wins to avoid the ignominious feat of finishing all alone with the second worst record in franchise history... and that isn't going to happen.

Jared Dudley: Considering the Suns have very little hope of winning this game, maybe JD can make things interesting based on the comity between Griffin and him.

Dragic/Paul: It will be interesting to see how Dragic comports himself in this game with respect to his recent improved play. Going against Chris Paul should be an excellent litmus test.

The Suns are currently in fourth place in the race for the #1 seed in the lottery, just a half game behind the Cavaliers for third. Using their recent play as a barometer it is beginning to appear that Phoenix will finish no worse than their present position. What may be a deciding factor in the battle for third is the Suns' season sweep of Cleveland, which will result in the Suns losing the tiebreaker.

The Lakers decimated the Dallas Mavericks last night in what was almost surely an elimination game for Dallas. Instead of providing a fervid performance due to the gravity of the situation, the Mavericks practically seemed disinterested and failed miserably with their playoff aspirations on the line. What could have been a crushing blow to the Lakers instead propelled Los Angeles back to a dead heat with the Utah Jazz. Thanks Dallas.

Utah has a pivotal game at home against the Denver Nuggets who, while obviously a superior team, are just 17-21 on the road compared to Utah's 28-9 home record. Go Utah. As the table below indicates, this race may be a photo finish. 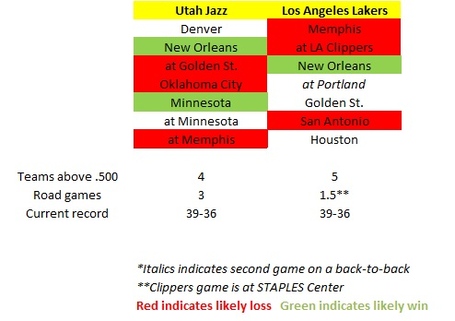 The Suns (7-29 on the road) are facing an uphill battle against the Clippers (28-9 at home). And by uphill I mean a sheer cliff face. Completely vertical.

But weirder things have happened and I'm still interested in watching Goran and the other young "talent" on the roster. The way this season is winding down the games are all win win. Either you can celebrate a rare Suns' victory or you can celebrate improving lottery odds.