The Phoenix Suns attempt to avoid the teams's longest home losing streak in franchise history tonight as they host the New Orleans Hornets.

It’s meaningful game time. Tonight’s contest against the New Orleans Hornets affords the Phoenix Suns their best opportunity to avoid the opprobrious feat of adding the franchise’s worst ever home losing streak to a season filled with dismal results. That’s right Suns fans, the team is currently tied with the worst ever such streak at six and can take another step towards ignominy with their seventh consecutive defeat on their home court tonight. A loss would also put the Suns’ overall current skid to nine straight before the Suns embark on a three game road trip starting Tuesday which could push them into a tie for the overall franchise futility mark at 12 consecutive losses. Hasn’t this season just been special?

Where: US Airways Center Phoenix, AZ

The Suns lost to the Hornets at New Orleans Arena 93-84 on February 6th. Greivis Vasquez paced the Hornets with 19 points (8-9 shooting) and 12 assists. Phoenix was led in scoring (14) and rebounding (7) by Marcin Gortat. If you hadn’t discerned from the 84 points or Marcin’s underwhelming team leading stats, it was one of those games… The Suns muddled their way to 31 second half points and, amazingly, managed to shoot just 1-15 from three point range (6.7%).

The season series is tied at 1-1, with each team winning on their home court. This game will be for bragging rights between the two worst teams in the Western Conference.

Despite a brutal recent schedule, New Orleans has fought its way to a 4-4 record with home wins against the Celtics, Nuggets and Grizzlies. Hampered by minor injuries, Anthony Davis has struggled to met the lofty expectations that coincide with being selected #1 overall, but has been progressing steadily and averaged 16 points and 9.9 rebounds a game in the recently completed month of March. Hidden gem Vasquez is averaging 14.2 points and 9.2 assists (third in the NBA) per game and is establishing himself as one of the best unknown players in the league.

Watching the Suns season long descent into the bowels of the NBA has been a somber and funereal process. I would almost be completely emotionally detached at this point, but the sporadic lack of effort is still aggravating at times. I know I’m trying to have my cake and eat it too, cheering for losses and effort at the same time, but being repeatedly brutalized to the effect of 25+ losses isn’t just demoralizing to the players, but the fans as well…

Oh well, playoff losses are demoralizing too, so it’s not like disappointment has been uncharted waters for the Suns before. The numbness that has settled in over the season like a thick fog also takes the sting off of repetitive bludgeoning. The Suns will have to do a lot worse than this to alienate me.

Goran Dragic’s renascent spectacular play has been a beacon through the fog, though, and he has collected 11 double doubles since the all-star break. Goran has even record two games of over 30 points in his last four played (when he wasn’t resting due to lassitude).

Dragic vs. Vasquez: Goran has averaged 16.5 points and seven assists in the two previous games in the series. While there is nothing wrong with those numbers at all, Vasquez has been decidedly better with 22 points and 13 assists over the two games. Will Dragic turn the tables tonight?

The Suns (23-53) enter their contest against the formidable Hornets in sole possession of the third worst record in the NBA. Pretty much right where most of us soothsayers had them pegged at the beginning of the campaign. The Suns main competition for their current position is Detroit (25-52) and Cleveland (23-52). Even with a win over the Hornets, the Suns could maintain their slim lead if the Cavaliers can successfully defend their home court against the vaunted Magic in a game that will be decided just before Phoenix steps on the court tonight 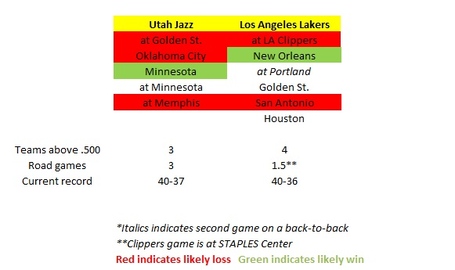 The Suns hopes of receiving the Lakers draft pick have fallen squarely on the shoulders of the Utah Jazz. Unfortunately, Utah finds itself on a precarious perch with a road game against Golden St. today followed by a home game against the Thunder on Tuesday. The Lakers play the Clippers at the Staples Center today (basically a neutral site) before hosting the same Hornets the Suns host tonight on Tuesday. There’s a distinct possibility that Utah could lose both of those games, which makes today’s Clippers/Lakers game of paramount importance since a two game swing at this juncture would effectively secure the Lakers the eighth and final seed.

As much fun as the carousel of dubious distinctions has been this season, it would be really nice for the Suns to win this one and escape another scrape with infamy. In my world, the Suns beat the Hornets tonight, bust the slump, lose out from here and still secure the coveted third spot in the lottery seeding.

Get to work Suns! Make my vision a reality. And go Clippers and Jazz!