As the NBA Draft Lottery selection draws near, the teams are anticipating finding out where they will be drafting. The Suns are currently slotted in the 4th spot, but that can, and likely will change depending on how the lotto balls bounce. Here is a look at the complete odds, and the history of the 4th slotted pre-lottery position; and where those teams actually ended up drafting.

Today, the Phoenix Suns find themselves in nearly uncharted territory for this proud franchise. The Suns have only picked 7th or lower (the range we fall in this year) a total of seven times since the franchise began in 1968. So what can the Suns realistically expect to happen being in the fourth slot? Here is a brief history of what has happened to the other teams in that position prior to the lottery selection over the past 29 years:

Now, lets compare this with the actual lottery odds for each pick: 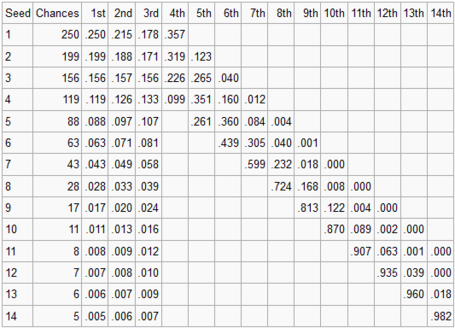 This shows that the Suns who are currently slotted in the 4th position of the lottery have a 11.9% chance of winning the first pick, and only a 9.9% chance of staying put in the 4th spot. In fact, the odds of moving up to the 2nd (12.6%) or 3rd (13.3%) spots are both higher than our odds of drafting 4th overall as well.

So that's good news...kind of.

So basically there is a better chance that the Suns end up with a later pick than an earlier pick, with the smart money on the 5th spot.

Maybe lightning can strike twice in a row?

We won't know for sure until May 21st.