The second round of the playoffs has concluded and a small group has gained separation from the rest of the huddled masses. Read on to see the luminaries that lead and the lunkheads (like me) that lag behind.

My takeaways from the second round series:

After a valiant game one effort the Bulls finally succumbed to the injuries that have plagued them throughout the regular and postseason. It would have been interesting to see how the Bulls fared if they would have had five players healthy enough to suit up for the games. The Heat prevailed with half of Dwyane Wade against half of the Bulls roster, but will the Pacers prove a more dangerous adversary if Wade isn't at full speed?

The Knicks hero ball style was exposed by Indiana's teamwork and stout defense. Carmelo Anthony, who finished third in MVP voting (really?), managed to chuck up 18.75 shots for every assist he dished during the series. His appurtenance in the black hole philosophy, J.R. Smith, shot a putrid 29%. Roy Hibbert made Tyson Chandler look like a little boy. The series went six, but it didn't really feel that close. Credit Indy's hermetic defense for that. They forced the Knicks into becoming a jump shooting team with their inside presence, then turned them into a downright crappy offense with their stellar perimeter d.

This series cemented the value of Russell Westbrook. The critics that propounded he was holding Kevin Durant and the Thunder back were summarily silenced. Oklahoma City was a completely different (worse) team with him off the court, and Westbrook's injury may have been the single biggest event that changed the postseason landscape. The Grizzlies smelled blood and capitalized by imposing their style on the series. Memphis, who had the slowest pace and allowed the fewest points during the regular season, stifled the Thunder by holding them under 100 points in every game during the series.

The Spurs entrenched themselves as the horror movie villain that never dies and the Warriors proclaimed that they have arrived as an up and coming team (if they can stay healthy). While Stephen Curry had pundits gushing over his performance, a nagging injury (bet you've never heard nagging injury and Stephen Curry in the same sentence before!) may have caused his production to dwindle as the series went on. This, compounded by David Lee's absence, helped seal the team's doom. That and the fine tuned machine of excellent role players led by all-star Tony Parker. Anybody else notice how most of the "stars" are already sitting on their couches?

Now the results you've all been waiting for (or have already looked at by skipping my inane ramblings): 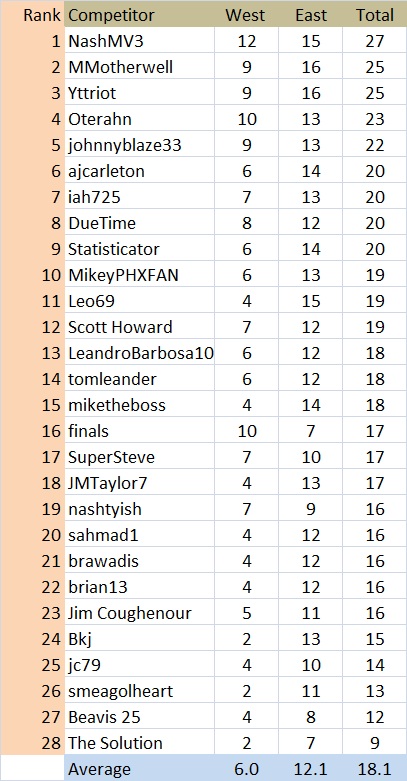 NashMV3 still leads the way, but MMotherwell, who has the Spurs advancing, and Yttriot are still right on his heels. The ouster of OKC knocked out the majority of people's, myself included, Western Conference representative for the NBA Finals. Chances are it will be a photo finish so make sure your score is correct!