Phoenix Suns 2012-13 Player Review: Jared Dudley - should he stay or should he go?

Jared Dudley was one of the best Phoenix Suns players last year, yet his ceiling is a solid starter or great sixth man. Should Dudley be traded for youth, or should he be kept to help Jeff Hornacek rebuild his team - kind of like a player/coach?

Share All sharing options for: Phoenix Suns 2012-13 Player Review: Jared Dudley - should he stay or should he go?

Whether Jared Dudley was in the starting lineup or not, his production was remarkably consistent. You knew what you were going to get when Duds hit the floor.

His production per minute was consistent no matter the role. So while Dudley would prefer to start games for the Suns, he is also the first to recognize that it doesn't matter who starts as long as the best player gets the most minutes. If the Suns draft Victor Oladipo or Ben McLemore or C.J. McCollum later this month, Dudley would most likely not be the starter. In fact, whoever the Suns draft would likely get more minutes than anyone got last season next to Goran Dragic, leaving even fewer for Dudley to play unless he shifted back to small forward.

But one thing is true: "Every time I was on the floor, we were a better team," Dudley said.

Check out Dudley's effect on the team per 82games.com 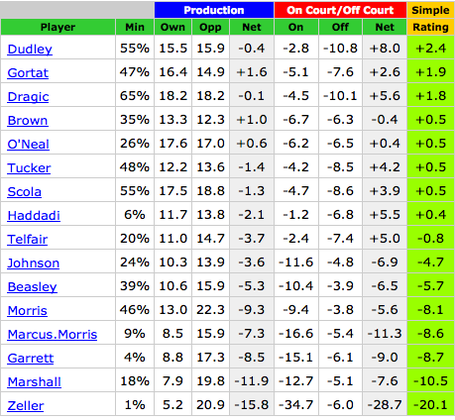 "In the NBA, for the most part, you win with veterans," Dudley said.

As you can tell, the Suns most effective players were their veterans. But before you start pounding the table to keep and play Dudley, Gortat and Brown next season, remember that this particular veteran-laden lineup still only won 13 of their first 41 games.

Throughout the NBA, it's definitely true that veterans win more games than a lineup of kids. The Suns and Mavericks were the only "older" teams to miss the playoffs last season, while Houston and Golden State were the only young teams that found a way to win enough games to make it.

But that just goes to show that other teams have already figured out what it took the Suns too long to learn: don't play veterans if they don't take you deep into the playoffs.

Dudley, at 28 next season, fits into the mold of "older guard". If the Suns are playing him big minutes in 2013-14, it means they want to win as many games as possible. Yet, if that ceiling is 35 wins, is that worth it? Is it worth sacrificing the chance at a superstar draft pick in 2014 to win 5-10 more games because Dudley got the minutes?

Dudley recognizes the difference between a playoff team and a rebuilding team.

"When you're out of the playoffs you can do stuff like that," he said of his reduced minutes in the second half of the season. "And you should do it to see what your talent is, going into the off season."

But what if you start the season in rebuilding mode from day one, already out of playoff contention? Do you play your 28 year old veteran sixth man a lot of minutes to win a few more games? Or do you play the young guys to help them develop and shorten the down period?

For Dudley's part, he was waxing philosophical at the end of the season. Every veteran, to a man, suggested it was time for the Suns to rebuild. Even if that meant trading them to another team.

"For us, we have some veterans that would be good trade bait for more of a playoff type team," Dudley admitted, pointedly.

For his part, Dudley is all about team. He has made himself available on a weekly basis to KTAR this off season, offering his take on anything NBA related. When Jeff Hornacek was hired to coach the Suns, Dudley weighed in the way you knew Dudley would weigh in.

"Me and Jeff Hornacek we don't have the great physical abilities of someone else, but what I've seen from him, he was a hard worker as a player," said Dudley to KTAR/620 after Hornacek was hired. "I heard good things from different players in Utah about him being a shooting coach and everyone liking him. That's kind of my style: hard-working, team guy and guys liking me.

"I'm excited to get to work with him. Any time you bring in need blood and new energy it turns out pretty good."

Hornacek was brought in to herald the rebuilding era. New GM Ryan McDonough has targeted the wing positions as the most important to upgrade, as representative of the biggest hole on the team.

But Dudley still finds the positives.

"I definitely believe [this hire is good for me]," said Dudley. "Not only me but the team, because when you get into the team concept we all do well. When you see the Spurs -- and I hate to use the Spurs because that's our rival -- but that's a team. They're successful for a reason.

"Do they have stars? Yes. Are some of them aging? Yes, that happens. But from the role players, everyone has a job, everyone does their job."

Dudley knows the Suns fortunes are not going to turn around overnight. At least publicly, he is excited about the future with the Suns and wants to be part of the team.

But he might be past his prime before he sees the playoffs again, if he stay with the Suns. He's not quite old enough to want to be the player/coach who sacrifices his game for the betterment of the youth.

"In the NBA, there's nothing overnight," he says. "These Suns draft picks in the next two years can set up you up for the next four years."

He said to win a lot of games you need superstars, and the only way to get a young star through trade is to have enough young talent on the roster to entice the other team.

"If you look at now how people are getting these other stars," he said. "You've got to have young talent to go trade for those. You can get a Harden type, even though they gave up [veteran, expiring Kevin] Martin, they gave up picks [a 2013 lottery pick and 2012 lottery pick, Jeremy Lamb, along with other young pieces]. So if you want to get those guys you're gonna have to give up young assets that are talented that they see potential."

The Suns don't have a bevy of young talent that are teams are coveting. Kendall Marshall won't get you a star, and neither will the Morris brothers.

To get back to the NBA elite, the Suns need assets. The Suns need to stockpile enough young talent that (a) they can afford to trade without emptying the cupboard and (b) is talented enough to still entice the "buyer" into completing the trade.

Trading Jared Dudley for another first round pick in the 2013 Draft might just be the best way to return the Suns to the NBA's elite. The #5 pick needs to stay with the Suns as a building block. The #30 pick won't be good enough trade bait to garner a star. A pick right between those guys (or two picks, if Gortat is traded for the same reason), could add to the Suns tradeable stockpile.

If you can turn Dudley into a 19-21-year old that other teams see as a potential star - like Houston did with middle first-rounders last year - then maybe you trade Dudley to do it.

Otherwise, you keep Dudley to help coach and develop the younger guys bound to take his minutes from him. Would he even be happy in that role?